Loma fills the air around you less like music and more like water, as if being submerged in an unfamiliar, cooling darkness. Haunting and peculiar, Loma stacks a homegrown supergroup of sorts by pairing Shearwater majordomo Jonathan Meiburg with Austin duo Cross Record: singer Emily Cross and audio engineer/multi-instrumentalist Dan Duszynski. The trio's self-titled debut of experimental nightmare folk throbs with a supernatural presence, even if the sounds of commonplace nature – rain, chirping birds, the landscape of Dripping Springs – serve as bedrock for the sound, most explicitly on the cinematic "White Glass." Needling "Relay Runner" skitters a nerviness, the closest thing to a pop song on Loma, but even then its obsessive, frenetic energy skews dark. The sparse, crystalline "I Don't Want Children" quivers with a deep-seated melancholy, Cross' lithe vocals forlorn, a sigh of pre-emptive regret: "I don't want children, even though if I did, I would want them from you." By contrast, "Shadow Relief" spins sweet and nearly hymnlike, while the imposing "Jornada" plods with a near-industrial sound. Loma implores one to look – and listen – closer. 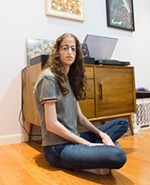 How a Genetic Disorder Drove Abby Solomon to the Forefront of Science and Music
After supplying a scientific breakthrough, this Austinite improves one show at a time