Beginning in 2003 and over the course of five full-lengths beginning two years later, Dayton's Erika Wennerstrom shepherded the Heartless Bastards, who relocated from Ohio to Austin in 2007, through mountainous peaks of titanium rock, her mighty vocals surging to Seventies classic rock proportions. Following 2015's Restless Ones, the quartet's second for Partisan after three LPs for Fat Possum – the latter imprint famously nudged by the Black Keys' Dan Auerbach after a show Wennerstrom recalls as "two drunk rednecks and him" – the Bastards called a hiatus, which here allows the frontwoman a full range of creative uplift.

Cruise I-35 on "Twisted Highway," where the lead-off amp feedback and climactic distortion drop into an expansive stretch of rumbling percussion and reverb-laden fretwork that recalls 2005 HB debut Stairs and Elevators. Likewise, "Letting Go" and "Time" whiff the subdued instrumentation of 2009's The Mountain, entwining plumes of wistful twang. Wennerstrom's new transcendence finds her voice stretching to a widescreen panoramic not fully realized in the raucous Heartless Bastards discography.

On "Like a Bird," her voice ripples soft and gentle, while interstellar standout "Extraordinary Love" launches her gritty, blues-rock register to the unexplored final frontier as melodic guitar lines soar above an atmospheric bed of echoing chord slabs and buzzing solos. Previously, her soulful bass tenor soaked up heartbreak and desperation. Now, it voices contentment on 10-minute opus "Good to Be Alone," which attests, "I'll rest my bones, sitting here at home. It feels good." 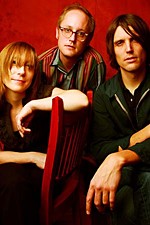 I Could Be So Happy
Erika Wennerstrom, not just another Heartless Bastard