Playback: Does Size Matter at SXSW? 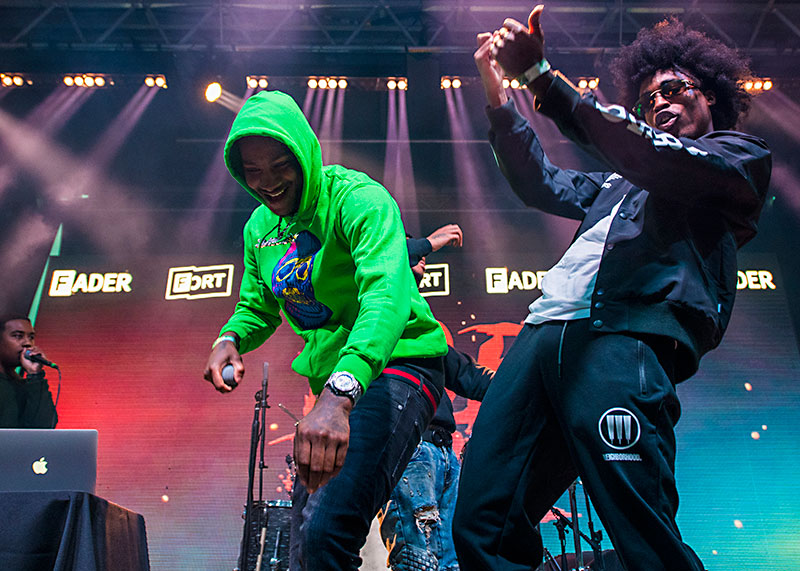 Everyone noticed, though some were too polite to point it out. Others made a big deal of it. South by Southwest's Music week experienced significant shrinkage in 2018.

Variety foreshadowed the phenomenon with the article "For SXSW Music, Bigger Isn't Necessarily Better," in which music festival general manager James Minor revealed he's been focused on quality over quantity the last three years. And indeed the hysteria whipped up by SXSW has ebbed since 2014's overblown year of Lady Gaga equating Doritos dust with "bold" lifestyle choices, but last week played out especially manageable. The least common phrase uttered during music week was "one in, one out."

The brands that footed the bill for headliners in recent years – YouTube, Apple Music, Amazon, and Spotify – scaled back music presentation at the 2018 conference. The Mohawk, typically a marquee venue during SXSW, had a slow week on account of their longtime footwear beneficiaries not doing the usual House of Vans series and low-key official SXSW programming. GM Cody Cowan told "Playback" mid-week that he projected the club's overall revenue for the week down 30%.Clubs relying less on big brands and SXSW headliners – like the consistently packed Hotel Vegas – weathered the downsize better.

Even in a year that felt distinctly tame or, for some, a return to its roots, SXSW Music week typically offered more unique experiences than any one individual could possibly absorb. Thus, "Playback" can only attempt to contextualize it by conducting an exit interview with itself.

Who Was the Headliner?

Definitely not Keith Urban. The Australian pop country superstar only half-filled Stubb's on Friday, proving SXSW audiences far too intelligent for awful mainstream country. El Paso pop star Khalid (Robinson), 20, should be in the conversation, then. His American Teen has hovered near the top of the Billboard charts for over a year and the sensational performance he delivered to a packed Trinity Warehouse on Thursday positioned him as the millennial Marvin Gaye. Some pegged Nathaniel Rateliff & the Night Sweats as headliners given the massive crowd they commanded at Auditorium Shores on Friday, but they don't have the commercial momentum of rap/R&B/trap brethren Rae Sremmurd, who headlined Fader Fort and the Moody Theater the same night by showcasing winning charisma and bountiful energy despite offering half-assed karaoke to their album tracks live. All this is to say SXSW 2018 had no headliner, which is fine because they distract us from discovering new acts.

Shame. Heading into the Festival, the boyish UK act hadn't blipped my radar, but they were repeatedly recommended to me as the week went on by those who had witnessed their intense appearances. When I finally saw them Thursday at Volcom Garden, I was floored by the quintet's sound – a post-punk/indie rock mixture recalling Echo & the Bunnymen, Cable, and the Fall – and their live-wire vocalist Charlie Steen, a once-in-a-decade frontman, who erupted out of his coveralls and implored the audience, "It's okay to smile. You're being entertained." Recent full-length debut Songs of Praise demonstrates their solid musical chops and powerful songwriting. Who Threw a Drink in Your Face?

That would be Starcrawler frontwoman Arrow de Wilde. "Come on you boring South by Southwest fucks," the improbably lanky singer – built like Joey Ramone, but Iggy Pop rabid – baited a Main II crowd, which appeared understandably stunned by how excruciatingly loud the young L.A. glam/sleaze rockers were. Later, Wilde went berserk, chasing audience members before jumping on the bar and knocking over beers. Finally, she grabbed a full vodka drink out of a woman's hand and threw it directly into my eyes. 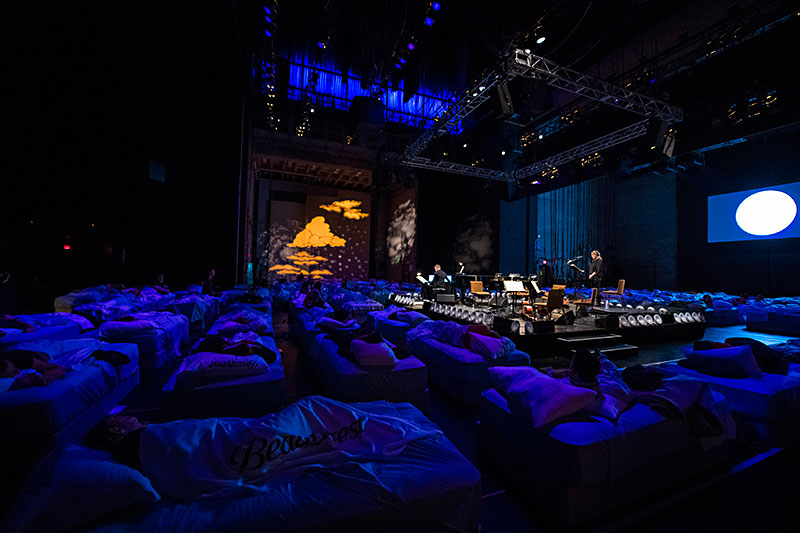 Only on Monday when I went to Bass Concert Hall to take in a midnight-to-8:30am performance of Max Richter's Sleep. "Here comes Sleep. We'll see you on the other side," the London-based composer told the surrounding 150 spectators laying on Beautyrest mattresses that were later donated to area shelters. With a sevenpiece ensemble and hundreds of pages of sheet music, the pianist launched into his 2015 aural doctrine on relaxation. "Playback" stayed awake for the first 90 minutes, enjoying the pulsing movements of piano and soothing strings, while one attendee sawed logs with his nose. Around 4:30am, I woke to a gorgeous non-verbal vocal section that felt like a vivid dream. At 8am, wake-up lights and momentous piano roused the audience for a gorgeous slow crescendo that ended with a standing ovation and agreement that this was a once-in-a-lifetime experience.

Which Act Did You See the Most?

I couldn't get enough of Blackillac. The new project pairing South Austin-raised rappers Zeale and Phranchyze upstaged Dr. Octagon at Empire, fired up a big crowd at the Chronicle's Hair of the 3-Legged Dog day party, and tore the lid off a session at Arlyn Studios. The duo's chemistry proved off the charts. Their lyrics are both raw and clever, and every hook is an anthem. "Someone strip him of his badge. He cannot secure the bag!"

Who Was the Music Keynote?

Not a superstar speaker comparable to Springsteen, Grohl, and Snoop in recent years, but top-billed keynote Lyor Cohen, who helmed Def Jam in its heyday and currently heads music at YouTube/Google, proved a hot ticket nonetheless. Eager minds filled his conference hall plus an overflow room for a speech that alternated between motivational speaker ("I love change, I thrive on it"), optimistic industry guru ("We're entering a golden era of the music business"), and hip-hop historian, effectively punctuated with song snippets from DJ D-Nice. One musing regarding his Def days that still rings true: "We knew how important it was for young black America to tell their own stories in their own ways." Alas, his self-portrayal as a tireless artist advocate doesn't jibe with YouTube's paltry royalty payments to musicians.

No, but more Clan members were at SXSW than often show up for an actual concert. RZA led a live band at the Belmont, U-God promoted his Raw autobiography with a candid public interview, Raekwon materialized at Fader Fort, and Ghostface Killah performed at Empire. When the latter requested a stand-in for Method Man's verse, beatboxer Ben Buck (son of veteran Austin drummer Mike Buck) jumped onstage and killed it so hard that Ghost lovingly embraced him.

What About the Roots?

They didn't play either and you can blame 26-year-old Austinite Trevor Ingram, who was arrested for emailing a bomb threat to promoters Live Nation on Saturday afternoon targeting that night's annual Roots & Friends Jam at Fair Market. Event sponsor Bud Light, a sponsor of last fall's Route 91 Harvest Festival in Las Vegas where a sniper killed 58 people, made the decision to cancel.

Who Was Truly Original?

Israeli guitarist Yonatan Gat, formerly of Monotonix, was joined by Native American drummers/vocalists Eastern Medicine Singers and experimental ATX shaman Thor Harris at the Chronicle day party. They set up in the dirt encircled by an enthusiastic audience as they launched into a tribal mind-blow on Link Wray's "Rumble." Meanwhile, I was skeptical of Superorganism because their color-coded raincoats made them look like an art school version of the Power Rangers, but the global coterie's sample pop came off extraordinary. Lastly, I didn't even know South Bronx cult legends ESG were playing SXSW until I strolled into their Volcom Garden set and was stunned at how fresh their post-punk funk remained 40 years after creation.

Who's the Next Big Thing?

What Gave You FOMO?

Regrets, I've had a few: letting my ambivalence toward Westworld keep me from taking in local synth-n-gong explorers Dallas Acid at a ghost town, missing Zimbabwean Tonga fusionists Mokoomba, not being one of the 49 lucky ones to witness Margo Price play in the chapel at Luck Ranch, being absent as Low reimagined slowcore on St. David's church organ, and getting left behind on Afro-fiddler Sudan Archives. 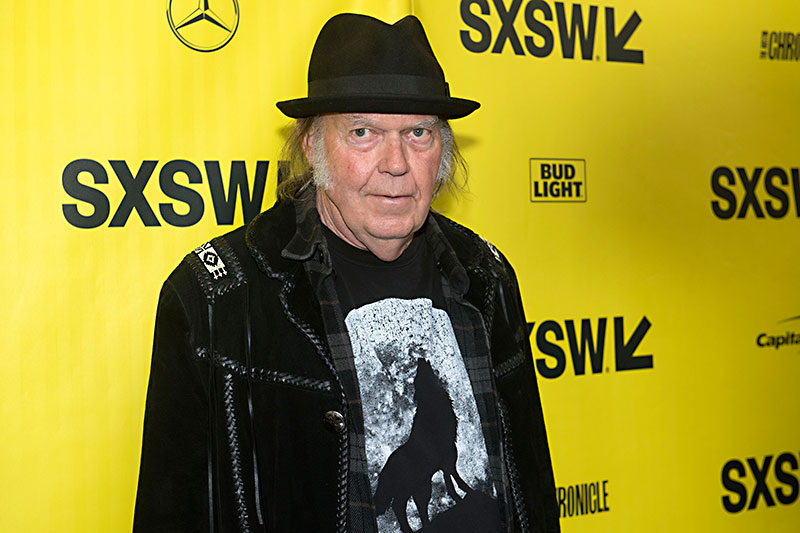 Did Neil Young Even Bring His Guitar?

Young was in town for the premiere of the Daryl Hannah-directed Western flick Paradox, which he acts in alongside sibling scions Lukas and Micah Nelson. Slated as the surprise performer at an intimate Farm Aid benefit on Wednesday at Willie Nelson's Luck Ranch, he bailed. Still, rumors persisted he'd show up at the following night's Luck Reunion party or join Tony Joe White at Sam's Town Point, but alas his only notable extracurricular activity was attending a party at SXSW founder Louis Black and partner Sandy Boone's home.

What About the King of Comedy?

You mean Bill Murray? He was also at SXSW for movie interests (The Bill Murray Stories, Isle of Dogs), but made time to dance to Austin's Silo Road at the White Horse on Sunday. The following night, while performing at the Long Center with cellist Jan Vogler, he paid tribute to the teenage musician killed in a package bombing last week: "We'd like to sing this song to the soul of Draylen Mason, double bass player," he said before performing Scottish standard "Loch Lomond."