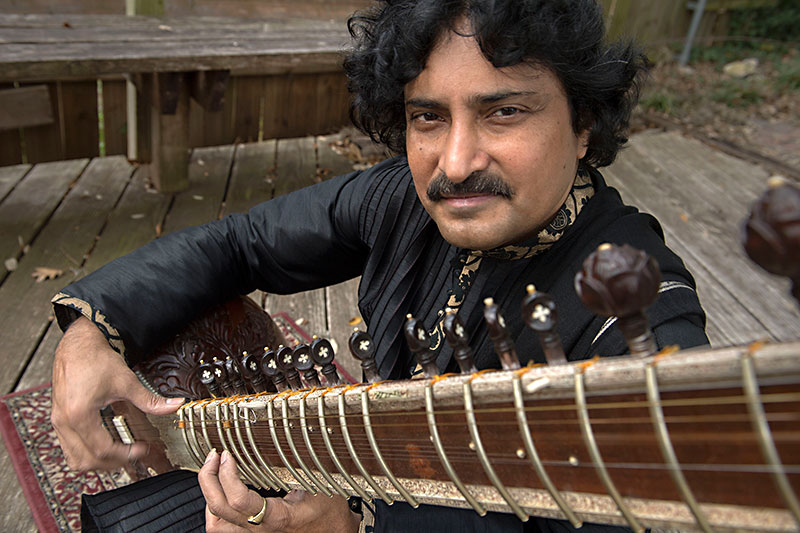 SXSW 2017: An international gathering of nerds waits impatiently for Austin synth wizards Survive, cresting on the popularity of Netflix hit Stranger Things. Taming their restless anticipation are a buzzing drone, thrumming tabla, undulating tonalities, and the mesmerizing improvisations of local sitar maestro Indrajit Banerjee. Such is the power of raga, the dominant form of Indian classical music, which dispels the outside world by drawing all into a deeper understanding.

"This music that we do, it's more of an inward nature," explains the Kolkata-born bandleader. "It's really hard to explain, because it's a different tradition and concept. When things are simple, like when I play only three notes, intellectually nothing much is going on. But there could be much going on.

"How we connect with and how much we bring out of those notes, how much feeling I put to it, is unique. It's like 12-bar blues. You play music with a few notes, but you capture that soul."

"I wanted to come here because it's a great city where you meet all kinds of musicians from all around the world," he says about moving to Austin 10 years ago. "In my city, you don't have people visiting and playing that often."

Such is the power of raga, the dominant form of Indian classical music, which dispels the outside world by drawing all into a deeper understanding.

The exposure changed the context in which his music can fit. Besides collaborating with homegrown world beat fusioneers Atash, which also showcases at SXSW this year, and Pakistani-American guitarist Fareed Haque, Banerjee has albums in the works with Dave Matthews' saxophonist Jeff Coffin, flutist Sarah Jane Hargis, and Sitarji, a collaboration with Austin conceptualist Laura Scarborough.

"I never played any experimental fusion when I was in India, but when I came here, I blend in with this culture and then I have one foot on this side, one foot on that side," he says. "I didn't stop or get scared that I shouldn't do something new."

"I try to be traditional and I try to learn from both the worlds now. How you feel about the raga music I try to convey to you is simple but profound."