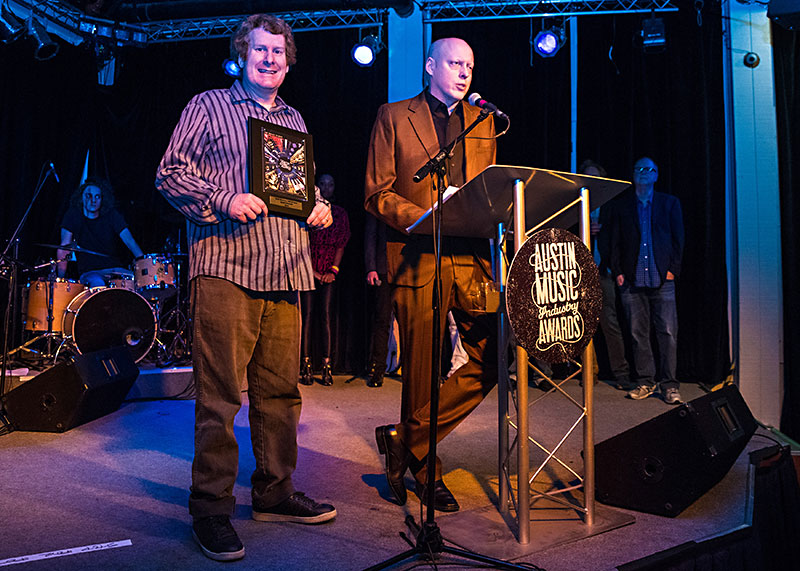 The following is my acceptance speech for an award I didn't win:

"Wow, look at this, so much of Austin's music industry is here tonight. If a bomb went off right now, our scene would come to a complete standstill ... and nobody in Los Angeles, New York, or Nashville would even notice [pause for laughter]. I should say I'm honored to be winning a fourth consecutive Best Music Writer plaque, but let's face it, awards are bullshit. We're just patting ourselves on the back with imaginary achievements in a field that's subjective by nature. Are we really this insecure?"

I didn't win Best Music Writer at the Austin Music Industry Awards, held last Sunday at the Palm Door on Sixth; Michael Corcoran did. It was long overdue for the Pete Rose of Austin music scribes – the best never honored. A testament to his transcendent talent, after decades penning columns in the Chronicle, Statesman, and Dallas Morning News, "Corky" got the most votes at a time when Facebook remains his foremost publication.

Yours truly and Riverboat Gamblers/Drakulas frontman Mike Wiebe served as the night's attention whores – I mean "co-hosts." The house band, led by Magic Rockers of Texas singer/guitarist Jim Campo and PR Newman frontman Spencer Garland, again stole the show in the AMIAs' fourth year of spinning off the business side of the Austin Music Awards, which occurred on Wednesday after this issue went to press (see review online and here in print next week). They greeted each guest with personalized walk-up music, like altering Bow Wow Wow's "I Want Candy" into "I Want Andy" for media brand Andy Langer, who claimed the group was the "only reason" he attended.

Given that the sentiment of any awards show is forged by the winners, this year's acceptance speeches were especially heartfelt. Veteran poster artist Billy Perkins painted a harrowing picture of all his mother went through to raise him, then described her joy when he told her he'd won. Antone's co-owner Will Bridges commemorated the blues joint's Best Music Venue to Play honors in revealing late club founder Clifford Antone's original vision: Make a place musicians want to play and the rest will follow. Sun Radio's A Hill Country Saturday host Kevin Connor collected his Best Radio Music Program plaque with a simple formula: "Play a good song, then think of another song that will sound good after it." Croy & the Boys singer Corey Baum lampooned gender stereotypes by effusively lauding AMA director and all-around renaissance lady Celeste Quesada, then stated, "Behind every great woman, there's a great man" and presented the Best Producer award to her husband Adrian Quesada.

The podium was also ground for declarations. Tommy Robertson, owner of Best Specialty Instrument Store Tommy's Drum Shop, gave us a strong affirmation: "This is a community!" Soon thereafter, Rick Pierik, operator of Best Local Label honoree Nine Mile, made a plea for Austin's music community to be greater by collaborating more. Indeed, because rare is the occasion that so much of the industry has an opportunity to get together as they did at the AMIAs. No wonder the guest list has grown a mile long.

It's amazing how the event has developed. Debuted in 2015 to shorten the AMAs, the invite-only industry gathering has become a truly significant event in Austin music. It's like your redheaded stepchild turned out as cool as your kids. New this year was a nomination round in the Austin Music Poll that resulted in triple the amount of total votes and younger demographics.

Still, one of the most important categories at the AMIAs has become the Music Industry Hall of Fame, which recognizes epic careers of behind-the-scenes visionaries. This year, a groundswell of support erupted behind Craig Stewart, the man behind highly influential Nineties labels Trance Syndicate and Emperor Jones before becoming an integral piece of the SXSW Music team.

"The acts [on Emperor Jones] owned their master recordings and were free to sign other deals. That's the level of respect Craig has with his artists," offered SXSW Director Roland Swenson in his heartfelt introduction, adding that Stewart's reputation and relationships were instrumental in SXSW establishing its indie credentials.

Stewart isn't a household name, but anyone who knows him or what he's done bends the knee. People like him are the reason the Industry Hall of Fame exists. Organizers didn't expect him to show up – he's been rendered unable to speak by a neurological disorder – but when Swenson called his name, he walked onstage with his husband, Butthole Surfers drummer King Coffey. Everyone suddenly shut up and listened.

With Stewart by his side, Coffey explained that his mate loved music more than anybody and how he dedicated his life to championing obscure bands. As Coffey spoke, Stewart smiled broadly and gestured in a way that screamed, "Yes! He's saying what I want to say." I wasn't the only one wiping away tears.

That's when I realized that awards aren't bullshit. They're a sign of respect, a show of love. And sometimes, they go to people who really deserve them and make them genuinely happy.

The Old Settler's Music Festival previewed its new grounds last Sunday. It took "Playback" 50 minutes to drive from Austin to the 145-acre plot of farmland in Tilmon just southeast of Lockhart. Despite scattered showers, hundreds showed up to see Kevin Russell of newly branded Band of the Year Shinyribs christen the land, which has been worked on for months by the roots music fest's ultra-loyal volunteers. The layout for April 19-22 features two main stages, a campground bandstand, plus the Camp Goodtimes stage. The OSMF-owned site's more than double the size of their previous home in Driftwood, but the real game-changer is four large camping lots, which means festers won't have to scramble for a spot to pitch their tent or RV.