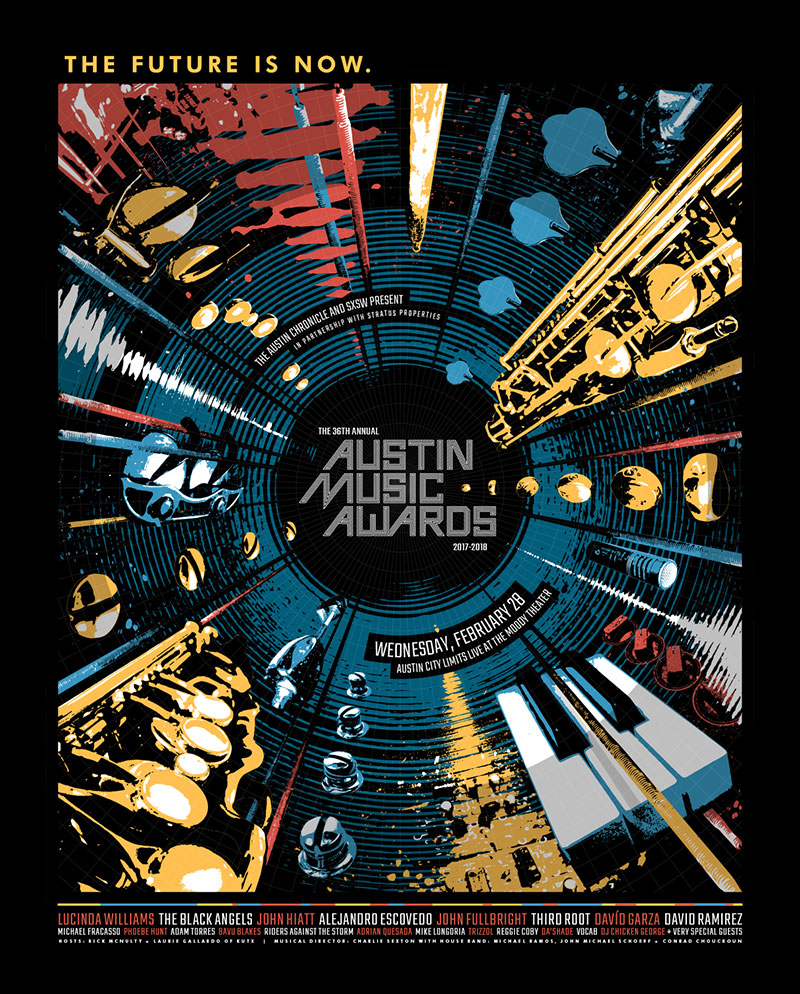 Agenda item No. 1 for the 2017/2018 Austin Music Awards Show hinged on a landmark first for the 36-year-old local music prom. Not the implementation of two distinct rounds of AMA balloting, which produced the most diverse class of winners ever. Nor even separating the show from the conference staged by its co-producer South by Southwest for the first time in the history of the two entities' coexistence.

No, the inaugural decision executed for this year's celebration of local music pivoted on homegrown hip-hop. Past years peppered in appearances from top-tier native MCs, but a full set celebrating Austin rap, though conceived over the past three years, suddenly came due. Perfectly synchronous to this "it" moment proved the KUTX playlist.

Enter a tribe called Third Root, who dropped knowledge on last year's third LP, Libertad (see "Trill Pedagogy," Feb. 2). The dynamic trio of DJ Chicken George, Easy Lee, and MexStep teamed with überproducer Adrian Quesada to deliver an enlightened treatise that's as much a "Reflection of the Times" as a barrage of "Bullets for the Truth." High rotation "Kawhi" got the feelin', all right.

The inaugural decision executed for this year’s celebration of local music pivoted on homegrown hip-hop.

Cutting cultures and bending borders in a fusion of Latin rhythms and jazz funk, Third Root flows an urgent vision of the woke revolution. Bavu Blakes, Riders Against the Storm, Vocab, Reggie Coby, Da'Shade Moonbeam, and Trizzol (featured on "Kawhi") all assume their place at the AMA mic, drawing the line from the capital city's underrated hip-hop legacy to the rising force of its future. Consider it both a culmination and inauguration, because every initiation is written with a prelude.

Jimmy LaFave understood preludes. No one stripped more emotion from a familiar song, revealing new nuances in the words of his songwriting heroes, while becoming one in his own right. His final bow last May at the Paramount Theatre sets level to Austin legend (see "Jimmy LaFave in the Present Tense," May 12, 2017). Oklahoma song agronomist and honorary local John Fullbright makes for something of a musical mirror image to Okie-braised Texan LaFave, and when teamed with local heartbreak balladeer Michael Fracasso in a tribute to the late Guthrie/Dylan acolyte, AMA attendees best pack a hankie.

LaFave's 1994 breakout Highway Trance rings a timeless call, an echo answered by the troubadours consummating the "Borderless Love" showcase. Nicknamed for a Flatlanders song, the show segment aligns Phoebe Hunt, David Ramirez, and Adam Torres, all of whom couldn't be more different as songwriters. What unites them, sustains them, is an endless search to find beauty in the farthest reaches of the world, the soul, memory.

Ramirez's road-worn Fables found breakout fulfillment with last year's We're Not Going Anywhere ("Texas Platters," Oct. 27, 2017), an empathetic exploration of the distances between cultures, technologies, relationships, and history. His remarkable songs give no answers, but they graph a new atlas amid his cartography of doubt ("Playback," Sept. 8, 2017).

Lord of the Highway and AMA Hall of Famer Joe Ely made a bonfire of his road maps, a spark famously lit when he picked up a record-packing hitchhiker named Townes Van Zandt. Only appropriate, then, that Ely follows fellow West Texas iconoclast Terry Allen in receiving the second Townes Van Zandt songwriting award, celebrating a half-century of carving his own distinct brand of Texas-twanged rock & roll. Songwriting mavericks John Hiatt and Alejandro Escovedo fete the Panhandle Rambler.

Hotelier Liz Lambert also gets honored, receiving the Margaret Moser Award. Like the Patron Saint of the Austin Music Awards, who passed away last year, Lambert fearlessly defies convention and creates her own scene wherever she goes. From the Marfa oasis El Cosmico to Austin rockstar haven St. Cecilia, Lambert reps the Texas state capital through music patronage, culture, and comfort.

Laws of physics demand that honoring a force as powerful as Lambert requires an equally powerful force in return. Lucinda Williams fits the bill, making her fifth mark on the Austin Music Awards. Long past are the days of Williams busking on the Drag, yet the Americana pioneer never shies from hard realities and emotion, her gritty and direct songwriting cutting to the essence of where the spirit meets the bone (see "Moon-Shaped Panties & the Saint of White Trash," Oct. 23, 1998).

Davíd Garza lends his indelible, eclectic rhythms to the dance as well (see "This Euphoria," Jan. 23, 2009), setting the stage for this year's special guest. Last year's AMA show tilted into a blistering set from Chrissie Hynde, and this year ups the ante even more with an artist that could sell out the Moody Theater on their own.

Closing the show belongs to the Black Angels, who a decade ago dropped a bomb in a red barn off Burnet Road with their inaugural Austin Psych Fest ("I See Dead People," May 9, 2008). Now their Levitation fest is a global brand and has re-centered River City here as ground zero for psych. Last year's fifth LP from the septet, Death Song, hypnotized behind throbbing rhythms and scared riffs.

The Austin Music Awards always sought, first and foremost, to document the local scene, connecting the city's musical legacy through all its eras. For its 36th year, the show returns to its premier, singular status – putting Austin music F I R S T.

The 2017/2018 Austin Music Awards return to ACL Live at the Moody Theater for a second year on Wednesday, Feb. 28, 7:55pm sharp. Tickets: austinchronicle.com/austin-music-awards/show.