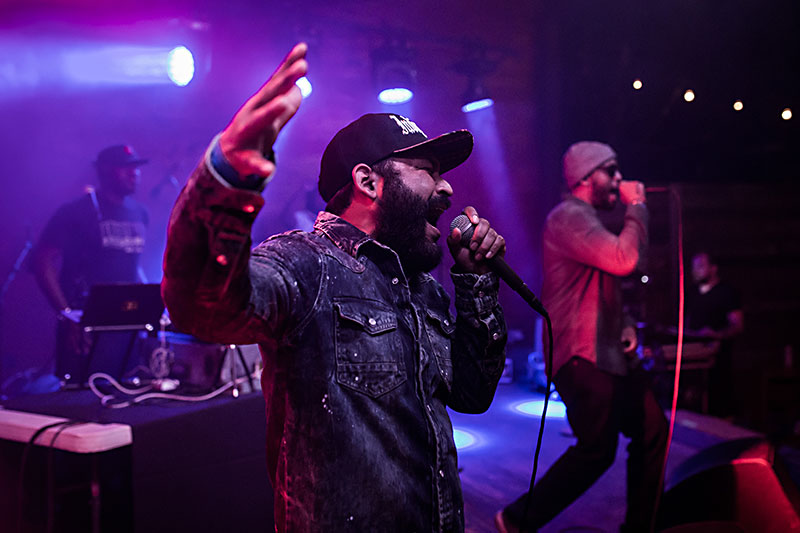 "We have a responsibility, first and foremost as people of color, to talk about things affecting us directly and our community," explains DJ Chicken George (DJCG). "It's real, it's honest, and for some people, it's either-or. Either people like it, or they don't. And we're not making music to appease anyone.

"We're here to speak the truth."

The sheer act of educating, both in the classroom and within hip-hop, are analogous to participatory democracy and social justice at its highest order.

The truth DJCG speaks of can be found on Third Root's third and latest album, 2017's Libertad, a study in dissonant flows, unabashed consciousness, and jazz-funk revivalism from distinguished producer Adrian Quesada. The rappers, along with a host of like-minded conspirators, breathe holy fire into Quesada's bottom-heavy live kinetics. Increasingly rare is any such project where the MCs don't sound like they're only listening to rap music.

Known for his work (and sometimes membership) with Grupo Fantasma, Brow­nout, Echocentrics, and Ocote Soul Sounds, Quesada goes way back with Austin hip-hop, working with Bavu Blakes on seminal 2002 locality Create & Hustle. The Laredo native and guitarist was tabbed by Third Root to track one song at his local studio Level One Sound, the energetic "Soul Force," initially conceptualized as a 7-inch featuring Da'Shade Moonbeam, Rid­ers Against the Storm, Vocab, and Blakes. Composed by an unnamed Euro­pe­an producer, the tune boasted "great" base production, recalls the session engineer.

He says the first few tracks were completed similarly. Utilize the original track as a demo for vocal and cadence tracking, then create new music retrofitting the lyrics. What emerged played bigger than the parts.

"I think what you hear on Libertad is MCs who became brothers," asserts Peters, "just from all of the shows we do, sleeping at each other's houses, all of the studio time, the conference calls. You become family.

"When I go back and listen to our first project," he continues, "we did some good work, but I feel like I was still in my world and MexStep was in his world. Now, when I'm writing, I can hear his voice. When he's writing, he can hear my voice."

Moreover, Libertad represents cohesion of message, and there are many. Aside from its immediate and evident themes of sociopolitical resistance, racism, and xenophobia, Peters coins a curious phrase found in the LP's lead track, the booming "Third Root Radio."

As educators of color, Peters and Cervan­tes view scholarship – and rap music, as a medium – as intrinsically political. They reject informational neutrality with the insistence that the sheer act of educating, both in the classroom and within hip-hop, are analogous to participatory democracy and social justice at its highest order. In this sense and essential to understanding where the group exists creatively, Third Root exists more as author and curator of a book than merely an act doing a straightforward rap album.

One of the album's grandest features is the manifestation of "trill pedagogy" through the mouths of guests. Extraordinary in and of themselves, the trio are generous in providing space for other voices. Bavu Blakes, himself an educator, harks back to a prime Gil Scott-Heron via the progressive polemics of "The Revolution Won't Go Viral."

The sharpest, most succinct words on Libertad belong to two brilliant women, poet Amalia Ortiz and activist Queen YoNasDa Hill, who rap over Quesada's Afrobeat scatter on prophetic track "Bullets for the Truth." In a recorded radio spot, YoNasDa relays her studies in sociopolitical movements into an ability to better locate the enemy next to her, displaying worn-in courage by proclaiming she "can't be bought, and I cannot be sold." Third Root would like their message to become a pathway for further unification of groups that haven't always appreciated each other's positions.

"If we can appreciate each other, then we can push forward and push the conversation forward, and that's what Third Root's real litmus test is gonna be," says Peters. "Are [people] gonna be able to look back and say, 'Man, Third Root's music made the Black and Mexican community appreciate each other's cultures and contributions a little bit more'?

"If that happens, that's better than any Grammy."

A version of this article appeared in print on February 2, 2018 with the headline: Trill Pedagogy