Why was this the first given your growing up in a musical mecca such as Los Angeles? I was fanatic for Jethro Tull and Ian Anderson. I loved the depth of the lyrics, the musicianship, and the general eccentricity of Ian and the band. I remember even doing an India ink drawing of the Stand Up album cover. I played in a band that covered Jethro Tull, Traffic, Led Zeppelin, and the like, so the tickets were a birthday present from my folks, who knew I loved the band. I had turned 14 three days before the concert. It was the Thick as a Brick tour.

How was it? The concert blew me away. The flute solos, extended drum solos, and general virtuosity of all of the musicians was inspiring. The way Ian Anderson completely lost himself in character was so impactful. The concert seemed like such a happening. It was very powerful, being part of about 20,000 fans getting high on music and otherwise.

What role, if any, did this show play in your becoming a musician? Myself and the musicians I played with wanted to be able to play like Ian Anderson, Jimmy Page, and Rebop Kwaku Baah (Traffic's percussionist). Me being a hand drummer/percussionist, we then started to strive for the virtuosity of jazz musicians like Herbie Hancock, Pat Metheny, and those in the bands Return to Forever and Weather Report. So it impacted me as a musician and a presenter. It blows my mind that I now know many of my musical heroes by presenting them at One World Theatre, even doing a Super Trio – Chick Corea/Steve Gadd/Christian McBride – Live at One World Theatre recording. 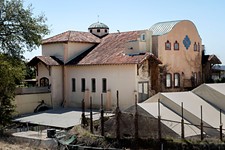