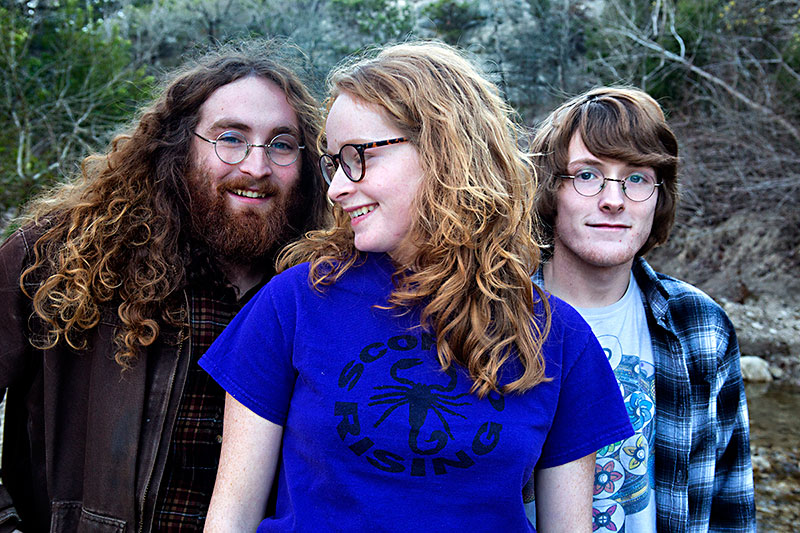 "Me and my brother moved from this little redneck town [Sweetwater] and went off-course," recalls Brandon Boley, 47-year-old patriarch of a highly musical clan ensconced on a vast ranch near Florence, 40 miles north of Austin in Williamson County. "I bought this $10 Kent guitar and fiddled with that thing, but I couldn't play it for crap. It disappeared from my room and three weeks later, my brother's playing [Randy Rhoads'] 'Mr. Crowley' solo on it!"

An afternoon fire burns inside a stone-and-mortar pit to counter arctic winds whipping from the north across a rustic spread that's been in the family of Brandon's wife Shannon since her great-great-grandfather settled here from Ireland in 1883. Originally 500 acres, the portion where he and Shannon raised cows, bees, and children Ethan, Emma, and Jovian now tallies closer to 170.

"Somehow," he nods toward Emma, 19, and the newly 18 Jovian seated close by, "all three of them are blessed with the same musical genetics, where they're able to just pick it up and go."

This ability resulted in the Boleys, an acid-punk variant on Sixties family act the Cowsills (or the TV version, The Partridge Family), whose eponymous full-length bow was reported to the Texas Music Office as Antone's Records' 12th highest-selling release by a Lone Star act for 2017, one notch above Gary Clark Jr.'s Live.

"When we were young, we saw a video of my uncle playing with his friends in their band," says Emma, gifted a first drum kit by her godmother. "Then, when we were in band in high school and middle school, our older cousin Austin started giving us System of a Down CDs and told us, 'Yeah, their guitarist is cool.' So him, my dad, and our uncle all influenced us to want to do that as a career."

"Ethan started playing guitar at 10," recalls Jovian. "He then taught me the basics for bass. I was in fifth grade, when you can start in school band. I played bass in [jazz] band and learned 'Jingle Bells' and shit like that. Emma started playing drums later on, in 2012. We started very slowly writing stuff."

The scholastic jazz band background all three Boleys share explains how the LP's seven songs, bearing titles on the order of "White Tobacco" and "She Won't Get High," veer from Sabbath-weight fuzz and psychedelia to lengthy bouts of jazzy swing and rampaging punk. Often in the same track.

"I sang and played guitar in really shitty bands in high school," recalls 22-year-old Ethan, who bears a striking resemblance to 1968 vintage John Lennon. "Then I went to South by Southwest in 2014 with our friend Marcus, and after that, I said [to my brother and sister], 'Dude, let's just be a band. We have all the necessary parts. We can do it!'

"We emailed Mike Boudreau at Red Eyed Fly, who gave us our first gig. We were like, 'Holy shit, we're going to Austin!'"

"They took us in," says Ethan of Austin's punk scene. "They let us do whatever the fuck we wanted. We weren't like a traditional punk rock band, but they totally let us fucking do it. Which is the beauty of punk rock."

"Nobody asked them to be any different than what they were," affirms mom Shannon, who assumed the Bud Cowsill/Reuben Kincaid managerial role for the trio. "They were able to be exactly what they wanted to be."

What they want to be is more akin to Ty Segall and Butthole Surfers than UK Subs. Still, Ethan promises a sophomore Boleys LP later this year, cut in their barn as was the debut.

"There was a point last year where we were slowing down and thought maybe it was over," recalls Jovian. "Then we took a little break, and when we came back, new songs were flying out of nowhere."

The Boleys appear in Pflugerville at Hanover’s Draught Haus on Saturday, Jan. 20.

A version of this article appeared in print on January 19, 2018 with the headline: Scholastic Punk