Reining in the freak show while doubling down on the absurd 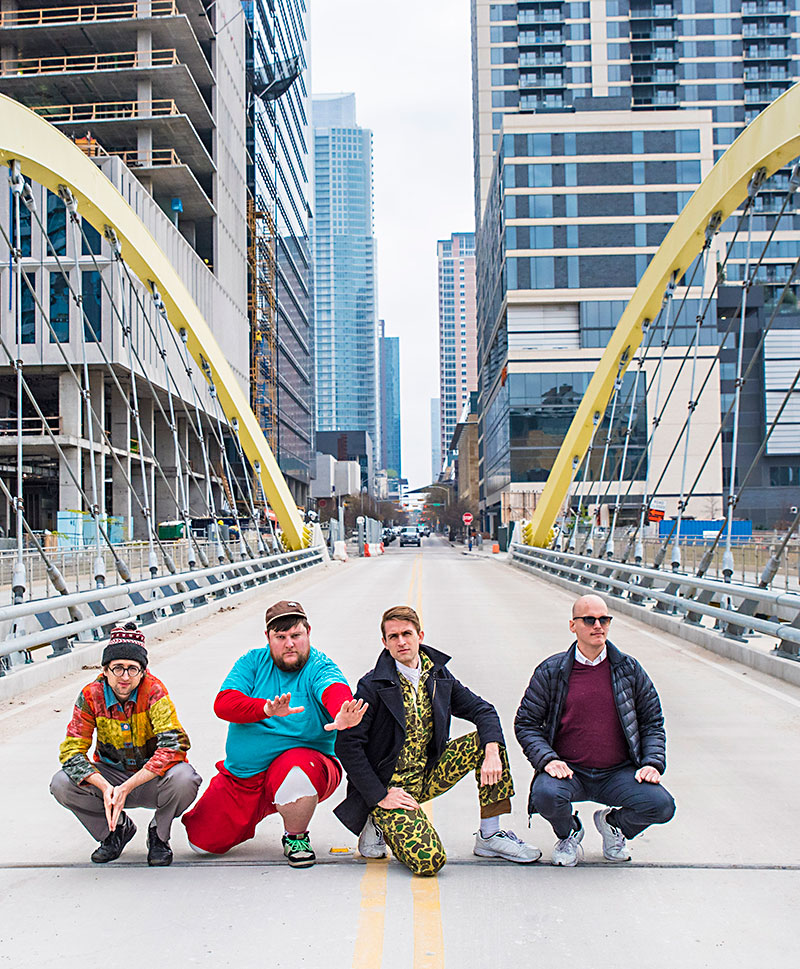 Eric Braden's last show with his first band ended in a gush of blood and affirmation.

In 2010, years before he began freak-punk project Big Bill, the recent college graduate still lived in Lubbock and, despite a glaring lack of musical experience, somehow convinced a guitarist named Fiddles to start a band with him. Their final performance included the group's bassist accidentally whacking Braden in the head, which left him with a gushing wound for the remainder of the set. Afterward, a friend told him, "You were made to be a frontman."

When the singer recounts the story, laughing, it's at the prompting of his brother and Big Bill bandmate, Cody Braden.

"It definitely helped get me over my inferiority complex, because I didn't play guitar. Or know how to sing," affirms Eric.

"He did for you what you did for me, growing up," deadpans Cody.

Even if the younger Braden sounds facetious, Big Bill's guitarist credits his brother's drive and obsession with music for his own artistic development. From cutting demos in high school to his fast ascending local fourpiece, Eric's unwavering dedication has proved a tenacious presence – both in the focal point's unhinged, gripping live theatre and the band's momentum.

Across five years and roughly 200 shows, Big Bill has grown into a local phenomenon, a cacophony of feverish, chaotic punk and absurdist humor.

"Eric always believed in Big Bill," explains Cody. "He's the force that's kept it together. And that means a lot."

The band came together in 2012, after the native Katy siblings moved to Austin on a whim and backed into an alienated existence at a remote apartment complex in South Austin. After connecting with Eric's high school friend and bassist David Fitzhugh, the trio decided to rock and did so by churning out ridiculous, humorous, Big Bill madness.

Illness forced Fitzhugh out, replaced by Jennifer Monsees before multi-instrumentalist Alex Riegelman became permanent. The original drummer didn't work out, either, but a friend connected them with Alan Lauer early on. Lauer had seen Big Bill perform, and Cody recalls Lauer's first impression of the group: "They couldn't sing, but there was something about it I liked."

The latter part is the consensus in Austin.

Across five years and roughly 200 shows, Big Bill has grown into a local phenomenon, a cacophony of feverish, chaotic punk and absurdist humor. Songs include "What Do You Want on Your Salad?" and "Every City Sucks," and they're all punctured by Eric's grating vocals. It's unexpected, subverted, and yields an immersive, surrealist escape.

That raw live energy often finds the singer hanging from ceiling beams or careening into the crowd, seemingly removed from his body and inhabiting the far-out mind of whichever freak is narrating the song. This typically draws a crowd. A June residency at the Electric Church last year crammed the sweltering Eastside DIY space every Friday night, while Bill's December record release show at Hotel Vegas became uncomfortably packed.

Often, audiences skew younger, kids driving in from San Marcos to see the band. Both speak to Big Bill's ability to conjure up a community. That first taste of genuine weirdness beckons to a teen and the collegiate demographic, a door-opening magic offered by the group's unabashed embrace of the inane.

"With Big Bill, the call is, 'Feel free to do whatever you want,'" says Lauer. "'Be yourself. Be the most extreme version of yourself right now.' If you wanna sit, or lie down on the ground, or if you wanna jump on us, we don't discourage that. We create an environment where that's available to people."

"There's something in how Eric interacts with the audience that feels pretty inclusive or communal," adds Riegelman.

In the beginning, there were outlandish outfits, a cartoonish unibrow slapped across Eric's face, but that's faded away. Even with the overt visuals mostly laid to rest, the odd bird labels remain. The frontman visibly cringes at the word "zany," acknowledging that the band embraced the label, but he bristles at Big Bill being relegated to mere novelty.

"Big Bill is self-critical, intuitively," says Cody. "I feel like we're perfectionists and we try to make every detail right, versus bands who just wanna have a good time and are agreeable in their songwriting process because they don't wanna hurt each other's feelings."

"We go at each other and yell at practice pretty regularly."

Last year, Big Bill fixated on the idea of releasing a full-length. It seemed like the next step for a legitimate band. Stand by Your Bill thus dropped in November, accompanied by intricate, cartoonish album art, the visuals by Brian Blomerth so striking that the band felt it had to live up to them.

The bow doesn't totally capture the mania of the quartet's live show, but it's a sonically diverse sprawl that's starkly, and singularly, Big Bill. The LP flies by at a breakneck pace, angular, jarring, and adrenaline-fueled. Eric's nasally, alien vocals fuse together a gleeful absurdity. In parts, it's sinister, in others gentle. Sometimes a chugging, cheesy guitar line crashes into a pure pop hook ("Clint Eastwood Is My Dad").

As the core songwriters, the Bradens avoid punk band tropes. Any statement songs are subverted, their politics buried beneath hooks and a good dose of humor, which the brothers agree is compositionally central. Mostly, they're focused on the overarching experience.

"I want it to be unsettling," offers Eric. "It's an element of attack almost, an attack on what you expect or what you feel comfortable in. I do embrace the negativity. It's almost more to feed off of when [the audience] isn't sure."

"Winning people over is a lot more satisfying than when everybody's on board from the very start," adds Cody.

"I just like that feeling of, 'This is a weird vibe, I'm not used to feeling this way, I don't know what to feel,'" finishes Eric Braden.

A version of this article appeared in print on January 12, 2018 with the headline: Your Extreme Self