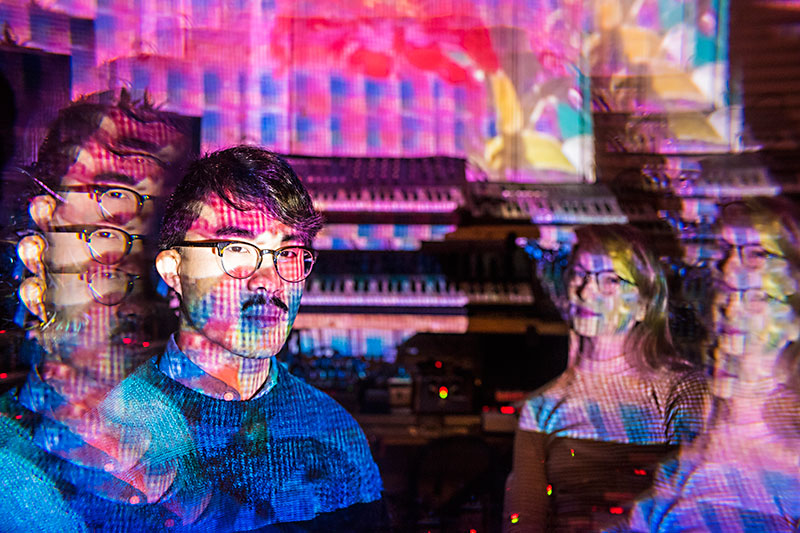 During the day, Peter Tran works the counter at electronics music store Switched On, helping customers build their synthesizer collections. At night, he supplies inspiration to that same demographic via his solo project Curved Light.

"I don't like being defined as ambient anymore," admits Tran. "A lot of my tapes have been one song mixed into the next, like a mixtape, but the new record isn't so much long-form pieces as songs with percussive elements."

Look for a full-length vinyl record later this year, but until now Curved Light's six releases, including May’s Channelview on local imprint Holodeck and October's Constellation Tatsu release Quartzsite, have been available only on cassette. The format's affordability allowed him to put out 2015 debut Mineral Wash/Indigo Rinse for under $300, and a dedicated community has nearly sold out all his tapes. Still, digitization has resulted in "Aurora," a track off his latest offering, racking up 1.3 million plays after prominent placement on a Spotify playlist.

"I kind of want to stop doing tapes moving forward," admits Tran. "Tapeheads are cool, but you reach a wider audience with a record. And I feel like a lot of publications don't even care about tapes."

Fittingly enough for a Walkman-inspired medium, Curved Light sounds great on headphones, yet the live visuals are as much of a draw. His partner Deirdre Smith, a 29-year-old doctoral candidate in art history at UT, uses video synthesizers and recordings from everyday life to create a pastiche of projections. They're abstract, with organic touches like water footage or images of human hands.

"I think about surrealism a lot," says Smith. "I try to present an image from the real world in a way where the technology makes it become unfamiliar or strange."

The accompanying visuals change every few months, as does Tran's gear. For a music geek, a gig at Switched On is like putting a 10-year-old in charge of Toy Joy. It's fun to lust after the store's wall of boutique instruments, but one of the most common pitfalls of electronic musicians is fetishizing the gear over the output, resulting in hodgepodge improv sets that sound less like symphonies and more like "fart noises." Tran employs an unofficial rule to keep his addiction in check: Wait a month before making any purchases.

In addition to allowing him to upgrade his arsenal at a discount and enjoy flexibility with touring, the Switched On gig also offers an education. Newcomer to Austin, Tran says the staff and clientele serve as a valuable entry point to the city's rich electronic music history.

"It makes you realize how deep the synth scene in Austin goes," he enthuses. "Meeting guys like Chad Allen, John French, the guys in Pataphysics, they're super OG. It's crazy. I had no idea."