Who: Power Station, Orchestral Manoeuvres in the Dark

How was the show? It was an amazing experience. My mom dropped my friend and me off at the gates. We felt so grown up. We were finally 13 years old (teenagers!) and seeing John Taylor from Duran Duran in the flesh; pretty sure we both planned on marrying him. What's funny is that after all these years, I remember the OMD set more than the Power Station. I also recall I wore all black with lots of eyeliner, and bought my first-ever concert poster. Definitely going to see OMD when they hit Emo's in April.

What did you take away from it as you began a life of live music-going? I was hooked, especially being part of an audience of diverse people from all walks of life with something in common: music. The sense of community was palpable. I saw lots of concerts at this venue. I had a season pass to AstroWorld after all!

Why a life of live music-going, anyway? This show was the beginning of a lifelong love of seeing live music that has only gotten stronger over the years. Seeing a show with an audience is the great equalizer and a perfect reminder of how the power of song brings people together. I have been to countless shows all over this planet, but the reactions are pretty much the same – namely joy. 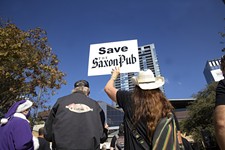