What does it say about Austin's Pocket Fishrmen that the best LP of their 30-year career defies standard logic? You can't really call The Greatest Story Ever Told either an anthology or a greatest hits package, because it consists of new recordings from the acid-punk oddballs' catalog. Nevertheless, spread across a 14-song vinyl LP and 16-song CD, these are definitive performances/recordings and the most cohesive statement the group ever cut.

What's the difference here? Perhaps the band's most solid, accomplished, and longest–running lineup: founding members Brant Bingamon on all manner of wailing, and slumming arena rock guitar hero Cris Burns, with rhythmic slam by bassist Jason Craig and drummer Lance Farley. There's 120 cumulative years of experience between these locals, and don't discount Burns developing into one of Austin's best producers/recording engineers well past the release of first single "Amy Carter" in 1988. Greatest Story bears all the clarity and roar that hallmark Burns' best productions.

Pocket Fishrmen Serve up Punk and ... Fish
What to expect at the punk cutups' annual Fish Fry 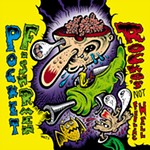