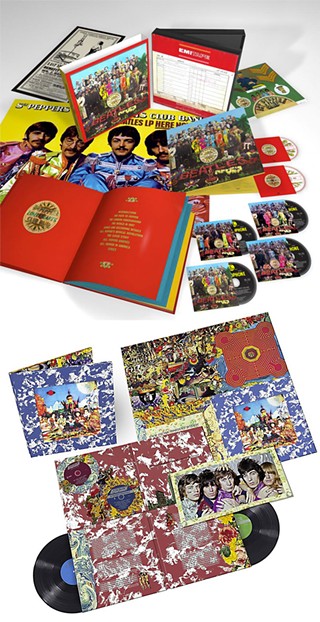 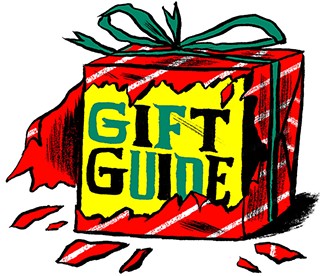 
Since all matter corresponds to equal amounts of antimatter, the mother of all modern art-rock LPs famously birthed a bastardized inversion. Their deluxe reissues now meet at an unexpected middle ground.

Anyone under baby boomer dotage generally cites "The White Album" as their essential Beatles disc for its roots sprawl and snarl. A year earlier in May 1967, Sgt. Pepper's Lonely Hearts Club Band, which famously took cues from the Beach Boys' Pet Sounds in 1966, wrote the proverbial bible on rock & roll's conceptual covenant – the whole of an album, not just songs – yet 50 years on still doesn't obscure its frivolity. Paul McCartney dominates vocally and compositionally, and a mind-bending stereo remaster redefines the psychedelic summit while making the mono mix on disc 4 superfluous, but a pair of demo discs single out John Lennon's backbone contributions in multiple takes of pre-LP single "Strawberry Fields," plus "Lucy in the Sky With Diamonds" and "A Day in the Life."

In that light, his partner's throwaway "Getting Better" still pops Stevie Wonder-ous, but its sequential partner "Fixing a Hole" bounces like a roadside carnival and "Lovely Rita" remains simply daft. Nevertheless, a documentary in both DVD and Blu-ray make an open-and-shut case for Sgt. Pepper being the first lunar landing in music – a leap for mankind. As such, not including the new stereo mix on vinyl feels like that hole didn't get fixed.

"None of us wanted to make [Their Satanic Majesties Request], but... Sgt. Pepper's was coming out, so we thought basically we were doing a put-on," admits Keith Richards inside the quad-folded binder housing mono and stereo wax of the December 1967 release, with accompanying CDs of each therein. The Stones' bandleader would have to settle for "the first 3-D record cover of all time." Funnily enough, Sgt. Pepper gets the 3-D art treatment in this deluxe configuration, Michael Cooper having shot both original covers.

All four Beatles appear on the front sleeve to the Stones' "put-on," McCartney and Lennon also adding uncredited vocals. Where the album belly flops at summer of love effervescence save for "She's a Rainbow," "2000 Man" paves the way for Beggars Banquet's "Sympathy for the Devil." A "Strawberry Fields"-like intro touches off the Middle Eastern free jam "Sing This All Together (See What Happens)," which is outmatched by the record's only true fail, "Gomper." Even so, it's followed by "2,000 Light Years From Home," the Stones' psych apotheosis.

If Satanic Majesties remains a claptrap, it's a singularly fused one by the greatest rock band of all time and very much its own album, song cycle, and bookend to a singular May-December romance. 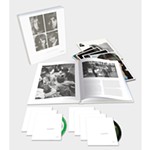 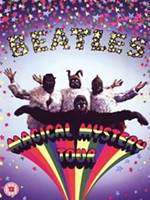