The Half-Century Psych of Shiva's Headband 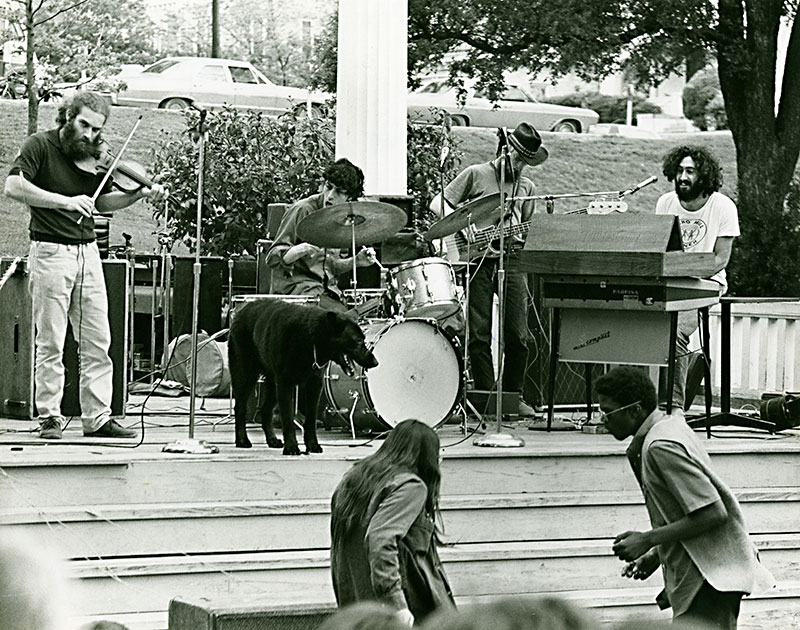 Of all those aggregations, only Shiva's still stands.

And what a holy cacophony all of them wrought, hoping to escape city limits and burst through to national awareness. The success rate was brutal, yet in terms of bending consciousness and helping forge a creative community for the coming tsunami of live music that began in the Seventies and continues to this very day, these early musicians and more etched their names into the Austin history books as surely as the Grateful Dead did in San Francisco and the Velvet Underground in New York. Except it was all happening almost smack dab in the middle of the Lone Star State, and not many outside the area knew it.

For me, Austin became a shimmering jewel lying just beyond my grasp in the Sixties. It held a magical spell for a Texas teenager searching for a menagerie of people who supported each other and looked for the best to happen.

A decade earlier, my parents loaded up our pink 1957 Chevy and headed out of Houston for the Hill Country around Austin and Wimberley. Long drives in the sweltering summer heat put the five Bentley children in the backseat into a mild state of delirium, but we never complained during those flashes of freedom. We just looked out at the highway ahead dancing in the heat and counted the hours until we got to those small air-conditioned motel rooms, often built out of limestone, on the outskirts of town.

Driving down Congress Avenue toward the Capitol, then, felt like discovering the yellow brick road. There was nothing like it in Houston, that's for sure. And visiting the big Littlefield Fountain at the University of Texas with the bronze horses trying to leap out of it was surely a pre-psychedelic vision.

In an instant, I knew I would find my way back someday. Austin felt like home, even to a 7-year-old.

Galveston and Houston boasted unbeatable music at that juncture, everyone from Bongo Joe beating on his 55-gallon oil drum on the Seawall to Lightnin' Hopkins playing in a chair on Dowling Street near downtown. Nevertheless, both places lacked the freakdom gene. Real life buttoned them down good and hard.

Those early memories feel like fevered dreams now, but they blasted off onto a trajectory integrating me into the greater musical universe. Even then, 60 years ago, it was the only thing that made any sense at all.

When the 13th Floor Elevators came roaring into Houston in early 1966, the die was cast. Everything about them spelled Austin. And at the point that mescaline and LSD figured into the equation, it was only a matter of time before anyone with even a modicum of imagination wanted to move to River City.

Took me a couple of years after finishing high school in '68 – a felony narcotics conviction for possession of two joints in 1969 and then a near-psychotic breakdown – but Austin obviously had my name on it. So did Shiva's Headband.

On the night of May 3, 1969, I went to see the group for the first time. Vulcan Gas Company resided at 316 Congress, home base for Conqueroo and other local acts. When I enrolled at Southwestern University in nearby Georgetown in '68, it became a weekend destination whenever possible. My friends and I would hitchhike 30 miles there, then catch a Greyhound back to Georgetown, the last one leaving at 2am. Luckily, the bus station sat right across the street from the Vulcan.

Conqueroo had left town for San Francisco and the 13th Floor Elevators left their minds anywhere but the bandstand, so Shiva’s became the house band for hippies in Austin.

By then, the Conqueroo had left town for San Francisco and the 13th Floor Elevators left their minds anywhere but the bandstand, so Shiva's became the house band for hippies in Austin. That Saturday night show proved a glorious celebration of everything psychedelic rock & roll ever promised.

Spencer Perskin's electric violin painted the walls of the Vulcan in a variety of spine-tingling colors, while his vocals were a call to eternal bliss. Pianist and vocalist Shawn Siegel mixed Thelonious Monk with Jelly Roll Morton on his keyboard, and also sang with a sense of counterculture devotion. Drummer Jerry Barnett never met a backbeat or shuffle he couldn't turn into an intricate examination of what a drum kit was capable of, and bassist Kenny Parker stood stock-still, playing hypnotic basslines like he'd invented them, which he probably had.

That left down-home guitarist Bob Tom Reed to mix country and outer space on his six strings, pushing Shiva's into the outer limits. A night for the ages, and when their last song featured the one-word chorus "Yes" repeated over and over for five minutes like a mantra meant to crack the code of cosmic salvation, the universe was mine for the asking. My feet never touched pavement in exiting the Vulcan on a cloud so full and fluffy it felt like I'd literally ascended to the promised land.

Later that night, it all came crashing down.

Two Texas Rangers and several George­town cops kicked in my dormitory door and found two joints in my desk. I was arrested and soon arraigned in Round Rock in front of a hanging judge, who ordered me into the Georgetown jail, built in the 1850s. It was a few days before my parents bailed me out, so I was a total fried-pie knowing things would only get worse. They did.

Finally, a year later, with a sentence of five years probation hung around my neck, I found my way back to Austin and a $35 garage apartment at 2200 Leon in the West Campus area. I was free, thank God, so I went searching for Shiva's Headband to see if they were still singing "Yes." They were.

The quintet played everywhere that summer of 1970: anti-war benefits, opening shows for Janis Joplin and Canned Heat in the UT gymnasium, and the last concerts at the Vulcan. They became the pied piper to regaining my sanity, revealing a three-dimensional path to wonders beyond everyday eggshell existence. Soon, they also helped inspire the whole future of Austin's live music gestalt.

Born in Brooklyn, Spencer Perskin got uprooted at 4, lived in Memphis until he was 8, then ended up in the Dallas area. Dad traveled as a salesman, so his son saw the sense of a so-called normal life. Then the rock & roll bug bit him and the classically trained violinist suddenly found himself sidestepping conformity. He also discovered the distinct advantages of an altered consciousness, and quickly applied that to his musical explorations.

"I had an agenda when I was very young," says Perskin, 74, "and knew I could communicate to the world through music. It's the universal language, the only thing that really is. I wanted to see how far I could take it, and a rock & roll band was the vehicle to try."

That openness to experience led to his expulsion from North Texas State University in 1964, leaving Austin the logical next move.

The UT student union centralized musical experimentation then, with old fiddle songs bumping into country blues and becoming its electric offspring. Janis Joplin, Tary Owens, Tommy Hall, Powell St. John, Pepi Plowman, John Clay, and many other inquisitive young students pushed the limits in all parts of their life and often in the direction of California. Perskin headed west in 1966, but the West Coast didn't agree with him, and he was back in Austin after a year, living at the Jewish Student Center where he met pianist Shawn Siegel. 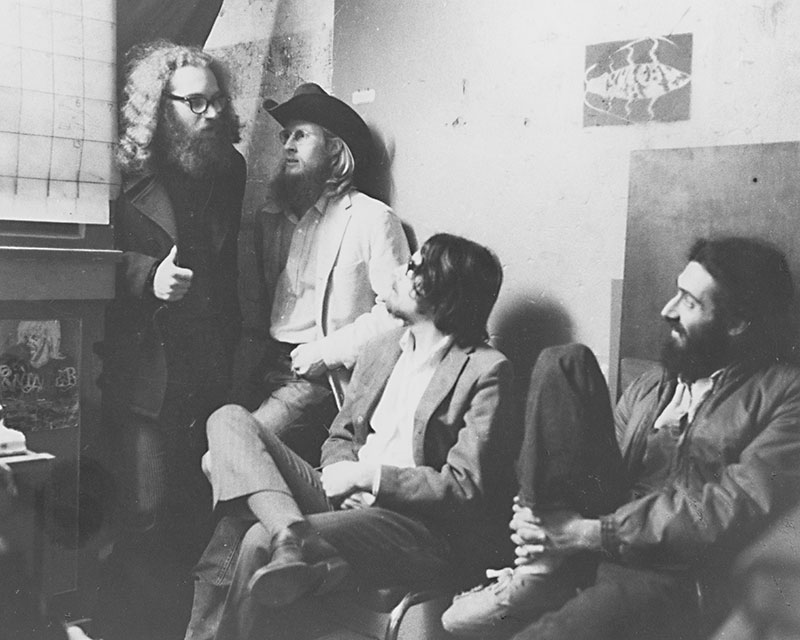 Perskin had already written their first original song, "Kaleidoscoptic," on an acid trip in the Bay Area, and as backed by "Song for Peace," the band pressed a debut single on Ignite Records in 1968. Wonder of wonders, it actually started getting airplay on local radio stations. As such, the band had the entire playing field in Austin to itself for a brief period, and again decided to head for California. It didn't work the second time either. In Texas, the plot thickened quickly.

When the Vulcan finally closed in spring 1970, Shiva's Headband was under contract with Capitol Records. With some of the advance money from the label, Perskin joined with Eddie Wilson and a $1,000 check from writer Bud Shrake's Mad Dog Inc. collective to open the Armadillo World Headquarters. The former armory across the Colorado River from Downtown took all the rocket fuel Austin's delusions of grandeur could handle.

Shiva's Headband played the grand opening in late summer 1970, and while liftoff wasn't exactly instantaneous for the big room, it wasn't long before the Armadillo had become the go-to venue in the Southwestern U.S. for bands of a certain ... liberation. The Fillmores had closed on both coasts and Austin was being discovered as a big, fat oasis between coasts, full of fired-up college students and their dropout counterparts who weren't about to move anywhere else. Before you could say "Doug Sahm," "Bruce Springsteen," and "Willie Nelson," the Armadillo had the city hosting music of all stripes and persuasions.

For Shiva's Headband, however, their Capitol bow Take Me to the Mountains, with recently added vocalist Susan Pers­kin, came and went fairly fast. A second album, Coming to a Head, followed on Armadillo Rec­ords. No liftoff there either.

Yet that didn't stop Shiva's from maintaining their stature as the most solidly connected and caring band in town. They specialized in benefits and goodwill, never turning their back on a good cause. And while their core personnel changed, the spirit of the band, its shows, and the band's oeuvre thrived.

So it's remained for a half-century.

Two more albums joined the first two, as did decades of experimentalism that deserves its own room in a Texas music history museum. Spencer Perskin and Shawn Siegel are still brothers-in-music, having shared a mixture of legal challenges and lifetime peaks like certified spelunkers of the soul. To see them now, each still going strong, is to experience Austin history at its purest.

Shiva's Headband has been to the mountaintop. They're no doubt making plans to return, too. After all, there the answer remains, eternally, "Yes."

A version of this article appeared in print on December 1, 2017 with the headline: Yes 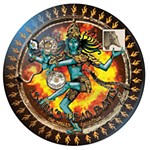 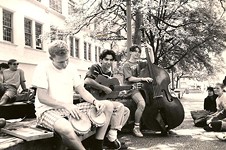 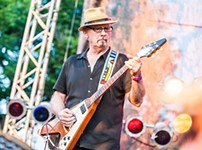