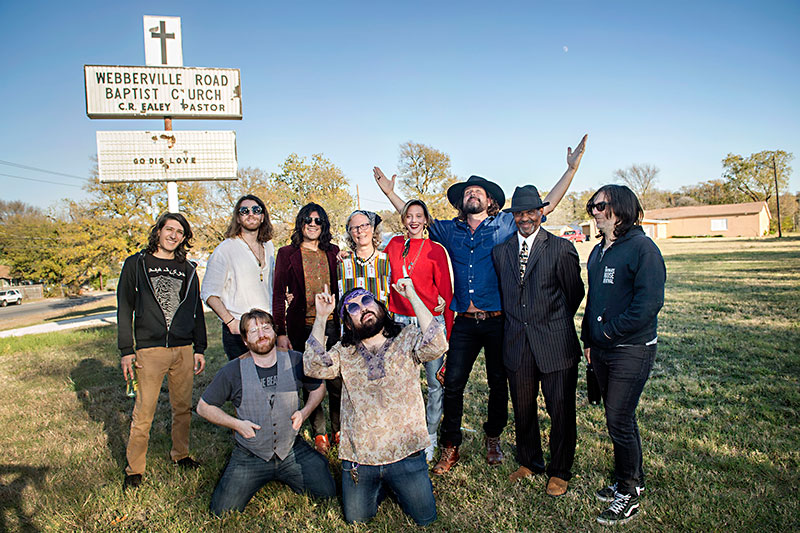 Late Sunday afternoon, Topaz McGarrigle stood in the grassy, multi-acre expanse fronting Webberville Road Baptist Church. To his right, African-American elders in exquisite suits moseyed out of a worship service. To the left, a day party raged at Sahara Lounge, with the marquee reading "Lesbian Wedding." Betwixt, he visualized what the lawn would look like for Saturnalia Fest.

"The stage will be here, Ra's temple goes there, all this will be fenced in," waved the native frontman for Austin's wildly popular Afro-psych spectacle Golden Dawn Arkestra. "Everything will be lit up with liquid light shows."

McGarrigle and his friends from underground space haven the Electric Church were in crunch time orchestrating the scene's newest DIY music spectacle: a four-day party with a name evoking toga-wearing revelry. Launching with pre-parties at Electric Church (Thu.) and Hotel Vegas (Fri.), Saturnalia goes into full effect Saturday and Sunday on Webberville Road.

"There's a serious need for [an event like Saturnalia] in this town, with big fests dropping out and a lack of smaller grassroots fests going on," offers McGarrigle. "We're also encouraging people to get weird – dress up, wear masks. That's also lacking in our community right now. Everything's gotten so white-bread."

"We live in a time when there are a lot of hurting people, therefore, when approached with the idea of Saturnalia … we welcomed and agreed that this activity would be an excellent time to promote healing, harmony, and happiness in the community."

Rift in the Drift

Three months after organizers launched a website advertising the Driftwood Music Festival as a continuation of the Old Settler's Music Festival with the phrase "Welcome back to our party," the endeavor now feels like a failed mutiny.

OSMF representatives filed suit against two former team members, onetime president and former director of operations Scott Marshall and production manager Ryan Brittain, whose proposed event was a clear act of aggression against the former convergence: same dates, same genre, same land OSMF was recently evicted from. This month, a Travis County District Court judge wrote in a court order that DMF had "misrepresented themselves as being OSMF," "used OSMF's confidential information and trade secrets to unfairly compete with OSMF," and "usurped OSMF's 2017 plans to hold their 2018 festival at the Salt Lick and Camp Ben McCulloch." A temporary injunction was handed down, blocking organizers from booking, promoting, or selling tickets to the event.

A trial is set for Jan. 22, but OSMF Executive Director Jean Spivey revealed this week that the two parties are already in settlement talks. On Monday, DMF organizers announced they'd be searching for other dates to hold the fest at Salt Lick Pavilion. The first-year fest now faces major uncertainty for a 2018 debut, compounded by rumors that their booker, Nine Mile Touring agent Tim Regan, has resigned.

"Playback" emailed Regan about the matter, but didn't receive a response. Meanwhile, Spivey reports that the OSMF team has a lot of work to do setting up the infrastructure at their new site in Tilmon near Lockhart. Their early lineup promises new blood with Billy Strings, Colter Wall, and Greensky Bluegrass. More performers are expected to be announced this month.

Brown Sabbath finally met Ozzy Osbourne! The Prince of Darkness and his spawn, in town to film their A&E show, got a private performance from Brownout's Black Sabbath tribute band of Latin-imbued takes on "Fairies Wear Boots" and "Sweet Leaf" at the Little Longhorn Saloon, after which the Ozzman muttered, "Fuckin' brilliant."

Buy the Parish on eBay. Owner Doug Guller put the Sixth Street venue up for sale online Wednesday with starting bid of $1. The deal includes the brand, a 12-year lease, and two five-year options on the 5,300-square-foot club. Guller is currently divesting from his music interests, having sold the Scoot Inn to C3 Presents in July.

Before Dead & Co. steal faces at the Erwin Center Saturday night, distinguished Grateful Dead biographer and radio show host David Gans will play with the Barton Hills Choir, a group of elementary schoolers known for covering "Ripple" and "Brokedown Palace." After appearing on Gans' Sirius XM show Tales From the Golden Road, BHC director Gavin Tabone invited the singer/guitarist to come play with the kids. "I've always known the music of the Grateful Dead would outlive the people who made it," mused Gans this week in an email. "That is truer than I could ever have imagined: There are musicians all over the country playing these songs and improvising on these themes and grooves. Teaching it in school is another great (and valid) honor for this great American songbook."