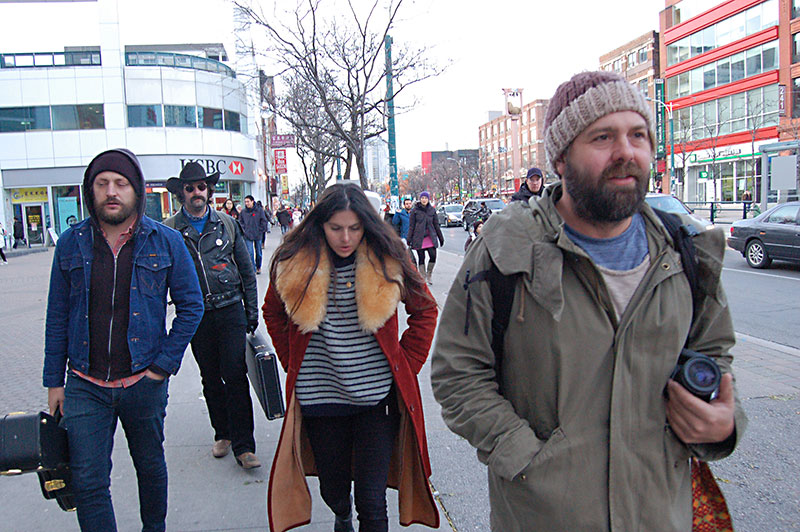 Toronto, Nov. 11, 6:15pm: The stage manager at Cameron House is pacing and swearing under his breath. He has six sets from Austin musicians to get through in two hours, and the program's already running behind.

As Lindsey Verrill steps onstage with her banjo and arrests the room with her haunting, atmospheric folk, Chris Brecht calmly assures the organizer that they're on time. By the time the third set ends, with Sisi Berry of Torino Black fronting an unlikely band composed of Otis the Destroyer's Taylor Wilkins, Croy & the Boys' Corey Baum, and electronic soulman Mobley, the showcase is back on pace.

"You guys are like a traveling circus," beams the stage manager to Brecht as Acey Monaro of Go Fever quickly takes the mic. "It's freaking awesome!"

Brecht smiles back with the same measured coolness displayed at the outset of the show. As ringleader of Project ATX6, the Austinite's become used to salving a million mini emergencies and projecting a measured calm amid the chaos.

"When you do something like this, you have to learn to live with fear a little," he muses. "You have to be an escape artist – know how to make a decision in a different language in an instant that can make or break an entire trip.

"There's no doubt I've made every single possible mistake along the way," he adds with a laugh. "But when you're done with it, you're not embarrassed, because you do eventually figure it out."

Sitting in a small Toronto coffee shop on a chilly morning, Brecht takes a moment to reflect on how Project ATX6 has evolved over the past four years. What began at South by Southwest as a conversation with Music Canada Vice President Amy Terrill about getting Austin artists to North by Northeast has become a pivotal export program for local musicians, every year offering the opportunity for six handpicked songwriters to play a series of music festivals around the globe.

Brecht anticipates breaking even on the estimated $40,000 the project has already cost, though he’s personally tallied at least $20,000 of credit card debt.

Each year, Brecht assembles a unique cohort of talent, purposefully diverse in background, genre, and stages in their career. Working from recommendations from past alumni, venues, and his own instincts, he attunes to who's been hustling and putting in the grinding work of local shows, and for whom the opportunity would actually be most beneficial. Past songwriters in the project include rising Austin artists Carson McHone, Jonathan Terrell, and Jai Malano; experienced scene veterans Leo Rondeau, Gina Chavez, and Elijah Ford; and wild card talent Aisha Burns and Beth Chrisman.

"I don't want to pick just the front people, the shining stars in the Austin music scene," offers Brecht. "Side musicians know how to work in a group, and they play different instruments than we're used to. I'm trying to mix talent because that's what makes the group change every year, and then they bring a lot of their personalities which you can't ever really predict. It's all part of that inexplicable algorithm that doesn't have any numbers."

Most of all, the project's majordomo seeks acts with momentum, but who are also in need of just the right opportunity. At 37, he's looking to offer the bit of mentorship, experience, and support artists require to get to the next level he wished he had received as a struggling young songwriter.

"The musicians in my era really wanted a record deal, but I don't know that a record deal is really the expectation of an artist anymore in terms of whether you can be a good, successful musician," he says. "In that regard, I wasn't smart enough then to know that maybe I should just be doing this on my own, especially knowing how resourceful I am now. Every day I say I wish I knew then what I know now."

Brecht moved to Austin with his longtime girlfriend and guitar in 2006 after earning his master's degree at Colorado State University. The girlfriend lasted six months in Texas, but the guitar stayed, even as he found himself living week-to-week in a seedy South Austin motel. He eventually gained footing among the emerging cadre of songwriters and fervent alt.country scene at the Hole in the Wall (revisit "Don't Look Back," April 4, 2008).

"Then I just got burnt out," he admits. "We were making good records and playing good shows, but for some reason you come home and you're still not satisfied. I got really tired and knew I had to step back from gigs. One month turns to two months, two months into six."

He shifted his creativity into more entrepreneurial endeavors by founding Austin Independent Radio, a streaming app for local music. Following his fortuitous conversation at SXSW, he saw the need and potential for a program like ATX6, so Brecht recruited sponsorship from local venues and SXSW to help get the initial group to Toronto for NXNE. That then opened the door to play the Reeperbahn Festival in Germany with last-minute funding from the City of Austin.

The project's itinerary has since expanded to include Austin Week in Angers, France (see "The French Connection," Sept. 9, 2016), and this year, Japan. While the tour has helped artists like Terrell and Dana Falconberry secure European record deals and make connections for others to return abroad on their own, ATX6 members insist the real value is the bond formed among the group through the rigors of travel. Brecht credits housing everyone together in HomeAway rentals, Project ATX's main sponsor.

"We've scraped by with hardly anything, but I also don't ever want the project to get to where we just show up on a tour bus," says the organizer. "This is meant to be a real experience, not some glamorous TV show."

Not that Brecht isn't ambitious about the project's future. He's filed for ATX6 to become a nonprofit, which should help build on the fundraising he's pieced together from local businesses like Yeti and Altstadt Brewery. And with the mayor's arts omnibus specifically calling for increased export and professional development programs (re-read "We Can't Make It Here Anymore," May 27, 2016), he's hoping for increased support from the city in at least helping open more doors nationally/internationally.

This year, Brecht anticipates breaking even on the estimated $40,000 the project has already cost, though he's personally tallied at least $20,000 of credit card debt over the past four years. With more funding, he hopes to hire logistical support as well as professional help to finish the documentary series on the project he's meticulously filmed since its inception.

"As an artist, I always felt that the experience itself is the real value," offers Brecht. "When you put your feet to the concrete in a foreign country, that experience is going to translate into art. Your imagination is a big dark space, and when you go to Japan, that whole room opens up to ideas and color, and how to get around and actually learning how to be there.

"That's why this is the greatest thing I've seen in my life and I wish it were around when I was hustling and getting to the point where I needed that little kick over the top of the mountain."