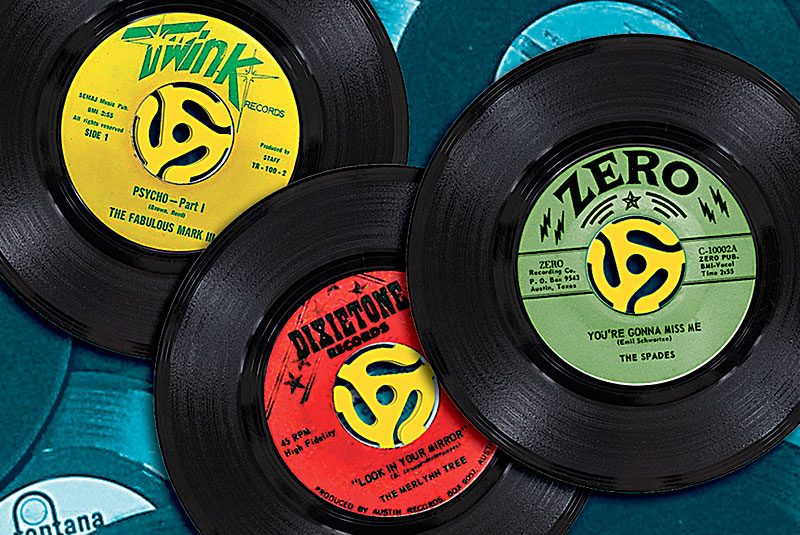 My air-conditioning repairman recently bought a cheap box of vinyl at a garage sale and sold a single LP from it on eBay for $175.

"I think it was titled Live at Raul's," he recalls.

Of course he'd stumbled upon ground zero documentation of Austin's Eighties punk boom: a split capturing the Big Boys and the Dicks leveling their scene headquarters. That's a modest example of the scores vinyl miners dream about, but it got me thinking. What are the most valuable, rarified, and coveted records that have sprung from our city limits?

Forty Seven Times Its Own Weight

April's Record Store Day and Black Friday compete as the two most profitable annual days for Austin's record retailers. No surprise, then, that the RSD organization gets in on the action with 150 special releases for holiday shoppers, hitting shelves on Friday. Here are the ones with local ties:

Toni Price's Tuesday night "hippie hour" at the Continental Club came to an abrupt end last week after a continuous run – except for a couple of years spent in California – that began in 1992. Club owner Steve Wertheimer didn't respond to an email asking the reason for the quick exit of the longest-running weekly residency in Austin. The singer is currently up for an Austin Music Poll Hall of Fame nomination, for which you can find a ballot in this issue.

Shearwater's Jonathan Meiburg has formed a new band, Loma, with Emily Cross and Dan Duszynski of atmospheric indie duo Cross Record and signed with his Austin band's label Sub Pop, which will issue the new trio's self-titled album in February. Debut single "Black Willow" showcases an enchanting blend of art folk and indie rock. Meiburg initiated the collaboration when Shearwater toured with Cross Record. "I fell in love with their music and I wanted to know how they did it," he wrote.

Cindy Cashdollar is out of the hospital after falling asleep at the wheel and crashing her car into trees in rural New York, according to Bluegrass Today. The slide guitar phenom, who left Austin in 2015, suffered a fractured vertebra. Get well soon, Cindy.

Mike Judge's utterly brilliant Tales From the Tour Bus series on Cinemax closed season 1 with an episode on Blaze Foley. Many local scenesters, including Chuck Lamb, Hank Sinatra, Harold Eggers, Kinky Friedman, and Gurf Morlix, got animated for the humorous and loving look at the Duct Tape Messiah. Entertaining vignettes include Foley and a meth cook carrying a drunken Townes Van Zandt through a graveyard as he shops for a burial site, and the former getting his ass kicked by late Kerrville Folk Fest founder Rod Kennedy.