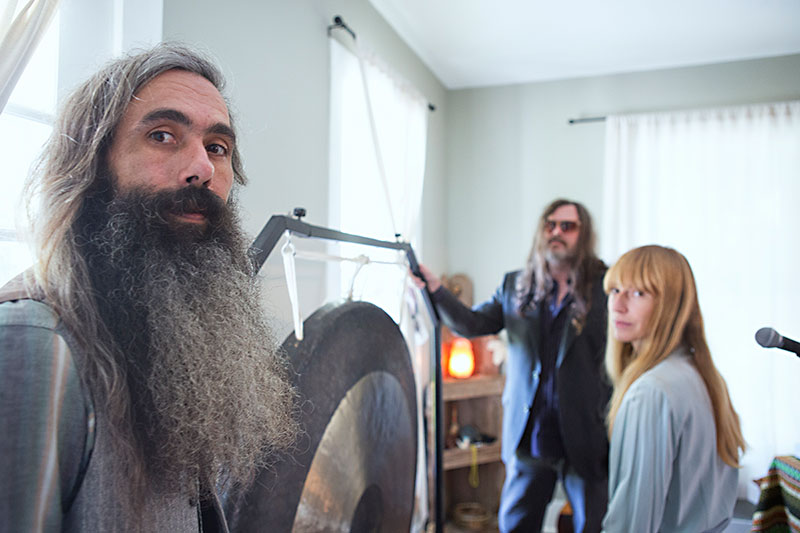 Last year on Halloween night at the Blue Starlite Drive-In, Nosferatu awakened from his coffin to Dallas Acid drummer Linda Beecroft scraping her fingers across the rim of a gong. Her two bandmates Michael Gerner and Christian Havins played dueling Moogs drenched in delay, and guest Paz Lenchantin of the Pixies supplied a bed of tension on her violin.

The music they played that night was composed by the Brain.

That's the nickname of Gerner's hulking modular synthesizer that guides the sound of ambient local trio Dallas Acid. It takes up two full walls of the band's rehearsal space and sounds both futuristic and retro, producing distinctly warm yet robotic tones reminiscent of German electronic pioneers Cluster and Tangerine Dream. Built over the course of a decade, it's far too big to bring to most shows. A humid gig at the Sekrit Theater during South by Southwest 2016 nearly fried the temperamental circuits. Its maker rushed the machine home, maxed the AC unit for the weekend, then crossed his fingers.

Even gear geeks have trouble understanding how to play modular synthesizers, but the core concept is simple. A typical synthesizer features a keyboard with electronics under the hood that give each one a signature sound. Modular synths essentially reconfigure the guts of those keyboards, sold separately, to create a custom rig that's patched together with a web of cables.

Electronic musicians fetishize modular systems because of the limitless customization. Modules like Dallas Acid's Haible Krautrock Phaser can cost upward of $400, so it's not a cheap habit, but the choose-your-own-adventure style of patching together oscillators, envelope generators, and filters creates abstract results and happy accidents more akin to mixing paints than playing a keyboard.

It’s pastoral, but spacey. Tense as well as serene. The music feels like looking into a dark cave.

"You're somewhat controlling it, but it's almost a lucid dream," says Gerner, staring out into the field behind his local homestead while a horse grazes in the distance. "As a musician you can tune in the notes to sound more appealing, but it kind of creates things that I'd never think of doing and I wouldn't even be competent enough on the keyboard to actually play."

The band's influences cotton to Seventies prog rock, yet Dallas Acid's music isn't rooted in virtuosity as much as a sense of scene. They titled their 2016 debut Original Soundtrack, leaving the listener to imagine the accompanying film. Each song clocks in over 15 minutes long, full of dissonant drones that unfold in unexpected directions. Beecroft whispers syllables soaked in reverb and Havins supplies melodic Moog flairs that hover over the blankets of sound. It's pastoral, but spacey. Tense as well as serene. The music feels like looking into a dark cave. Who knows what's in there?

Forthcoming LP Spa Hunter incorporates some pop structure and sounds less like a dark wash of noise and more like, well, a jacuzzi. Sequences from the Brain bubble underneath gentle harmonies with distinct rhythms. Add a flute and it's a dead ringer for Kraftwerk. Melodies appear and dissipate, channeling Brian Eno's idea of slowly lowering the volume on ambient music until it's barely audible. In fact, the kitchen stereo system in Gerner and Beecroft's abode is arranged with three speakers matching the diagram on the back cover of Eno's Ambient 4: On Land from 1978.

Inspiration also derives via the following decade's idea of luxury, hence song titles like "White Wine" and "Beamers and Bloody Marys." A teaser video shows cocktails mixed in slow motion as Beecroft and Havins lounge poolside in white suits. It couldn't be further from the band's spartan lifestyle in far South Austin, although they do admit to a favorite spa: La Paloma in Truth or Consequences, N.M.

Like a spa, there's a calming sense of patience to the music, a reflection of its makers' experiences. The group's pair of synthesists spent a decade in anything-goes rock band Vietnam and Beecroft drummed in Velvet Underground acolytes Golden Animals, the trio moving as a group to Austin from NYC in 2014. Seventies ambience rather than the brooding Eighties darkwave that drives Austin's electronic scene informs Dallas Acid. According to the principals, they learned to use their equipment by recording 30 albums' worth of unreleased material. Three more will soon see release, including a live rendition of their Nosferatu score.

That they're sitting on such a backlog adds to a well cultivated aura of mystery surrounding Dallas Acid. All three are fixtures around Austin, however. Gerner and Beecroft, long a couple, work at two popular restaurants and are unmistakable due to her six-foot Swedish frame cloaked in flowing white dresses and his long, shaman-like beard. Havins flies under the radar, but also rocks a sizable beard and is clearly a musician. Based on appearance alone, you might assume their band plays Mohawk next week.

That said, the triumvirate exists apart from the electronic community that birthed the city's most notable synth export in Holodeck Records, even though they were featured on Survive's 2016 Fact Magazine mix.

"We've never been involved in an electronic scene. We've always sort of been on our own. It's awesome to find these surprises," says Havins, speaking of a "post-rave" they recently played at Eastside DIY studio ATM Gallery.

This outsider status is partly due to the fact that they rarely perform live. Crowd chatter can easily drown out the quieter moments of their sets, like during a January show at Stay Gold where regulars weren't expecting ambient acts. Dallas Acid prefers unique locales like a show under the Montopolis Bridge, the Scobee Planetarium in San Antonio, and experimental dinner party show series Monkey Town 6. There's also that gong, which glues the music together, but like the Brain isn't the easiest instrument to transport.

"It's the Earth, it's the universe, it's all one. It's got it all. It's another blanket, just like a synthesizer," says Beecroft. "And it's about the same weight as me, so let's just say loading in is not always the most fun thing."

Found on Craigslist at a steal of a price, the gong sounds otherworldly. A collection of mallets lays in front of it in the band's practice space at Gerner and Beecroft's house. The latter brushes up against the edge of the gong and a rich tone emerges nearly defying the concept of pitch. Since synth sequences from the Brain provide so much rhythm, the percussionist's minimal drum set of toms and a couple of cymbals was built more for punctuation than a beat backbone. She plays with a great deal of restraint.

Dallas Acid sounds surprisingly mature for an act that's yet to attain headliner status, but there's still a sense that something's missing. By its nature, ambient music takes a backseat to the scene, and perhaps that's the final piece of their style. Maybe that's a planetarium light show, the rumble of cars passing overhead, or a vampire stalking its prey.

Or it might just be the Brain, sampled for live shows and kept safe and out of sight.

Whatever it is, once the band opens up their archives, it won't be missing an audience.

A version of this article appeared in print on October 27, 2017 with the headline: Ambient Hunters