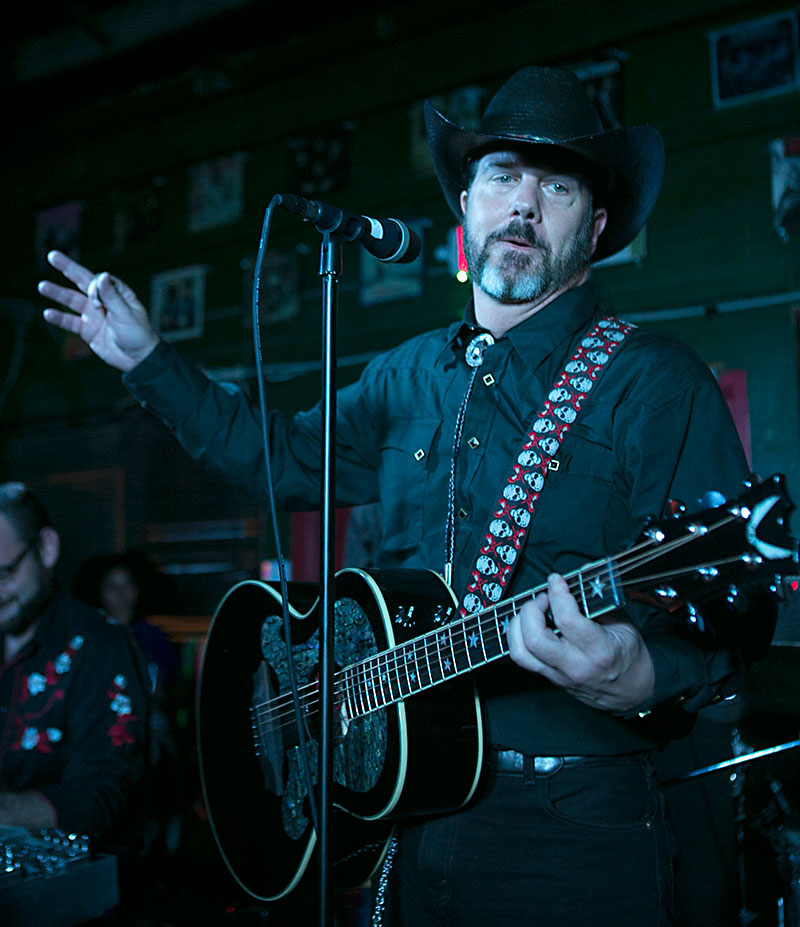 Man in Black: David Vincent at his South by Southwest showcase in March (Photo by Jana Birchum)

"Man, it was like a nuclear bomb had gone off," remembers David Vincent of arriving in the small Southeast Texas town of Lamar after Hurricane Harvey hit last month. "It looked like Hiroshima."

In the wake of the storm, the now Austin-based singer – famous for fronting Floridian death metal pioneers Morbid Angel during the band's heyday – and some of his biker buddies loaded up a vehicle with "a cooler full of beer and bunch of chain saws" to put some muscle into the recovery effort. They spent the next several days clearing downed trees from a neighborhood and unloading trucks of donated goods.

"I felt real proud of where I live," reflected Vincent, who left Florida for Texas three years ago. "And proud of the fact that people weren't complaining. They were getting after it."

"It wasn't put on. Hell, I've always loved Johnny Cash, David Allen Coe, Waylon [Jennings], Willie [Nelson], and George Jones," offers the North Carolina-reared singer of his foray into country, while perched on the column-lined back patio of his Georgetown estate. "Danny and I started hanging out and one night after a bottle of tequila, we just started writing songs."

That collaboration resulted in two sides of hellraisin' outlaw country on this year's Drinkin' With the Devil 7-inch from Austin imprint Chicken Ranch Records.

Even in a cowboy hat, Vincent – with black locks, copious skull chains, and a voice that booms like a microphone even in casual conversation – exudes a prince of darkness mystique. No surprise then, he remains in the metal trade, spending much of this year playing huge festivals in Russia and Western Europe with I Am Morbid, which performs classic material from his former band. Asked about his relationship with Morbid Angel, Vincent is short: "The only person in Morbid Angel is Trey [Azagthoth]."

As for his next release, Vincent says it depends on what he gets to first. It could be a full-length country disc or a metal album from a new project that he won't discuss other than to say it includes "a couple people who have some history" in the scene and that it would be "an international thing." In either instance, he says, it will be genuine.

"I just don't care for commercial music in general. I don't care for it in rock, metal, or country. If something feels authentic, that's what moves me."

Eddie Wilson deserves all the credit he gets – and then some. By uniting "heads" and "necks" though music at his Armadillo World Headquarters in the Seventies, he catalyzed a culture that Austin simply would not be Austin without.

Still, he wasn't able to see the future. In this case, that's the fact that the southern location of his second iconic business, comfort food and music joint Threadgill's, was built on land that would one day become so pricey that neither a restaurant nor music venue could reasonably inhabit it. Hell, that plot is so valuable today that if Wilson owned it, he'd probably kick himself out!

Last Friday, Wilson told "Playback" that Threadgill's lease was up and he'd been unable to complete a new contract with his landlords. He told employees he planned to close the Riverside location after South by Southwest 2018. A week later, consider the announcement an SOS signal intending to, in the short term, implore property owners to proffer a new lease and, in the long term, open dialogue for Threadgill's to be included in future plans for the property.

"I would hope a developer will come along who wants to build something and have Threadgill's be part of it," said Wilson.

There's a lot to be sorted from this situation, so don't give up eating chicken-fried steak just yet. Meanwhile, look for the entrepreneur this Sunday at All ATX's "Back to the Armadillo" concert on Auditorium Shores (see "Music Listings," p.62), where he'll surely be a guest of honor.

Robert Plant & Patty Griffin, once Austin's foremost musical power couple, were spotted shopping together at Waterloo Records last Thursday – the first sighting of the two together since their well-publicized split in late 2013, at which point the ex-Led Zeppelin frontman ceased being a regular citizen you could run into at record shops, grocery stores, or driving his modest, navy blue Crown Vic.

Stevie Wonder Took a knee during a spacious, jazzed-out chromonica rendition of "The Star-Spangled Banner" interspersed with "Lift Every Voice and Sing," aka the "Black National Anthem," during his Sunday close-out of the Formula One U.S. Grand Prix at Circuit of the Americas. Along with imploring humankind to work toward a "united planet," Motown's most enduring figure also addressed the recent National Enquirer headline that he's regained sight: "I didn't do the Formula One because I can't see yet. When there's something for me to tell you, I will." See a full concert review, plus a write-up of Justin Timberlake the night before, at austinchronicle.com/daily/music.

Don Pitts, former head of Austin's Music & Entertainment Division, has been hired by the City of Pittsburgh to help strategically develop their musical ecosystem and increase peace between venues and neighborhoods. This month, Pittsburgh venue James Street Speakeasy announced it would close due to constant sound complaints from neighbors. Besides his coincidental last name, Pitts and his new Sound Music Cities consulting business appeals to Pittsburgh with a track record of reducing sound-related complaints in Austin.