Underground turntable maestro needs no introduction to local DJs, but to the broader community he's flown under the radar 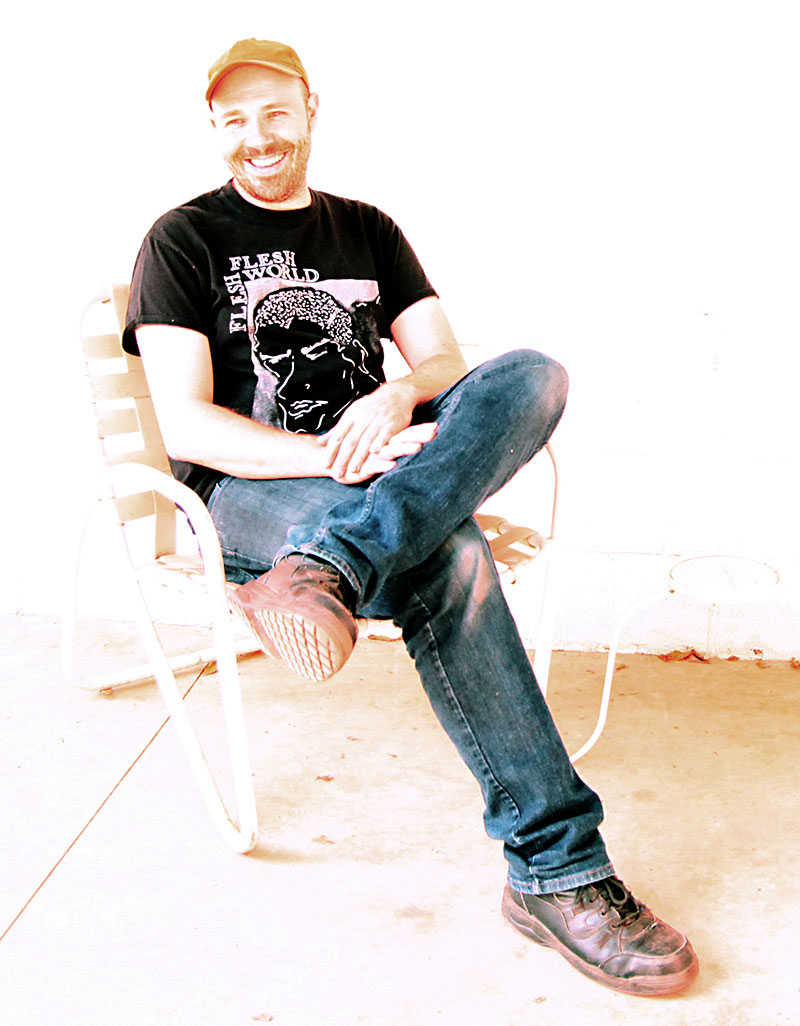 For the release party of his 2016 debut LP Meditations/Industry at End of an Ear, Bill Converse brought out the holy trinity of techno gear: a Roland TR-909, TR-808, and TB-303. Acid melodies ping-ponged over scattered kick drums booming an unconventional disregard for downbeats. Those two drum machines and bass sequencer appear on thousands of records, but Converse's mindset made them sound new.

Browsing End of an Ear's new location with him a year later reveals the breadth of the local producer's interests. He thumbs through the new arrivals, then wanders over to the international music section and notices an outsider folk compilation reissued by Mississippi Records. Next stop is the experimental shelves, where he gushes over obscure deceased ethno-electrician Mus­lim­gauze, who like Converse has been championed by the Dark Entries label. As conversation turns toward his new album The Shape of Things to Come, he asks to find somewhere to sit to better gather his thoughts, never making it to the techno section where his new LP is prominently displayed.

Converse, 34, needs no introduction to underground Austin DJs, but to the broader community he's flown under the radar. He began playing records in his teens in Michigan, then relocated to Austin over a decade ago. Since then, he's shifted from fiery disco sets at shuttered venues like Chain Drive to hard and fast techno at makeshift dance spot Kinda Tropical. His skill on turntables – sometimes playing three records simultaneously – is unparalleled amongst local electronic DJs, but his productions have earned him international acclaim and bookings across the world.

His productions have earned him international acclaim and bookings across the world.

"I start kind of meticulously, but the more I have a plan, the more it sounds like I'm engineering something and it gets stale. The less engineered it is, the better," says Converse.

The Shape of Things to Come builds on that spontaneous energy.

His process often starts where many producers end: with an equalizer. He's evolved to a modular synthesizer setup due to the space constraints of his small East Austin studio, and a resonant EQ helps him create sonic lanes for each instrument to breathe. He also EQs distortion and overdrive on specific frequencies to keep the sound textured, but focused. Drums tornado around the beat, with rhythms veering more toward experimental than classic house or techno.

"All the music is experimental for me," he nods. "Maybe it's not as noisy, but I'm just trying different combinations of knobs and sliders and seeing what I come up with. If it works, roll with it. If it doesn't, keep rolling with it."

Although his records are currently Austin's biggest dance music export, they rarely make it into his DJ sets, which feature mostly older techno records from the Nineties. He hauls singles from Detroit and Chicago producers like Jay Denham and Mystic Rythem in his carry-on for overseas gigs in Paris and Berlin, as well as a USB stick loaded with his own edits of his favorite tracks.

"A lot of those faster-tempo records, I slow them down," he says. "Sometimes I'll record a track at minus 8 so I can further adjust it. The more space between the notes, you get more emphasis on each and more swing."

Spinning techno in the mecca of Berlin was a career moment for Converse, but it's the smaller, scrappier events that excite him the most. Parties like In Training (Cleve­land) and Honcho (Pittsburgh) were highlights of his busy touring schedule, and he's currently looking forward to a DIY show in Bozeman, Mont. As long as the sound is good, unconventional venues simply offer more energy. It's a mentality adopted by Austin's current wave of dance music promoters, who've eschewed Downtown clubs for unconventional spaces such as Mexican restaurants like Tamale House and art spaces including ATM Gallery.

"Here, parties are a joint effort that wouldn't happen except for everyone involved," acknowledges Converse. "The real estate boom that the city has had over the last 20 years has eaten up DIY spaces. There's so few left, we're hungry for it."

A version of this article appeared in print on October 20, 2017 with the headline: Roll With It