Playback: Lost in the Silent City

Crowdsourced sci-fi, getting steamy with Black Pistol Fire, and a mighty storm of music Why won't anybody tell me what the fuck is going on?

There's an ominous vibe permeating the underground venue and the half-dozen people I've asked about what to expect remain maddeningly tight-lipped. Even musician/KUTX personality Elizabeth McQueen, who attended a previous version of Silent City, resists my probing.

"You'll really have to wait and see," she says.

Suddenly a silver-spandexed humanoid, played by Raquel Bell, enters and passes out strange musical diagrams while the robotic voice of a supercomputer gives us our marching orders – something about how the musical tasks we complete power its functions. It sounds important.

We're then led into a separate room where resin lights hang overhead, projections hit the walls, and strange instruments are bolted to the floor. Colorful, glowing consoles handmade by co-director Wendy Mitchell trigger sounds, samples, and lights by sliding an angular card into various slots. Our silent host pulls us to stations and pantomimes instructions.

An experience equally enthralling and confounding, I begin to wonder how heavy is our hand in the continuity of this sci-fi narrative. Paranoia quickly sets in. Am I being subjected to a behavioral experiment examining how long participants will dutifully follow the charts? I decide that jazzing-out my sound and light contributions will better power the supercomputer and, quite possibly, save the world. My playing becomes increasingly manic, experimental, dire, unhinged!

Eventually the bot chirps out a final report, the soundtrack silences, and the crowd claps loudly. I turn around to see Crack Pipes singer Ray Colgan standing at a console, with a look of suspicion.

"When the computer was scanning and it said 'zero population' and the rocket exploded, I think they were trying to populate the Earth," he says. "You might have just killed off humanity."

Christ. Had I ruined the show by noodling beyond my designated parts?

"No, you were making it more enjoyable for everyone," Gurgiolo assured me the next day, revealing with a chuckle that several participants echoed my unsubstantiated social obedience experiment theory. "The show sounded totally different every time. We had more rowdy crowds who were being more playful and more conservative crowds who followed it closely.

"The enjoyment, for me, is when people go off script."

Kevin McKeown's neck hurts, an occupational hazard for the wiry frontman of Black Pistol Fire, whose stage ritual involves high-flying leaps off the bass drum of bandmate Eric Owen. Two Saturdays ago, capping an immolating set at Chicago's Riot Fest, the singer/guitarist barely executed an improbable crowd surf, vaulting eight feet to an island of speakers, then another eight feet into the audience. Who says white men can't jump? "I almost didn't make it, actually," exclaims McKeown through the haze of a steam room where he and Owen sit wrapped in towels. "The crowd pulled me in. Three days later, I woke up like, 'Holy fuck!' I even went to an osteopath."

"We wanted this record to feel a bit like a playlist," offers McKeown, now totally invisible in the fog. "Nowadays, that's all the rage with Spotify and Pandora, so you get up in the morning and put on a playlist, and you could be listening to folk, rap, R&B, soul, rock. I thought our record could be like that instead of everything sounding one way."

The Canadian buds, who reside in Texas on O-1 Visas designating them as "Aliens of Extraordinary Ability," christen Deadbeat Graffiti on Friday with a release show at Emo's. All profits benefit hurricane recovery efforts.

"It is in times of crisis that we see the power of our human spirit – FACT!" declared Matthew McConaughey Friday night at the Frank Erwin Center.

One organizer revealed to "Playback" that the Dixie Chicks almost played, but had scheduling conflicts. Undeterred, Maguire attended two nights of rehearsals and played fiddle throughout. Behind-the-scenes sightings included Paul Simon and Leon Bridges hitting it off with a long conversation in the hallway, Jimmie Vaughan giving Willie guitar pointers on how to play the ending of "Texas Flood," and Renée Zellweger hanging out with her old friend Pariah vocalist Dave Derrick.

Every Austin Record Convention I swear I'm only going to spend $100, then so many delectable LPs appear that I shell out double or triple that. Thus my bank account prepares to plummet down to double digits with the arrival of a rare fall iteration this weekend at the Palmer Events Center. Let me at it!

Throughout its 36-year history, the ARC has zigzagged between being an annual and semi-annual event. This is the first year in recent memory they've hosted a fall show – and it might be an outlier. ARC scion Nathan Hanners says that due to Austin's hypercompetitive fall event calendar, he can't guarantee another double dose of ARCs in 2018. Consider this one a bonus.

Hanners reveals that, despite a few dealers being affected by hurricanes, interest in a second convention has been high. While recent spring shows have set a record of 300 tables, he's got well over 250 dealers lined up for this weekend. Whether you're a rarities collector or a music fan looking for deals, "Playback" recommends laying down $40 for Friday's early-bird shopping. Otherwise it's $5 for Saturday and Sunday. 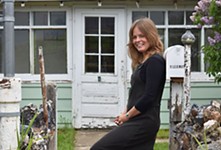 Christy Hays' Watershed Moment
One foot in Austin, one in Montana, the singer-songwriter jumps in with both on breakout River Swimmer