Playing like a mess of raw knuckles, bloody lips, and bruised, broken noses, the debut from Austin punks Plax seethes with wounded aggression. A restless thrashing that times out under a half-hour, Clean Feeling is predominantly confrontational. Victor Ziolkowski more often than not screams at a "you," his hoarse bark commonplace in the local quartet's sinister world, even-keeled and monotone in its combative consistency. Steely and unwavering, his narrator serves as a foothold as the instrumentation explodes into chaos around him.

No song here reaches the three-minute mark save for seven-minute closer "Mold," infusing the album with a brash, heightened intensity. Both "In a Web" and "Mistake" skew inward, the former riddled by anxiety and tangled in doubt, steered by a drumbeat like fists beating into your skull. "Mistake" wanders down the same path, getting one last fix for a chronicler who's self-aware enough to loathe himself while doing it. "Location" features truly brutal drumming courtesy of Marley Jones from OBN IIIs, while Spray Paint's Chris Stephenson brings signature unease to his angular guitar. OBN IIIs' Michael Goodwin totes thrumming, punching basslines.

On the pulsating "Black and White," a mere 50-second track bursting through the middle of the disc, the vocals remain steadfast in pacing, discernible and unrushed amidst a rapid, propulsive mania, which contrasts to "1x1" veering away from the breakneck pace of Clean Feeling, instead stopping and starting, slowly slogging forward as machinery beeps and whirrs to fill out the song.

"Each breath I take disappears," insists Ziolkowski as the tense, gritty guitars and buzzing slowly overtake his voice. 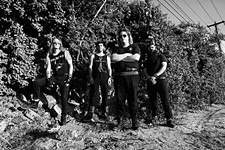