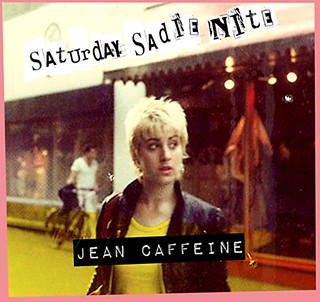 By the time Jean Caffeine arrived in mid-Eighties Austin to ignite her All-Nite Truck Stop, she'd already lived several musical lives. DJ at NYC's Danceteria in the age of Haring, drummer for Pulsallama alongside Ann Magnuson, the native New Yorker began it all on the opposite coast, embedded in San Francisco's incipient punk scene against the backdrop of the Sex Pistols' final performance at Winterland, Harvey Milk's assassination, and the White Night riots. If Caffeine (née Leider) didn't always reveal her first wave roots, Sadie Saturday Nite and its accompanying "one-womanish" show spell it out in vivid ransom note font. The title track, retooled from 2011's Geckos in the Elevator, perfectly encapsulates the honeymoon phase of discovering a tribe after wandering in adolescent wilderness. "All Girl Band" affectionately recounts nascent gigging with the Urge, including one show where Bill Murray up and left. Eschewing easy nostalgia, Caffeine's folk-infused storytelling captures both the heady and foreboding elements of Bay Area youthdom in the Summer of Hate. (CD release: Friday, Sept. 1, Hole in the Wall, 10pm, and Sunday, Sept. 3, in-store at Antone’s Records – with free Topo Chico!)