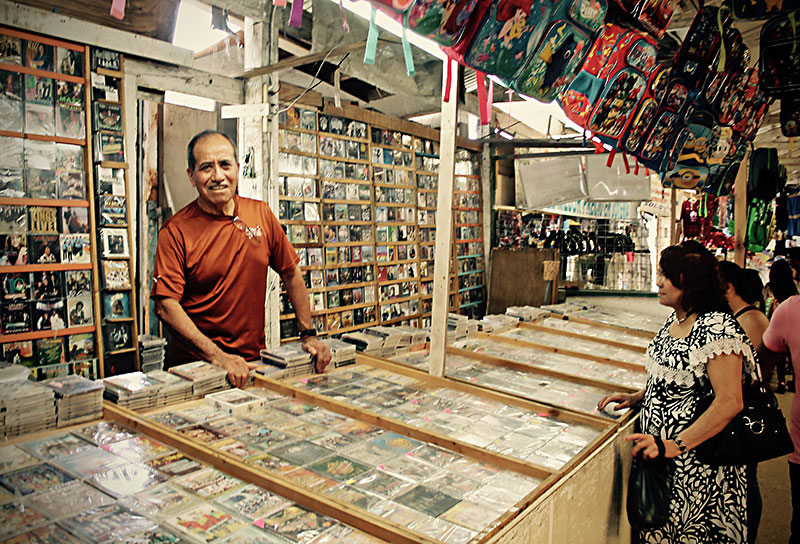 Here's a statistic that may shock you. There are more Latino record stores in Austin (discotecas) than Anglo record shops.

You'll find them in the strip malls of Latino business districts – East Riverside, North Lamar, Montopolis – often within striking distance of a piñata store. None exist in the city center. The Acapulco Video & Record Shop that once occupied a half-block on East Seventh near Chicon is now a mixed-used condo. Yet they remain Austin's most significant specialty stores.

Given that over 35% of our population identified as Latino or Hispanic in the last census, Latin culture is mainstream in Austin, so discotecas remain decidedly Mexican emporiums with no need to pander to white sensibilities. There's no vinyl, the clerks speak Spanish, and the closest thing to white music "Playback" found in his extensive shopping spree last week were a couple of Ricky Martin CDs.

Discoteca Sanchez is the Waterloo Records of Austin's Latin music retailers, boasting the largest selection of CDs in town amongst three locations. Last Friday afternoon, the south store (2223 Burton) was packed with 25 Mexican men in work boots, but none of them were looking for discs. They were cashing paychecks. Discotecas are also popular financial institutions.

That single, featuring Puerto Rican rapper Daddy Yankee and spawning remixes from Justin Bieber and Major Lazer, represents Latin music's momentum in American popular culture. It's the most listened to song of 2017 and the most streamed song of all time. The last Latin-American tune to top the Billboard 200 was "Macarena" 21 years ago, and I didn't see a single Los del Río CD in any discoteca.

"People come in here to buy jewelry or bus tickets, or to send money to Mexico, then they'll buy a CD while they're waiting," a clerk tells me. "But CD sales have dropped off because of streaming. It's more of an impulse buy now."

Discoteca Furia (2237-C E. Riverside) has a strong selection of Tejano music, including Texan breakouts Intocable, but most of the shop is dedicated to the Western-style suits those artists wear. Discoteca Latino (9304 N. Lamar) boasts huge selections of purses and Christ statues, and maintains an impressive stock of discs from artists popular with younger crowds like pop/bachata artist Prince Royce, pop/folk singer Natalia Lafourcade, and Shakira. A convenience store by any other name, Mi Pueblito Discoteca (9717 N. Lamar) keeps a largely empty rack of dusty CDs in the back corner that seems mostly symbolic.

These stores maintain a town-square mentality that the digital landscape made impossible for clearinghouses of English-speaking music. From phone cards to children's toys, food, and CDs, their offerings bring in the whole family. And other than stocking at least one CD by ranchera king Vicente Fernández – Mexico's Johnny Cash – there's just one other universal feature of Austin's discotecas: money transfer. Every shop helps Austinites send money home to their families.

"I was sending $200,000 every week to Mexico from my stores," reveals Jorge Espinosa, who owned five Acapulco Video & Record Shops from the mid-Eighties until the mid-Aughts when he closed them amidst the post-9/11 economic downturn.

While a wealth of local discotecas remain, he furthers that Austin's increasingly expensive real estate has contributed to a decline in Latin music retailers. That means Espinosa can be found every Saturday and Sunday at the Austin Country Flea Market on Highway 290, one of the most distinctly Latino gatherings in town, featuring almost exclusively Mexican vendors plus live cumbia, Norteño, and Tejano music under the pavilion. His booth is an immaculate collection of CDs and cassettes including widely recognizable acts like Flaco Jiménez, Freddy Fender, Selena, and veteran local crooner Ruben Ramos – plus a treasure trove of regional artists.

Espinosa acknowledges that piracy was rampant amongst Latin music fans last decade and, more recently, streaming has cut into sales, but he says Mexican nationals still enjoy CDs, which he sells for $14 and are divided by regions.

"Lots of people in Austin come from the south, Michoacán and Guerrero, and they like the music called calentana," he says, noting that Tejano is less popular among the market's largely immigrant customer base. "People from San Luis Potosí like Norteño. I don't sell too much reggaeton or bachata.

"They like it – that's the new music that just hits – but these guys will stay forever," concludes Espinosa, holding up a CD of Los Tigres del Norte, unequivocal gods of Norteño music for the last 40 years and his bestseller. "These are the classics."

Old Settler's Music Festival got the boot from Salt Lick Barbecue Pavilion in Driftwood, where the folk institution was held for 15 years, and will relocate to Dale, near Lockhart. Organizers had already purchased the larger 145-acre property in June and planned to transfer OSMF there in 2019, but were shocked to get a letter from Salt Lick owner Scott Roberts expressing concern that the festival could alienate new neighbors. Roberts has long planned to develop a portion of his family's land into residential parcels. The big upside to the new grounds, debuting in May, will be more space for OSMF's camping scene, which is known for extravagant campsite build-outs and spontaneous bluegrass pickin' sessions.

R.I.P. Kerri Luker, an unforgettable drummer who anchored Satan's favorite rockabilly act the Flametrick Subs, died last Thursday at 47, following a long fight with colon cancer. A charismatic drummer who, in the rockabilly tradition, stood while she played, the Denton native was known onstage as Miss Fortune, but will be remembered for her friendly, kindhearted presence.

Dale Watson relocates his Ameripolitan Music Awards from Austin to his second home of Memphis. The fifth-year event, which celebrates authentic roots artists and two years ago included a performance by Charley Pride, will take place in the Guest House at Graceland on Feb. 13.

Thor Harris announced his candidacy for Texas governor on Twitter last Friday with a video in which the charismatic percussionist, flanked by a rainbow flag, said, "Howdy, my name's Thor Harris, and I'm running for governor of Texas, 'cause fuck this." Earlier announced Democratic hopefuls Jeffrey Payne and Tom Wakely now have to contend with a nationally beloved multi-instrumentalist whose résumé includes Shearwater, Swans, and, currently, Adam Torres.

A version of this article appeared in print on August 18, 2017 with the headline: Digging Austin's Discotecas
More Playback columns