Kids in a New Groove, Bull McCabe's bows out, and underground heroes of Austin music 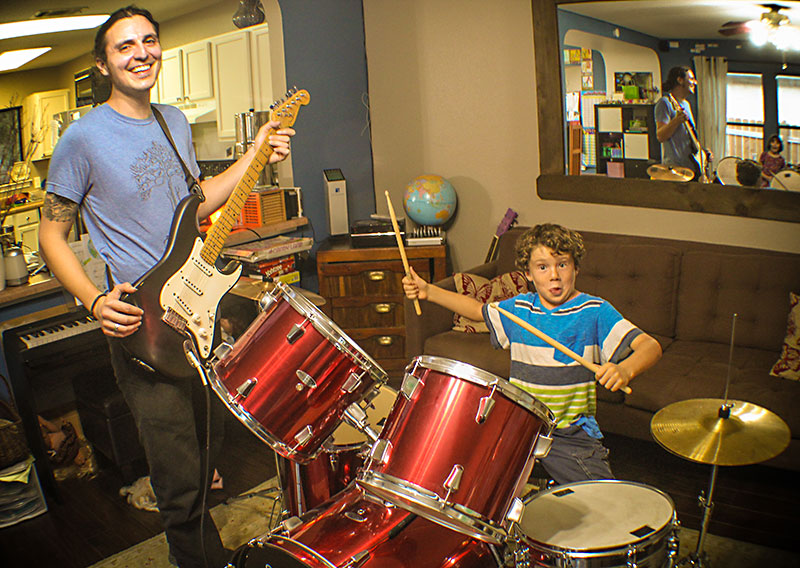 Angel's clarion call runs up and down a major scale, the vocal warm-up tapped out on a keyboard by her mentor Julie Fiore. Thursday evening in a commons room at the Settlement Home, a facility serving young girls who've suffered abuse, neglect, and emotional trauma, finds the 14-year-old expressing talent and confidence kids at haughty fine arts schools would kill for. Still, her weekly lessons with Austin music nonprofit Kids in a New Groove (KING) serve a very basic function: escape from the hectic world of foster care.

"The [Residential Treatment Center] is really crazy and hectic, you know – those girls," Angel rolls her eyes, motioning toward a nearby building from which a cacophony of puerile voices emanates. "It's really nice to have a retreat from all that and just be in your mind with the music. You don't have to think about all the other stuff."

As the lesson unfolds, Fiore, a local opera iconoclast and graduate of University of North Texas' prestigious music program, asks her student to sing something she holds a personal connection with. Angel chooses "Remembering Sunday" by All Time Low.

"My teaching's changed significantly during my time at KING," admits Fiore, now in her fourth year of volunteering. "When I started I thought I had to adhere to strict principles. Now the students let me know what they need. There are some weeks when I see these girls and we just talk – never sing a lick of music."

One of KING's most devoted mentors, multi-instrumentalist Mike Hidalgo, joined from the underground rock scene as drummer in electro-punk act Obsolete Machines and a touring tech for One-Eyed Doll. Even so, he says his most inspiring collaborator is an 8-year-old boy named Jachin. Last Sunday, as they have weekly for the past three years, the two jammed in the living room of the Cohee family, once Jachin's foster family, now his legal guardians.

Jachin flashed a broad, continuous smile while pounding out a sturdy 4/4 beat with natural feel. Though the drummer endured a neglectful upbringing, his mentor has witnessed the youth's self-confidence grow. After they performed together at the North Door for KING's quarterly concert series a couple years back, the first thing Jachin said was, "When can we do that again?"

Says Hidalgo: "One of the things I tell students is, 'If you're ever feeling mad, sad, or bad, music is a good way to express that emotion, then move through it, and create something that will make others feel better.' These kids have a lot of pain from things they've gone through and it's going to come out in some kind of way. I think the best way it can come out is with music."

Travis Cohee, adoptive father to Jachin and his two younger siblings, says KING has been invaluable to their journey as a family.

"I'm a musician too, and it's a blessing to see my son expressing himself through music," he said. "Mike and Jachin's relationship is amazing. We consider Mike part of our family."

Running of the Bulls

Pints stop pouring at Bull McCabe's at the end of the month. After 18 years, the Red River pub's socially explosive chieftains, Dubliners Gerry Langan and Johnny Maginnis, are going out on their own terms.

"It was a good business decision for me and my brother," says Maginnis, revealing that their assets have been sold to Side Bar owner Trey Spaw. As for what would become of the space, Maginnis expressed confidence in the new owner's tastes, saying, "No cheesy bar will work on Red River."

The closure marks the end of an era for the west side of Red River's 700 block, once housing three music venues in Headhunters, Room 710, and Bull McCabe's. The latter's corner stage was a popular platform for street punk and Oi! bands (revisit "Don't Call It Street Punk," Feb. 5, 2016), including Brewtality Inc. and Sniper 66, as well as evil country (Candler Wilkinson), and occasional thrash (M.O.D.). From here on out, the owners plan a curtain call of their favorite bands.

"It's gonna be like Woodstock for us," exclaims Maginnis. "We're gonna pack this place and send it off the way it deserves!"

Since overtaking unremarkable Eastside dive the Frontier Bar in 2013, the Lost Well has flourished as a homegrown hub for metal, D-beat, doom, and grind – counting heavies like Krigblast, Weak Flesh, Widower, Blood Royale, Clit Eastwood, and Hexist as house bands.

"The local scene has definitely helped us," acknowledges owner Marcello Murphy. "Part of that is we don't take any of the door money and we pay for the sound guy and door staffing. Our thought is that our job is to sell booze, the bands make what they bring in, and we coexist together."

"It's shaky, but it's good – I'm a skater," painter Tim Kerr hollered down from a wobbly skyjack on Monday. The local punk icon's ongoing street art collaboration with writer/historian Michael Corcoran reaches peak potency this week with a 50x20 ft. mural on the north wall of Stubb's, depicting early, forgotten greats of Austin music. Kerr, eager to widen the narrative of Austin's musical history, is thankful he's not painting a giant Stevie Ray Vaughan. Get to know these faces:

Ernie Mae Miller: jazz pianist and vocalist whose epic career extended from Austin to the Apollo.

Gilbert Askey: trumpeter with jazz giants and architect of the Motown sound.

Camilo Cantú: Austin's accordion-squeezing conjunto king of the Thirties through the Sixties.