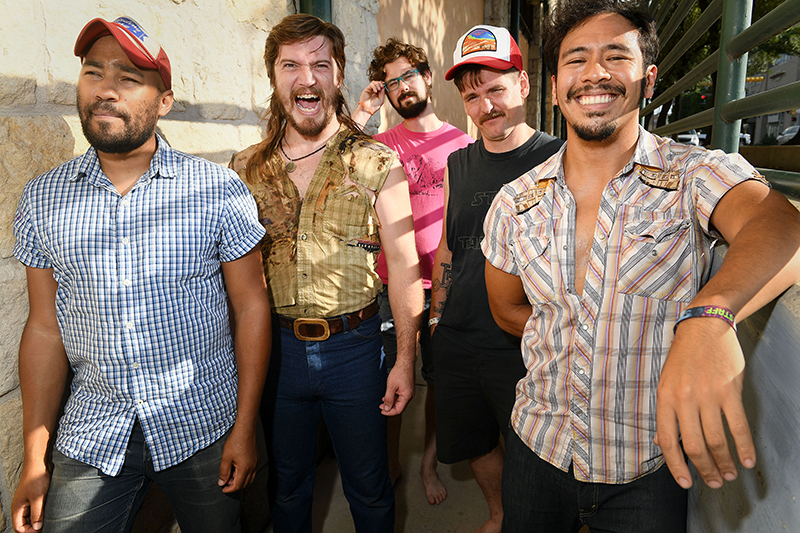 So much for their plan of "maximum music, no banter." Whiskey Shivers' in-store performance last Thursday at Waterloo Records instead delivered the usual boisterous, stink-footed revelry that makes them a mainstay Austin live act.

Blame guitarist Jeff "Horti" Hortillosa, who falsely claimed that new anthem "Livin' on the Run" was written by Solange Knowles before prefacing a tender cover of "True Love Will Find You in the End" with a crack about them being a Daniel Johnston cover band named How High Are You? Fiddler Bobby Fitzgerald, ever sleeveless, mulleted, and outfitted in a pair of painted-on Wranglers, also proved guilty, interrupting the proceedings to invite a 100-strong afternoon crowd – which included dancing children, hippies, punks, normals, and at least one twitchy dog – to all come swimming at Barton Springs after the show.

That's not the local quintet's only splash, either. They've landed significant roles in the third installment of the lucrative Pitch Perfect film series, now scheduled for the holidays, and just last week, the Shivers spent several nights tracking with rapper Trinidad James, famous for co-conspiring megahit "Uptown Funk." Meanwhile, the unconventional string band, reminding old-school Austinites of local punkgrass legacies the Bad Livers, have secured a tour with guitar phenom Billy Strings, one of the hottest names in bluegrass.

Of course, the band's most momentous manifestation of late is Some Part of Something, their first album in three years. The opening cut, a teardown of traditional mountain song "Cluck Ol' Hen," rides a pounding beat that flagrantly violates bluegrass' cardinal rule: no drums.

"It's never been more clear that we're not a bluegrass band," shrugged banjoist James Bookert, moments before taking the stage at Waterloo. "I'm stoked on that."

While traces of their trademark "thrashgrass" remain, the Chris "Frenchie" Smith-produced disc breaks Whiskey Shivers out of their mold. As such, it's a versatile work spanning pop, punk, folk, country, modern covers, and old-timey tunes that divides out the highlights amongst four lead singers. A group comprised of genuinely individualistic characters here coalesces its strongest track list over the course of five albums.

In the spirit, "Playback" screamed "Fuck You!" at the band during their set, garnering disapproving looks from those who didn't realize it was a request for the Bookert-sung breakup song that constitutes the new album's most gleeful pop nugget. They obliged, swaying in unison before then tearing into a bluegrass-averse version of the Cure's "Friday I'm in Love," followed by torrential traditional "Rollin' in My Sweet Baby's Arms," commonplace covers, but never ones performed back-to-back by the same musician – unless you're the Whiskey Shivers.

Some Part of Something arrives Friday. On Saturday, Whiskey Shivers kick off their shoes at Mohawk's outside stage with the Deer and Sour Bridges.

The Casualties have called upon Austin's David Rodriguez, the mohawked frontman who spent the last 17 years stage-diving in local punk cornerstones Krum Bums and now the Starving Wolves, to handle vocal duties following the departure of their original singer Jorge Herrera. Rodriguez, a kinetic presence compared to the stoic Herrera, thinks his performance style will mesh with NYC's street punk heroes.

"That's the thing about the Casualties; they're a band with the crowd," says Rodriguez. "I'm a huge Austin [booster] and Austin is a very incestuous, in-your-face kind of city with music, so when I sing, I like to play with the crowd and make it a whole family affair. I think that's also the Casualties' feel, so we're going to have a real good time doing that."

Rodriguez, aka Dave Tejas, has been a close friend and frequent tourmate of the Casualties since the late Nineties. In the wake of Hererra's sudden exit, they asked Rodriguez to fill in at Fuck You We Rule OK! fest in Tulsa this month and liked the results enough to keep him on for two months of touring in Europe and the U.S. – including major festivals and a local date at Mohawk Aug. 31.

The Butthole Surfers are working on a new album. This shocking, arousing, and joyous revelation came to light last week at, of all places, an Austin Music Commission meeting. Veteran Austin engineer/producer Stuart Sullivan, newly appointed to City Council's music advisory board, gave a cursory rundown of his résumé when he off-handedly mentioned he was about to record with his longtime muses the Butthole Surfers.

Fortunately, none of the meeting's 14 attendees reacted to "Playback" shitting his pants with excitement over the Austinites' first record in 16 years. Days later, Butthole Surfers' guitarist/co-founder Paul Leary confirmed the project and that Sullivan would be doing some work on it, but didn't elaborate further.

The prospective work would be the Surfers' ninth studio long-player, their last outing being 2001's Weird Revolution, which prominently featured programmed drumming and a raplike delivery from frontman Gibby Haynes. The crucial lineup of Haynes, Leary, drummer King Coffey, and bassist Jeff Pinkus played Houston's Day for Night festival last December. Their lone 2017 booking, in the UK for April's Safe as Milk Festival, was abruptly canceled due to the event's low ticket sales.

"Today's 'fake news' phenomenon is so in sync with Orwell's ideas of the 'memory hole,' 'Newspeak,' and 'doublethink,'" notes Halverson. "You can't help but think of those concepts today."

"It's dystopian versus new-hope-ian," assesses Halverson of the production, taking place Friday, 8pm, at mysterious Eastside art space Museum of Human Achievement. "The 1984 stuff will take you out into drone-land with vintage synths and tables of stomp boxes. Then, Grapes of Wrath material brings you back to the earth with dobros and foot-stomping." 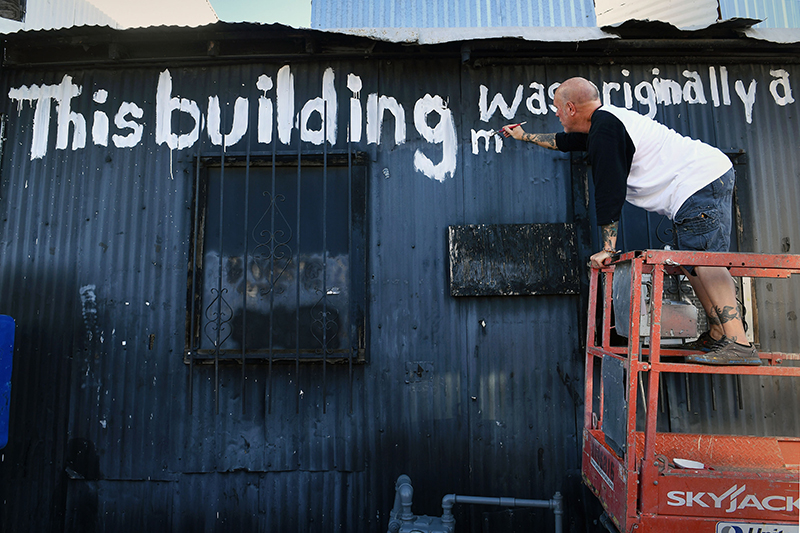 A new word mural on the side of Elysium illuminates the untold history of Red River. Written by superscribe Michael Corcoran and visualized by punk painter Tim Kerr, the sanctioned street art adds racial, cultural, and musical perspective to the entertainment district. The Big Boys/Poison 13 guitarist installed the epic text during last weekend's Hot Summer Nights, a free concert series that successfully stimulated club business during the summer slump. Red River's Merchants Association and business district incubator Soul-y Austin will continue to roll out improvements including several additional murals, a neon sign welcoming visitors, and cleaning up the scary alley between Beerland and Sidewinder.