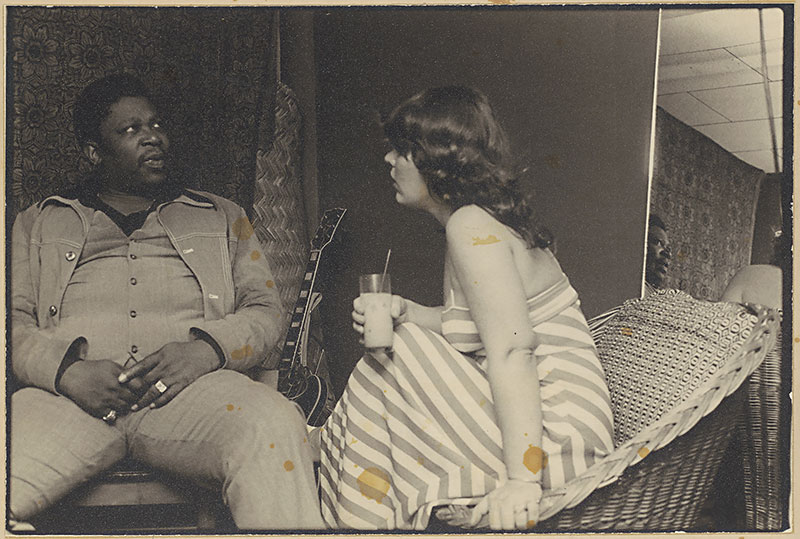 Margaret Moser and B.B. King 41 years ago this week – July 4, 1976 – backstage at Antone's when the club resided at Sixth and Brazos (Photo by Steve Salibo)

"It's been keeping me up at night since last October," Zach Ernst reveals of his musical obsession, the Antone's anniversary poster. "It's something you have to put together with a lot of care and love."

For the young protégé of Clifford Antone, who's now booked Austin's "Home of the Blues" since it reopened Downtown a year-and-a-half ago, the names listed on the anniversary series announcement must represent the sound of the club year-round – blues, soul, swamp pop, rock – while exalting genre forefathers. The measuring stick for his 42nd anniversary artist bill, depicting recently departed local harmonica legend James Cotton and zydeco king Clifton Chenier lording over 55 hand-picked acts, are stacks of ancient anniversary posters in which Clifford crammed in as many blues heroes as could fit on an 11"x17" print.

There couldn't be too many names on an Antone's anniversary poster.

"No. Never," says sister Susan Antone. "Clifford never thought it was too many people. For Cliff, honoring all these great people was his life, and he had a talent for making big shows with all of them."

Though Robert Johnson had been dead for 37 years by the time Antone's opened in 1975, the delta bluesman has put in anniversary appearances. One of his two existing images graced the 15th anniversary poster, and Buddy Guy performed his song "Sweet Home Chicago" as part of the club's 20-year celebration and corresponding live release. He'll be here again on Saturday, when Chronicle queen Margaret Moser – suddenly a burgeoning national celebrity after her career and current bout with terminal cancer was chronicled in an NPR story by this issue's chorus contributor Joe Nick Patoski – stages the new exhibit, "Robert Johnson in Texas 1936 & 1937," upstairs at Antone's on Saturday at 5pm. The material will remain up throughout the anniversary.

Johnson, a traveling guitarist who sang about ramblin', the devil, and women, remains one of the most mysterious figures in 20th century music, with even the most elemental details of his life clouded in confusion and contradiction.

Widely believed to have been born on May 8, 1911, in Hazlehurst, Miss., various records from Johnson's school, marriage licenses, and death certificate mark his birth at various points between 1907 and 1912. More exactly documented is his death date: August 16, 1938, following three days of bleeding out of the mouth, and – according to friends – "crawling along the ground on all fours, barking and snapping like a mad beast" in a boarding house near Greenwood. Why Johnson died remains unclear: poisoned whiskey from a jealous husband and congenital syphilis rank amongst the popular theories.

Like 19th century Italian violin virtuoso Niccolò Paganini, Johnson is said to have acquired preternatural instrumental skills by signing away his soul to the prince of darkness. That story, "confirmed" by fellow Mississippi bluesman Son House, originates from a long sojourn away from Robinsonville, Miss., after which Johnson progressed from driving patrons out of juke joints to boasting incredible guitar talent. For what it's worth, House reported that the devil was a large black man who tunes your guitar for you at the crossroads at night.

What occurred in the two years before Johnson's death is what most interests Moser, who focused her research on his time in the Lone Star State. All 29 of his recorded songs were tracked in Texas with American Record Corporation exec Don Law – 16 at a San Antonio hotel (likely the Gunter, but Moser explores the possibility of it being the Bluebonnet) in November 1936, and 13 more the next May in Dallas.

Then, there's an amazing piece of history Moser unearthed. Did Johnson write a 30th song with a 6-year-old girl between his two recording sessions? Shirley Ratisseau, a white blues singer and writer who sang at Austin's black clubs in the Fifties and was so revered that blues great Albert Collins used to utter "Where's Shirley?" into the microphone at Antone's, claimed Johnson ventured down to her parents' fishing camp in Rockport (revisit "The Girl Who Met Robert Johnson," Aug. 3, 2012).

Ratisseau remembered taking a "sickly" young man fishing, where they composed the song "Fishin'," which her mother transcribed, including the lines: "If you need a friend, I will be one [Robert]/ If you need another friend, it's me! [Shirley]/ All together we are three! Shirley, Robert, and the little fishie."

Though it's disputed, Moser prefers to believe the tale, telling "Playback" that the "elements seem as likely as unlikely."

"I am fascinated by the fascination on Robert Johnson," offers Moser, who sees the exhibit as a culmination of her five decades in journalism. "That a talented singer and songwriter, who lay dead and forgotten for more than 20 years and left a matchless legacy of 29 songs as the face of a style he neither invented nor necessarily was the greatest at, became arguably the most influential guitarist of my generation.

"We're not even talking about the crossroads myth or deals with the devil, just a young man driven by musical force in his soul and a need to let the world hear it, too."

Dream Machine, Austin's psychedelic riff rock band fronted by Matthew Melton – of Warm Soda – and his Bosnian wife Doris, were promptly dropped by Thee Oh Sees-affiliated Castle Face Records last week after the singers professed coldly conservative views on immigration and feminism in an interview with French webzine Still in Rock. The Meltons also promoted their plan to relocate to Amsterdam where they would expand their photo booth business, currently in place at several local venues. In related news, a photo booth inside Hotel Vegas was destroyed by an unknown vandal Friday night.

Check This Action, the LeRoi Brothers' long-out-of-print 1983 album, has been re-pressed on vinyl by Jungle Records. This absolutely essential slab of high-energy, rootsy garage rock – featuring Keith Ferguson on bass – can be copped at Antone's Records, co-owned by LeRoi drummer Mike Buck. 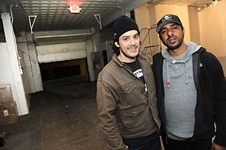