John Darnielle isn't known for feel-good book narratives, but as the brains behind lit rockers the Mountain Goats, the singer transforms songs about decaying marriages, addiction, and domestic violence into sing-alongs. Similarly, Universal Harvester – the very antithesis to standard summer reading – belongs at the beach even though there's nothing light, summery, or carefree about the follow-up to Darnielle's acclaimed 2014 debut novel Wolf in White Van. The author's careful construction of mystery and suspense mute the fact that sand between your toes and landlocked Iowa coexist easily here. That's where Darnielle plunks readers, in the hands of Jeremy, a video store clerk who, along with his father, copes with the loss of his mother, loneliness, and small-town stillness. The plot builds around a complaint that bizarre and inexplicable clips are being spliced into movie rentals. Jeremy, his dad, and a curious customer investigate, but the beauty of Universal Harvester isn't in the answers so much as their backstory across four sections, three generations, and several geographic locations. Darnielle's multiple plotlines connect parallels and associations that reach across time in masterful fashion, all of it ultimately connected by a pervasive sense of isolation. If that doesn't sound like a page turner, trust me – and trust Darnielle – it is. 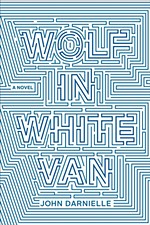