Playback: You Can’t Put Your Arms Around a Memory

But you can still put your arms around Margaret Moser 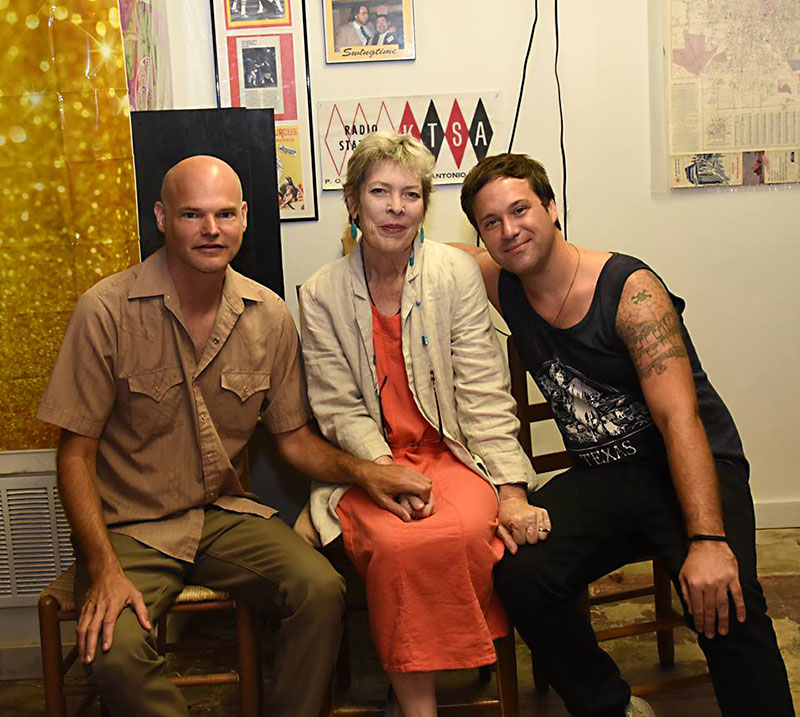 You never know the last time you'll see your friends alive. Death mostly adheres to an unknown time table, which is why you always take the trip – make the most of every moment – and never hold back your love and gratitude.

As we raced to San Antonio last Sunday, three full-time Austin music men exchanged origin stories in my band van. Each of us permeated the local scene in different decades, yet our lives shared a common booster: Margaret Moser. Singer/sound man/booker Paul Minor began under her wing in 1981 when he served the Chronicle's first internship. Rocker/writer Tim Stegall considers Moser his mother after 25 years of guidance and support.

Me? Well, Margaret Moser made my dreams come true when she plucked me out of Planet K to become a music journalist.

There are hundreds of others like us – musicians, writers, fans, and industry folks – who've had doors opened for them by the Chronicle scribe and Austin Music Awards director, who retired in 2014 after 33 years of service. She doesn't merely connect with people. She champions them and passes on their stories. As such, Austin holds a special reverence for Margaret Moser, whose name remains synonymous with the city's music scene.

If you've noticed her profile trending lately, it's because the public now knows that she isn't going to live as long as she deserves. After thriving despite stage IV colon cancer for the last three-and-a-half years, the 63-year-old Chicago native has entered home hospice. The tidal wave of love that's since engulfed her now overflows with public parties at her South Texas Popular Culture Center, part of a graceful outro that also includes producing a traveling exhibit on delta bluesman Robert Johnson's Texas history, arriving locally at Antone's on July 1.

Last weekend's love-in at Tex Pop saw generations of musicians, writers, and friends worshipping at the altar of Moser. Accompanied by her rock, husband Steve Chaney, she posed for 1,000 pictures, soaked in Stegall's touching performance of Johnny Thunders' "You Can't Put Your Arms Around a Memory," and fawned over Oliver Gray, toddler son of another writer she helped raise: Chris Gray, who wrote this page, then called "TCB," from 2003-07. Of course, Moser founded the Chronicle's music news column, initially called "In One Ear," in 1981 when the paper began. As far as I'm concerned, it's still her page. I'm just keeping it warm.

Until she squeezed my hand on Sunday, I'd been in denial about my mentor dying. After all, just seven months ago she'd merrily hopped on the back of my scooter on the way to a post-show toke following Buddy Guy's performance at Antone's. I wrote to her last week hypothesizing that the outpouring of love she's gotten was going to give her superpowers to survive another few years.

"There's much I fear about what's ahead with pain, but the unholy amount of love and warmth I am getting these days is fantastic, and to bask in it with all my friends and loved ones, getting to revisit the past, and do all this shit – fuck, Kevin, it's pretty great," she replied, adding that death had become her accepted companion while writing frequent obituaries in recent years. "I am at peace with leaving the party early, because I never really stayed late. I just wish I didn't have to leave Steve."

I cry every time I read that.

Eighty minutes into Sunday's hangout, the celebrant apologized that she was "fading very, very fast right now" and left early.

Needing to talk to a priest, I returned to Austin and immediately swung by the Northside Iron Cactus, where Reverend Merrill Wade of Saint Matthew's Episcopal Church hosts his weekly Soul of a Musician Series, featuring artists performing/discussing their songs. Wade consoled me, explaining that it's a primitive human experience to see your elders pass.

Serendipitously, that night's event touched on another elder's passing. Renowned bassist and producer George Reiff, who died last month from cancer complications at age 56, was a friend of Wade's and had been booked to perform at the Soul Series that night. He had planned to lead a group of guest songwriters as a way to thank all of his friends and fans who had supported him during his battle with illness. When Reiff's health took a nosedive, his onetime band Cotton Mather, fronted by friend Robert Harrison, took over the gig as a dedication.

"I'm going from grief to gratitude," offered Harrison amid an incredible set of lyrically inclined power-pop, largely pulling from recent comeback albums Wild Kingdom and Death of the Cool. "He was the best friend you could have and one of the greatest bass players in captivity."

After a 90-minute performance loaded with lighthearted Reiff anecdotes, the full house stood up from their tables and gathered around the stage for a sing-along of "Let It Be," written by Reiff's childhood bass inspiration Paul McCartney. That hymnlike Beatles song brought one woman to tears. For me, it ushered in an emotional Zen. I remembered McCartney wrote it after his long-deceased mother visited him in a dream, bringing him inner peace and reassurance.

That reminded me that the people you love never leave you.

Mayor Steve Adler tells "Playback" there's still momentum behind Agent of Change and would like to see it go to Council in August. That legislation, along with changes to Outdoor Music Venue requirements and city code regarding sound ordinances, has been removed from today's (Thursday) Council agenda following outcry from music advocates that the Economic Development Department hadn't included stakeholder feedback in their recent redraft. For Adler, Agent of Change remains an immediate and attainable priority, while entertainment licenses and changes to sound code can fall into a longer time frame. Adler didn't specify who'd be contributing to forthcoming legislation rewrites, but urged for the inclusion of a wide swath of the music community: "If you do these things without inviting everyone to the table, it will end up biting you on the butt later on." More with Adler on our Daily Music page.

Jay Moeller, Eve Monsees, and Austin's Pizza's JD Torian have organized a monthly Third Sunday Block Party on Guadalupe and 29th. The shindig begins at 2pm with a music gear swap meet at Austin's Pizza in the old Tom's Tabooley, followed by a 3pm Antone's Records in-store with doom twangers Chili Cold Blood, and a 4:30pm performance by the Jay Moeller Band with special guests at Austin's Pizza.