In 20th century songbooks, including those popular paperbacks on Hank Williams and Roy Orbison cranked out by the Acuff-Rose Music publishing empire, you were lucky to get six pictures thrown in amongst pages of lyrics, chords, and notes. Comparatively, this thick, full-color, gorgeously laid out offering from John Prine's label confuses "scrapbook" and "songbook" with wonderful results. "He's about as entertaining as a dog bite," reads one clipping from The Washington Star, in which nightlife commentator John Segraves compares the Chicago folk singer's voice to "poor quality sandpaper." Another scan of yellowed newsprint, opposite tablature for 1973 grinner "Dear Abby," finds the titular columnist, Abigail Van Buren, being fooled by a Prine fan who sends in a verse from the song and receives actual advice. Personal photos, coffee-stained lyric scribbles, profoundly funny insights, and numerous pictures of "Paradise" accompany the 65 songs notated in Beyond Words. "Fish and Whistle" flips to a photograph of his overall-clad father dangling a big ol' catfish, while the following spread depicts Skip's hamburger stand, where a young Prine was hired on at "50-cents an hour" to "scrub a parking lot" free of spilled custard before being terminated "for being scared of bees." In fact, Beyond Words functions foremost as impetus to sing Prine's emotive "Angel From Montgomery," potent aging doctrine "Hello in There," and anti-war wisecrack "Your Flag Decal Won't Get You Into Heaven Anymore." There's chords, too, but – spoiler alert – they're all in 1-4-5. 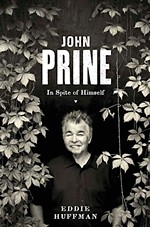 John Prine, In Spite of Himself
Unauthorized bio isn't even helped by its own subject