A complete detachment from the original vision of the Omnibus 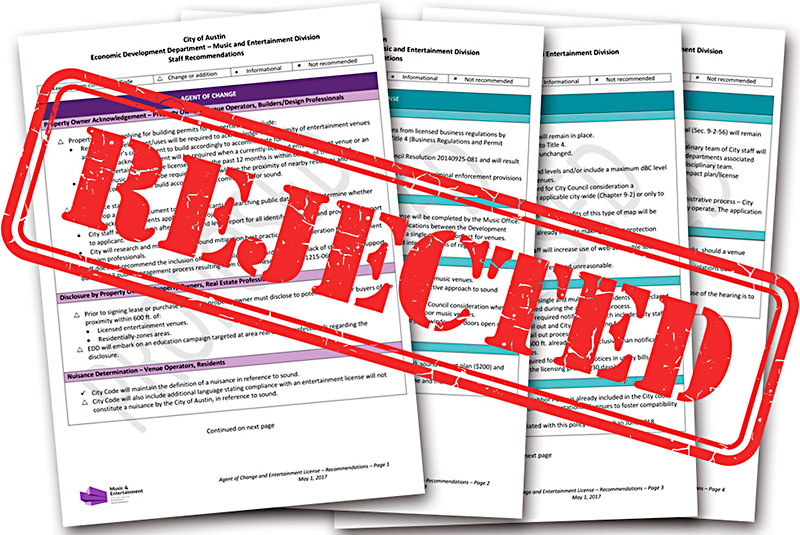 Eleven months after the unveiling of Mayor Adler's much ballyhooed Omnibus Resolution, my expectations for the City of Austin to create venue-friendly policy have eroded from "This is a unique opportunity for positive change" to "Please just don't make it worse." The Economic Development Department's recently unveiled presentation on Agent of Change policy and the creation of an Entertainment License for clubs are equally disappointing and dangerous, demonstrating a complete detachment from the original vision of the Omnibus' regulatory recommendations: preserving and stabilizing live music venues.

As the guy who's been proselytizing for Austin to adopt Agent of Change since 2015, I'm embarrassed to see the way it's emerged from the meat grinder of policy planning. The precept is intended to prevent and resolve issues between music venues and residential developments in disputes over sound by holding the new party responsible for adapting to the existing party. If an apartment complex gets built next to an existing concert hall, the developer must pay for appropriate sound insulation – and vice versa.

As it currently reads, the City's Agent of Change proposal doesn't call for the rule to be applied to hotels – an astonishing omission given that hotels have been the major source of sound enforcement friction. In fall 2015, I authored an investigative report on the Downtown Westin hotel, discovering that developers skimped on soundproofing during construction, botched the retrofitting of sound insulation, and management was routinely calling the police on nearby dance club the Nook, which was largely operating within the legal decibel range. A year later, the Westin sued the Nook.

That hotels receive immunity comes as no surprise: The City reaps revenue off Austin's 9% hotel tax rate, but this hall pass from accountability perpetuates the mismatch of high-rises vs. small businesses. Agent of Change legislation needs application anywhere there's overnight lodging. Anything less is defective. It could also use language with teeth. Staff recommendations don't call for building standards on projects within 600 feet of licensed music venues, but rather "acknowledgment" when applying for permits.

Acknowledgment won't work. If Donald Trump were to develop luxury high-rise apartments in the Red River Cultural District, do you trust he'd spend the extra money to insulate for the volume of surrounding nightlife, or would he build it in a way to financially benefit his business and investors, then sue the venues? And while the Agent of Change draft arrives as a limp and incomplete version of well-intentioned policy, the accompanying proposal of creating an Entertainment License for music venues comes off as punishment.

Intended to streamline the permit process for businesses that feature amplified outdoor music, the proposal calls for moving sound permitting from Title 9 (prohibited activities) to Title 4 (business regulations) in the city code. That's a welcome change, but it highlights uneven standards where music venues remain the redheaded stepchild of Austin small business. Staff fails to recommend changing the requirement of venues having to mail out notifications of their existence to neighbors within 600 feet when applying for the biannual license. No other Title 4 business in Austin must send neighbors invitations to complain apart from their opening. It's tantamount to making music venues wear the proverbial scarlet letter.

Additionally, the onus of permitting and mail-out would now fall on venues that have never had them before, since the draft redefines "outdoor music venue" as any club hosting amplified music with a window or door propped open. That's almost every last venue in Austin.

While the proposal would marginally improve the renewal process for outdoor music venues and potentially save operators hundreds of dollars annually, the Entertainment License isn't the deal it was originally made out to be. The Omnibus Report envisioned the license as a way to encourage businesses to host live music by tying it in with potential incentives including energy rebates, extended load-card hours, and a kickback from the city's portion of the mixed beverage tax. None of those rewards are included in the draft.

I'm concerned this month's series of stakeholder meetings taking input on the two initiatives are more procedural than influential. At a similar event last July at the Palm Door, venue owners expressed concerns that the Entertainment License would spell meaningless over-regulation if not tied to specific incentives. The meeting's moderator, Don Pitts – who retired this spring – agreed that the integrity of the license hinged on it being rewarding for good actors, rather than punitive.

So is the city even listening? For the last year and a half, venue owners demonstrated unprecedented engagement with the powers that be, drowning in meetings instead of focusing on their businesses. This policy draft indicates that the city has so far only paid lip service to club reps. After a policy draft that relieves no uncertainly from their existence, whether club operators remain engaged will be a measure of their patience.

As the first Omnibus recommendations stumble toward the dais – a City Council vote could happen in June – it's imperative they arrive as policies that core constituents can stand behind. Agent of Change must hold hotels accountable, and the Entertainment License needs to include significant incentives for upstanding venues. Without those revisions, eroding music community support will suck all the wind out of the Omnibus' sails – leaving only hot air.

Doris Miller Auditorium, the historic Rosewood Avenue event space/gymnasium where famed Eastside deejay and promoter Elmer Akins put major gospel acts in the early Fifties before it became a popular venue for prominent black artists (Little Richard, Ike & Tina Turner), psychedelic rockers (13th Floor Elevators, Conqueroo), and homegrown hip-hop talent, is gearing up again as a music center. Austin's Parks and Recreation Department has partnered with national nonprofit Notes for Notes and opened a studio and music education program for area youth there, while working to utilize the 350-plus-capacity space for concerts, according to reports.

Michael Corcoran, who wrote this page in the Eighties when it was called "Don't You Start Me Talking," has authored a majorly expanded version of his 2005 history book All Over the Map: True Heroes of Texas Music – review forthcoming (I'm still on page 1). Through 42 profiles, the-artist-formerly-known-as-Corky excavates the essential Lone Stars of blues, rap, Tejano, rock, Western swing, and punk. The local music scribe emeritus slangs signed copies at Midnight Monkey in Smithville (hometown of DJ Screw, as the book points out) from 2-4pm on Saturday, and is plotting a Juneteenth book-release show at Continental Club featuring the debut of Shawn y Ribs: Shawn Sahm and Shinyribs maestro Kevin Russell singing Doug Sahm tunes.

State Reppin': Marcia Ball has been named the 2018 Texas State Musician by Texas Commission on the Arts. The blues/boogie-woogie/R&B pianist and vocalist, who moved to Austin in 1970 and made a name for herself with Freda & the Firedogs before embarking on an epic solo career, succeeds George Strait – who was honored with the 2017 State Musician accolade. Unfortunately, State Musicians do not have congressional voting power.