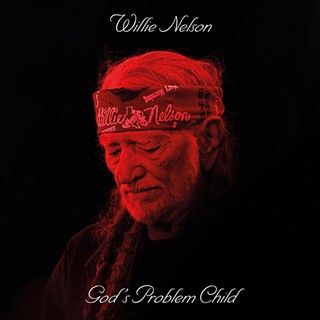 Incredibly, for a future outlaw whose first rodeo occurred in 1962 with song pitch ...And Then I Wrote ("Hello Walls," "Night Life," "Crazy"), the closest Willie Nelson ever came to a fallow period over the course of between five and six dozen studio LPs is the Eighties. Bad decade for everyone save for dictators and hairstylists. While modern Austin's founding father rode a strong first decade to this new millennium, he's setting a pace in the second for a late-career golden age. 2014's all-star Band of Brothers, 2015's Django & Jimmie with Merle Haggard, and last year's Summertime: Willie Nelson Sings Gershwin slot in among career capstones Highwayman, Pancho & Lefty, and Stardust, respectively. God's Problem Child, arriving the day before Nelson's 84th birthday (April 29), suffers somewhat in the afterburn of the former album grouping, but half its yield belongs on your hard drive. Birthday boy's almost imperceptibly thicker of the tongue on spry opener "Little House on the Hill" and maybe by design on the succeeding "Old Timer," a thematic pacesetter for God's Problem Child: "One by one, your friends have crossed over/ You pray for mercy and a few more days/ You still got dreams inside your head/ But some days it's a struggle just to get out of bed." Sister Bobbie Nelson, 86, and Mickey Raphael, 65, console with their opening piano/harp sunset. Another Old Fashioned, "Your Memory Has a Mind of Its Own," also mashes up Bobbie (sugar) and Raphael (bitters) then adds whiskey (Willie), the whole cocktail a gentle homage (cough) to Butch Hancock's "My Mind's Got a Mind of Its Own." What some call novelties, "Roll Me Up and Smoke Me When I Die" from 2012's Heroes and Willie-n-Merle joint venture "It's All Going to Pot," spin bona fide hits and live set staples, so here they're joined by "Still Not Dead," a riff off "On the Road Again" ("I run up and down the road making music as I go"). Better is "Delete and Fast Forward," as jaunty a digital age world-ender as country music ever produced ("When we blow the whole world back to where it began, just delete and fast forward again"), composed by the Texan and his Tennessee producer and songwriting crony Buddy Cannon. The pair breezes seven co-writes for God following multiple peak projects over the last decade, including all three recent catalog standouts. Cannon's commercial triumphs with George Strait and Kenny Chesney go back another couple of decades. Autumnal pledges ("True Love," "A Woman's Love") slow to a siesta ("Butterfly"), and the final third of the disc hits a tempo rut, though some such selections are ripe for rearrangement and reinterpretation, particularly the lilting gospel twang of "I Made a Mistake" ("I thought I was wrong"). Gary Nicholson's Hag tribute "He Won't Ever Be Gone" will disarm genre vets, while the funereal title track revisits the mic scrums on Heroes in colluding co-authors Jamey Johnson, Tony Joe White, and the late Leon Russell on one of his last vocalizations. Lord have mercy.