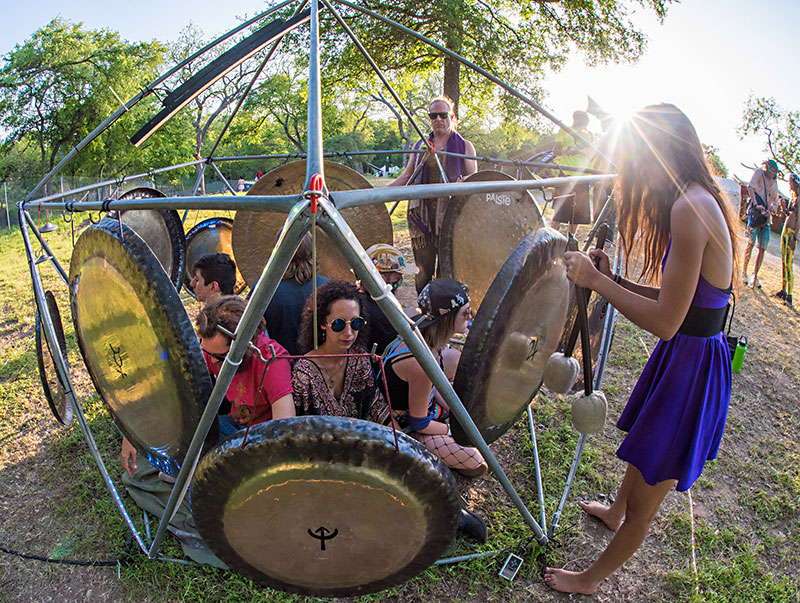 The Sonic Portal of gongs (Photo by David Brendan Hall)

"Enjoy your flight," winks the man in a tie-dye top hat as I plop down amongst four perfect strangers inside the Sonic Portal, a cage of gongs accented by colored lights. Preparing for inter-dimensional travel, we sit in quarter lotus poses and close our eyes while Admiral Hits and his assistant Moose circle us while employing mallets on the metal alloy. The swelling, sonorous crescendo ultimately ushers in serenity.

Before long, I've lost my ambitions, inhibitions, anxieties. So this is what plugging into the universal reverberation feels like. Suspended in tranquility, I'm only stirred from my reverie when a bell dings to signal the end. A tip's offered, but Hits demurs.

"We only accept hugs and nugs."

Experience. That's the word I heard most often last weekend at Carson Creek Ranch for Euphoria Fest, as if things don't simply happen there. On Friday, a motormouthed Oregonian in purple face paint described the local four-day music and camping gathering with a term parroted by attendees: "transformational festival." A spiritual awakening amongst empirical adventurers? Judging from the number of people dressed like butterflies, affirmative.

The most fashionable adornment at Euphoria were iridescent shawls printed with cosmic symbols and geometric designs. The festival's populace, a composite of hip millennials, furry-booted ravers, crystal hippies, and baby boomers in Grateful Dead T-shirts that came to see Disco Biscuits, who jammed for nearly three hours on Friday to fill in for NYC DJ duo the Knocks when their flight was canceled, are also fond of things that light up (hula hoops, gloves, shoes). Ball caps covered in enamel pins designating concerts attended, human-fox hybrid accessories, and Native American headdresses – although they're expressly forbidden – all accessorized.

Those pursuing evidence of a harmonic convergence coalesced around the main stage on Friday night for top-billed DJ Pretty Lights, who enlisted a coterie of synths, drums, and samples in bringing avant-garde electronics to brilliant fruition in transcending the festival's defining EDM. Verification of Euphoria's transformative nature occurred all weekend at its chapel, where at least seven couples were married – a mix of legally binding ceremonies and festie love commitments. One of them was Euphoria owner Mitch Morales, who hitched to his longtime girlfriend on Sunday afternoon. 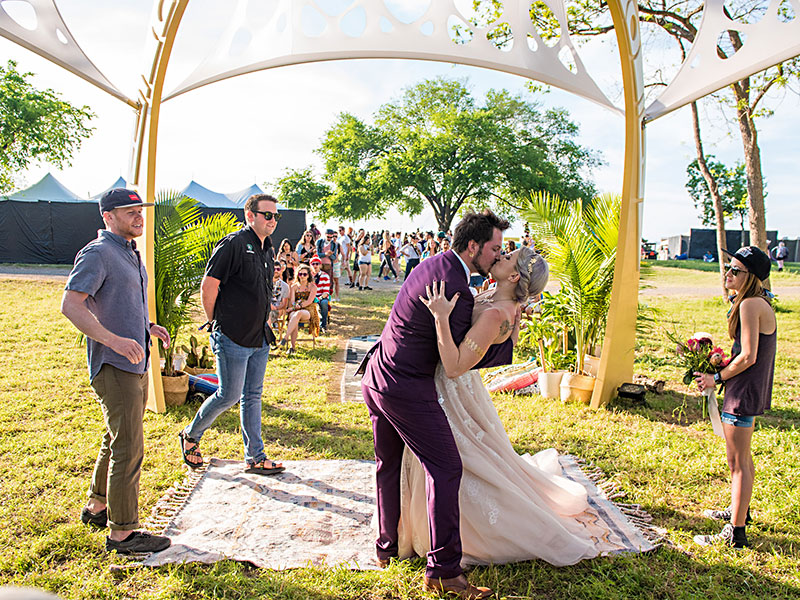 "You may now kiss the bride." A couple is married at Euphoria. (Photo by David Brendan Hall)

The 32-year-old graduate of Georgetown High founded Euphoria in 2011, high on a sense of community he discovered at music festivals and eager to proliferate the experience. It began humbly at Thunderhill Raceway in Kyle, drawing some 2,000 people, many of whom had gotten in free. Two years later, Euphoria took up residence on the Eastside farmland near the airport that's become paramount to the event's identity, and annexed its first campground in welcoming Morales' estimate of 4,000 attendees.

Since he quit his energy finance job two years ago to plan the fest full time, Euphoria's founder says it's garnered larger numbers than that in camping alone. He cites 15,000 daily festers last year and offered similar numbers last weekend. Euphoria's press materials bill it as "The leading electronic/rock music festival in Texas and throughout the Southwest," a statement as impressive as it is difficult to quantify.

According to Morales, Euphoria's status as a destination is corroborated by 40% of attendees originating from out of state. An older Californian named Brian told "Playback" he'd been coming annually since Earthdance ceased in 2013, blaming both Coachella and Outside Lands ballooning in size, and swearing there's nothing in the Golden State that compares. His host has heard that before.

"I think it resonates with people who are tired of the same old festival experience," ponders Morales on what makes Euphoria unique. "It's the way we talk to our fans, the way we address people's needs on-site, the sense of community they feel. We're not a multimillion-dollar production company, and people see that we care about the individual experience." 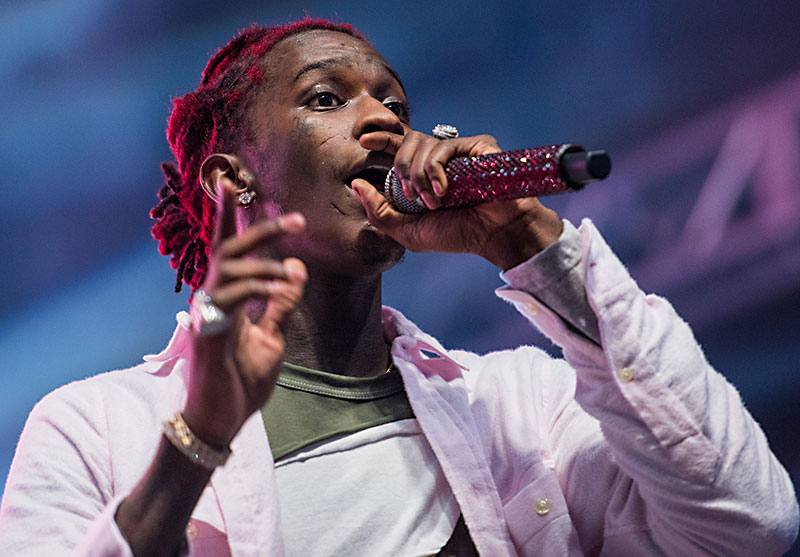 On Sunday night, following a heavy electro set by recently revealed anti-government operative Moby, "Playback" was approached by Johnson's Backyard Garden owner Brenton Johnson, who looked as happy as a green bean plant on a sunny day. A surprising encounter considering that, in 2015, the neighboring farmer's complaints about the volume, hours of operation, and concerns of festivalgoers trampling his crops prompted a lengthy county court battle waged between himself and representatives from Euphoria that resulted in earlier sound curfews and a process change for mass gathering permits. Johnson confirms he's now making good money renting field space for festival camping.

Meanwhile, outside Euphoria's gates, a street team passed out fliers for a competing festival called Middlelands.

The event, a medieval-themed EDM fest staged by two Live Nation partners – ACL Fest producers C3 Presents and Electric Daisy organizers Insomniac – launches next month 130 miles east at the Renaissance fairgrounds in Todd Mission. Bassnectar, Kaskade, Jurassic 5, and Major Lazer top its bill. Even with the timing, proximity, and genre similarity to Euphoria, Morales asserts there's room in Texas' market for both Middlelands and Euphoria, plus other new EDM fests like Dallas' Something Wonderful.

"No one in the entire industry is going to work harder than me," offers Morales, adding that Euphoria's future is flexible. "If customer reaction dictates that we cap at 15,000 or 20,000 in a scalable and attainable way, then I'm happy with that also."

Asked how an indie promoter with just six years' experience can book against corporate giants, Morales contends that fans and artists alike are looking for "unique plays" and Euphoria's size and style suits that. Other fests have bigger budgets, but he's cultivated an experience. In fact, on Friday, he too stumbled upon the Sonic Portal.

"I was walking around and I heard this noise and said, 'What is that?' I didn't even know it was at the festival and I've reviewed everything down to the porta-potties," he smiles. "It was a cool and surreal moment."