"What are you listening to?" The question, posed on the opening track of Ruthie Foster's eighth LP for Austin's Blue Corn Music, tingles with post-breakup curiosity and finds the 53-year-old local folk and blues singer answering back on a bold set of songs ranging from Chris Stapleton, Mississippi John Hurt, and Stevie Wonder to Black Sabbath. While nine of the 10 tracks on Joy Comes Back are covers, their cherrypicking conveys Foster's recent hardship in negotiating shared custody of her 5-year-old daughter. The three-time Grammy-nominated singer continues weaving a tapestry of roots music along the lines of previous soul-baring acoustic efforts (Crossover, 1999), Southern gospel blues (Runaway Soul, 2002), and Lone Star country crunch (Promise of a Brand New Day, 2014), but like 2012's Let It Burn, she does so mainly as a song interpreter. Instead of Adele and the Black Keys on the former album, Joy Comes Back steers back toward Foster's brand of earthen Americana. On the Stapleton-penned "What Are You Listening To," her rendition parallels the original's endearing curiosity but layers organ flourishes and soaring harmonies. For "Loving You Is Sweeter Than Ever," Foster strips the Motown classic of its percussive jaunt in favor of a cathartic ballad strewn with honey-dripped harmonies and a key-based progression. Even in the unexpected "War Pigs," she re-imagines the Seventies metal staple into a bayou jam bolstered with a swamp grit of resonating harmonicas, zig-zagging slide guitar, and wild-eyed crooning. Foster's pliable voice winds through soft parabolic prayers ("Abraham"), country-pickin' yelps ("Richland Woman Blues"), and introspective recollections of her time in the Navy ("Good Sailor"), traversing intimate and soaring timbres. "Forgiven" closes in spiritual transcendence, Joy Comes Back traversing a confluence of healing and strength found in songs that aren't her own but which she can call home. (CD release: Paramount Theatre, Sat., April 1)

Full Circle
The gospel according to Ruthie Foster 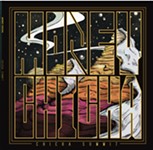