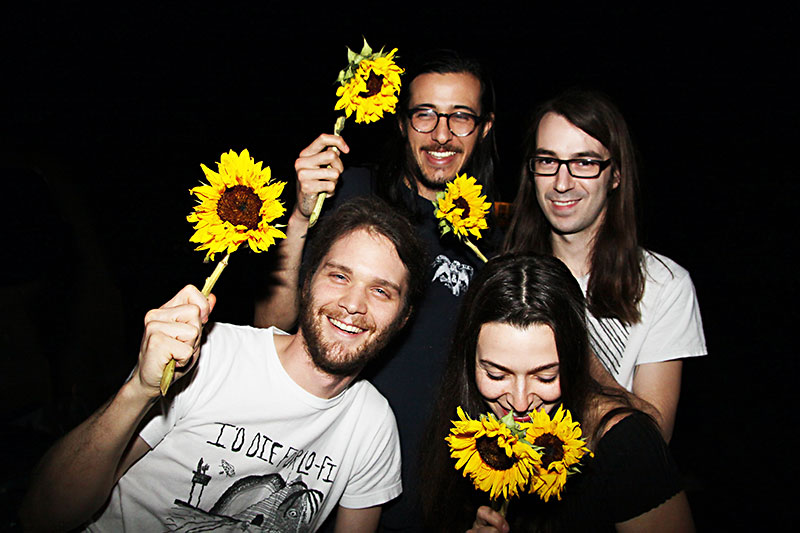 Annabelle Chairlegs' compound on the Eastside houses a dreamy setup for local musicians: a duplex in a spacious 78702 lot serving as home for three of four band members, a practice space, and occasional recording studio. Plus, it boasts a big front porch, where the band sits to discuss SXSW.

Bassist Derek Strahan and drummer Billy Wong strain fruit, while Mackin and guitarist Matt Schweinberg knead dough. Like most Austin musicians, they face the eternal dilemma of swinging enough time off from work during the busiest week of the year. They're optimistic.

Annabelle Chairlegs started in 2014, after Mackin moved from Santa Fe to Austin. She met Schweinberg that SXSW at her house show, and by late summer the band performed its first set – opening Holy Wave's European tour kickoff at Hotel Vegas. Not a bad bow for a local act in a scene where 50 Tuesday night sets at Beerland offer a typical rite of passage for newcomers.

"We don't party super hard," says Strahan, also noting that they practice a lot. "We're all good people with good heads on our shoulders. I think our parents would be proud of us."

Mackin bristles at Annabelle Chairlegs being labeled a psych group or suggestion that her kaleidoscopic lyrics are drug-related.

Annabelle Chairlegs plays out around town often, exuding polished, glitzy, Sixties-inspired rock & roll fleshed out by guitar licks straddling the line between surf-y and noir. Helmed by Mackin's strange, arresting voice, usually either a powerful belt or contorted into theatrical yelping, the band commands the stage with intense authority. After last spring's Levitation cancellation, they got re-booked at Barracuda for an early spot inside, which they packed and coursed electricity through the front room audience.

A sophomore LP is written and ready to be recorded, once they scrounge up the cash or land with a label. Mackin, the primary songwriter, says the new material leans darker, pulling the dreaminess of the band's sound to a spookier place. She bristles at Annabelle Chairlegs being labeled a psych group or suggestion that her kaleidoscopic lyrics are drug-related.

"It's not like I'm tripping out and writing about the experience," shrugs Mackin. "Most of life is trippy enough as it is."