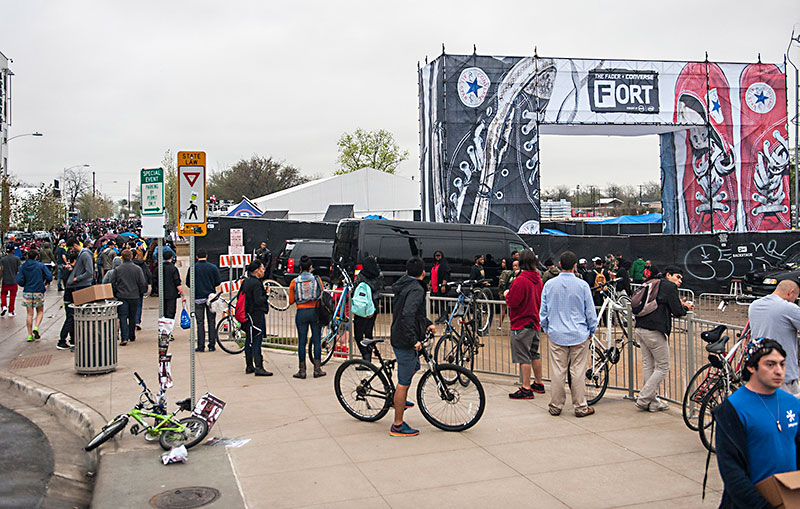 In recent years, these festivals within a festival – held during South by Southwest, but not affiliated with conference programming – have acted as glowing bulbs for tens of thousands of moths attracted to stacked bills of top-tier talent and free booze. This month, none of the three will exist in any recognizable capacity.

Fader Fort lost its long-held turf at the soon-to-be-redeveloped Plaza Saltillo and, according to city permits, will share space with Volcom at the comparably tiny Clayworks Studio/Gallery on East Sixth (a formal announcement arrives this afternoon). Hype Hotel is taking a year off to focus on developing web and mobile products. Spotify has opted to forgo its fest-style concerts, instead hosting an artist lounge, recording Spotify Sessions, and debuting new digital integration programs with SXSW. Meanwhile, not a peep from Samsung on their annual music event, and premier hip-hop afterpartiers Illmore have retired.

This shift in purpose and prominence underlines a decline in large-scale, free, unofficial events occurring during SXSW.

"It's not as if the companies all sat down in a room together and decided not to do big events this year," says Josh Rowe, who spent the last dozen SXSWs organizing the PureVolume House and Hype Hotel parties. "Part of me feels this year happens to be a confluence of circumstances. I think marketing focus has shifted within companies and personnel changes have affected their event strategies. Also important, rental prices for large venues have become unrealistic and cost-prohibitive.

"It makes it very difficult for events like ours to continue."

SXSW Director of Special Projects Brad Spies says 2017 brand participation lines up with numbers from last year. Still, the dearth of behemoth brand parties makes one wonder if their strategies have shifted based on the notion they can achieve festival market share via social media rather than the hordes brought in by giant open-RSVP concerts. Asked whether he perceives an overall trend of brands moving away from large events to small, integrated approaches, Spies thinks for a moment.

"That's to be determined," he says. "Industry trends are constantly shifting, but South by Southwest stays focused on the same things we always have: music discovery, helping creative people achieve their goals, and cross-pollination between creative sectors."

As Rowe points out, another likely factor in the changing landscape of ancillary SXSW events is that large outdoor spaces aren't as cheap or plentiful as they were five years ago. Remember Transmission's Mess With Texas fest on the Eastside? The grassy field where it was last held is now a condo.

"It used to be that there were a lot of parking lots Downtown and there are less now," offers Spies. "So there are not as many places to have those big free shows except for in a venue, which is a very good thing for Austin and our year-round music venues."

Parking lot parties are, at best, a secondary concern for SXSW boss Roland Swenson, who confirms sponsorship dollars only account for some 10% of annual SXSW income.

"Most of our revenue comes from people who buy badges and wristbands, and people who exhibit in our trade show and stuff like that. We never got any money out of Fader Fort," he chuckles. "We were able to get them to collaborate more and more on bookings, and letting our people with badges and wristbands in. That's kind of where we got to with Fader Fort. We thought that was okay for us."

Swenson, always happy to remind us that SXSW is not in control of everything that happens in Austin during the second and third weeks of March, admits one upside to large unofficial events taking place concurrently with the conference – like sharing talent occasionally.

"Fader Fort, at first, was hard for us to swallow, but we came to terms with them and we've been cooperating with them for I don't know how many years – just considered it part of the sideshow of the event," he explains. "We were good with it and there were times when it was helpful to us and times that it wasn't."

"In the big picture, I've been concerned for a long time about the way these shows have drawn a very different crowd to Austin, which is perceived like, 'SXSW is this giant free-for-all where you can drink for free all day and see all this great talent for free.' Which is fine except that too many people want to do that now," says Swenson. "So we're going to have all those people showing up this year looking for that stuff and there's just not going to be as much. At the same time, there's going to be tons of free parties and I think everybody will find enough to do."

"Overall, it definitely seems there are a lot fewer free parties, big sponsored events, and big talent going around this year compared to previous years," observes Jimmy Stewart, president of Do512, a popular resource for event RSVPs. "However, Do512's overall traffic to our South by Southwest content is actually up about 23 percent compared to this time last year, which tells me people still care about finding out about the free parties, they just have fewer to choose from. That will likely mean bigger crowds and longer lines for the free parties that are still happening."

"With some of the big, free events like Spotify House and Fader Fort going away, the smaller parties that are happening will likely benefit from bigger crowds and [hopefully] more new bands will be discovered as a result," muses Stewart. "There's a lot less big money and big talent going around, which I think is a good thing, because it'll be more about wandering into a party and discovering up-and-coming bands you've never heard of, rather than fighting to get into that secret Kanye [West] show."

Too early to call 2017 a sea change year for the collateral events surrounding SXSW, but the writing on the wall spells an altered experience for the non-badge-wearing public and, perhaps, the beginning of a more-industry, less-consumer shift. More than 2,000 official showcasing acts are still playing hundreds of free events. With SXSW parties it ain't the size, it's how you use it.

"Having a great and memorable party doesn't depend on having the most people crammed into a space, or serving the most free drinks, or even having the biggest bands," says Rowe. "I think it's about the overall experience that you're giving guests. If you have a popular band that everybody wants to see but there's a line a mile long and nobody's getting in, communication is poor, and people are unhappy. Is that a positive experience? I don't think so. We tried to create a comfortable, fun atmosphere and have cool, interesting, up-and-coming bands perform."