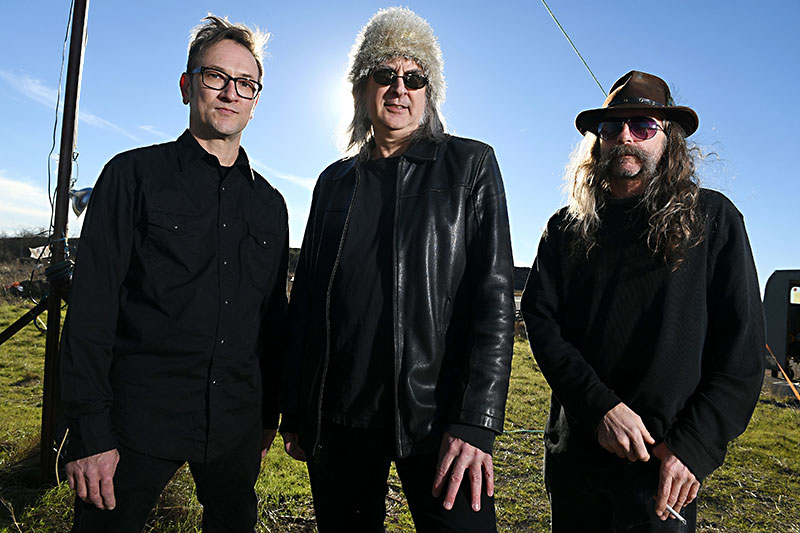 Steve Marsh cuts an imposing figure even seated. At 6-foot-5, he towers above most of the hustle and bustle at a South Austin eatery during Sunday brunch. In his long leather coat, shoulder-length white hair, and Lennon-esque granny glasses, he looks his part: veteran rock musician.

At this juncture in January, his local psych trio Evil Triplet readies the release of its molten, double-album debut Otherworld on homegrown Super Secret Records. Co-produced by the bandleader and Austin's longtime audio midwife Rob Halverson at Sonic Ranch Studios outside of El Paso a year ago, its dense acid shriek gained international buzz via internet-leaked tracks "Star Ladder" and "Get a Job," the latter a fleshed-out leftover from Marsh's Eighties/Nineties industrial outfit Miracle Room. His phone alerts him to his pre-release foreign fame.

"Richard Lynn, who's the head of the label, texted me a while ago," chuckles Marsh, 60. "He sent me a screen grab from what must be Super Secret's website, showing clicks on our songs – how many plays they're getting. These are listed by country, and in Romania, there are 50 clicks on our song! One in Finland, one in Iceland, etc.

"Richard wrote above it, 'You're popular in Romania!'"

"Maybe because this is the first vinyl I've released since a self-titled Miracle Room EP in 1990," he offers. "There's been some CDs here and there. Knitting Factory Records released one by Wisdom Tooth, which was the band that followed Miracle Room, an all-homemade-instruments electric blues kinda thing. Richard suggested we do vinyl on this, because the songs are all really long. They're not your three minute, punk rock-length songs."

"It was a cool light to play in," recalls Marsh. "Very gray."

Their self-released 1979 EP captures a band already differentiated from other punk acts by the bassist's melodious baritone. Terminal Mind meshed the Damned's guitar aggression with the angular imagination of Pere Ubu and Wire, "I Want to Die Young" even betraying the Marxist funk influence of Gang of Four. The band split up in 1980 after Marsh brought in synth player Jack Crow.

"I don't think it was the synths that did it, though," reflects Marsh, "although Jack was certainly a polarizing figure within the band."

The Murrays eventually populated other seminal Austin DIY concerns, such as the Skunks. That followed Greg's stint in the Big Boys. Marsh and Crow moved on to the fully electro Civilian Sect, which also hosted the new-to-town Brian Beattie on bass, pre-Glass Eye.

Electronic explorations continued with Life on Earth, indulging Marsh's bent for unique staging by once playing on the catwalk above Club Foot's stage.

"I always find the interesting locations," laughs Marsh. "Just to break up the monotony."

Terminal Mind meshed the Damned’s guitar aggression with the angular imagination of Pere Ubu and Wire.

"Those Texas roots bleed through," he nods today. "You can't keep them down forever."

Marsh took the hootenanny back to NYC in 1988, where he lived/worked/played for the next 16 years. After getting divorced and appearing in an Austin Music Awards-generated Raul's supergroup, he settled back locally in 2004, discovering an electronic noise underground that inspired his ensuing solo work. Evil Triplet's freak flag has now flown hard for two years.

"So, the 17-year-old me is very happy about Evil Triplet!" Laktas exclaims. "Playing with Steve is very intuitive. The chemistry between all three of us is insane."

"I get to play off both of them," says Primordial Undermind/The Flood/Rever­end Glasseye vet Volpi. "I walk around Steve's crazy guitar stuff, then lock into Kirk's crazy rhythmic ideas."

"My lyrical perspective's more emotional, philosophical, experiential," says Marsh. "The songs come from wherever my head's at. If it comes out topical, it's because the times have caught up with it."

Evil Triplet deserves a Levitation slot at the very least, and/or co-bills with Ty Segall and Thee Oh Sees. Marsh says it's down to the audience the band deserves stumbling across them. Even as Evil Triplet prepares to cut Otherworld's follow-up, outside projects abound.

In fact, Marsh considers a return to punk rock, albeit one typically twisted by his vision. He speaks reverently of Metz's hard-charging Canadian mathcore. Of course he'd need a drummer adept at odd time signatures.

"I always approach things as an art project," he says. "I'm always looking to challenge myself, to honestly reflect whatever influences me at the moment. I'm always fine-tuning my voice."

A version of this article appeared in print on February 10, 2017 with the headline: Star Ladder