We talk to the jazz titan about Coltrane, his latest album, and more 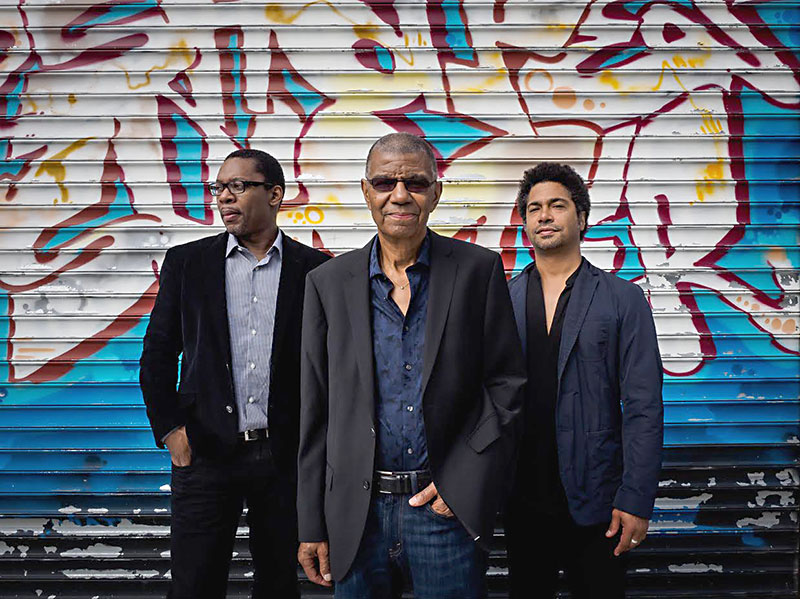 Ranging from free jazz to New Age – which net his only Grammy on 2008's Peace Time – to avant funk, his solo artistry began with 1969's DeJohnette Complex and now encompasses nearly 40 albums across a half-century. Recorded for Germany's ECM Records, with whom the drummer has a relationship stretching back four decades, latest release In Movement pairs the bandleader alongside the scions of two old friends: saxophonist Ravi Coltrane, and bassist/electronicist Matthew Garrison, son of John Coltrane's longtime bassist Jimmy Garrison. Alternating languid melodies with vibrant group improvisations, the trio swings and soars through a program that includes songs from Ravi's father and Earth, Wind & Fire, alongside originals.

A 2012 National Endowment for the Arts Jazz Master, DeJohnette spoke by phone from his home in New York's Hudson River Valley on the occasion of his first Austin date since gigs with Miles Davis at the Armadillo World Headquarters back in the Seventies.

Austin Chronicle: You've known Ravi and Matthew since they were children. You first played with them 20 years ago, and the trio's now been a working band for a few years. What's it like working with guys you've known since before they could play?

Jack DeJohnette: It feels great! They're taking care of business, and that's why I'm playing with them. They come from a lineage; I played with their parents, so that continues in present day. Matthew is like my godson. He lived with me for a number of years. Ravi's really close, like another family member. Musically, personally, spiritually, and worldview-wise, we're on similar wavelengths. So the idea of us coming together was a natural one and it's grown that way ever since.

AC: Matthew employs electronics, which you've experimented with over the years. How easy or difficult is it to incorporate synthetic sounds into organic music that depends on live improvisation?

JD: Well, electronics is the same. Matthew uses it with an organic soundscape, like a palette. So it fits right in. The juxtaposition of the electronic and acoustic, and the way we hear it, inspires Ravi and I to play different things. So it's really a great tool. People think there's no chord structure for some of the stuff we do, but actually there is, and Matthew takes care of that. Also, Ravi's playing scales and chords, and I'm working off the same thing. I also play piano in the trio as well. It's all that stuff. We trust Matthew to come up with creative ideas when he does it. He's composing with the electronics in the moment. It's not pre-setup. There are some things, but a lot of it he's doing in real time. He's improvising on the spot with the electronics as well as the electric bass.

AC: There's a lot of tributes on In Movement, a Miles Davis tune, a John Coltrane song, an Earth, Wind & Fire cover. Plus, you dedicated some songs to other musicians. "Two Jimmys" refers to Jimmy Garrison and Jimi Hendrix. What connects those two for you?

Playing with John Coltrane and working with his native Chicago’s pioneering Association for the Advancement of Creative Musicians, he moved to New York in 1966 to work with Charles Lloyd and ended up leading the percussive corps on Miles Davis’ landmark fusion records Bitches Brew, Jack Johnson, and On the Corner.

JD: They were important legends – Jimmy on the bass and Jimi on guitar. Hendrix I didn't have a chance to play with, but I did [with] Jimmy Garrison. He was incredible, just an incredible musician. He created a style of playing the bass that's still recognized and respected to this day. I thought it was great to put those two together, one electric and one acoustic. And Matthew, since he plays the electric [bass], there's an extension. He's got the influences: his father's influence, and Hendrix, with the electronics. Pretty obvious to me [chuckles].

AC: You've had a long association with ECM, and then of course there's your long tenure with the label in the Keith Jarrett and Gary Peacock "standards" band. What makes ECM the label you keep coming back to?

JD: Well, the quality of it. And the variety of music that Manfred [Eicher] records. It's an eclectic label. It's not just one type of music. Manfred likes all kinds of music, all genres, and all he's looking for is the quality and dedication and the creative sincerity of the artist. So he's made quite a reputation. The label has great sound and great album covers. In this day and age, it's an independent label that's got quite a track record. He brings the best out of the artist. We have a long – over 30 years – artistic relationship, which continues today.

AC: You're turning 75, but you're not slowing down. Unlike rock musicians, where people your age are often considered well past their prime, jazz musicians are not only expected to still be at the top of their game, but progressing. Why do you think that's the case with jazz and classical music as opposed to pop and rock?

JD: Well, you're just as relevant as your productivity is. There are a lot of elder musicians who are still quite productive: Henry Threadgill, Muhal Richard Abrams, Dave Holland, Roy Haynes, who's in his 90s, Ron Carter, who's 79, Andrew Cyrille, 77, Carla Bley, who's 80, Cecil Taylor. Still producing, still relevant, still energetic – so why not? [laughs]

AC: In your long and diverse career, what have you not done yet that you'd still like to do?

JD: Oh, I don't know – I'm just enjoying what I'm doing. Continue doing that, working with new people, composing music. I think people need music more than ever now, and need to hear vibrant music to feed their souls, and try and balance these frenetic energies that are roaming the planet. That's what I really want to do, see music become a force for good. Not only playing music, but working music in the healing arts as well – music therapy and things like that. That's what I'd like to continue doing.

AC: You've worked with so many music giants. Who was your favorite? What was the most memorable gig?

JD: There's no one person. All those people that I've worked with, they've given me so much. People in Chicago like Eddie Harris, Herbie Hancock, Miles, Charles Lloyd, Coltrane, Benny Carter – the list goes on. Sonny Rollins, Freddie Hubbard, McCoy Tyner. I feel blessed with so many people. I can't just tell you one person.

AC: Do you feel like one of the giants yourself?

JD: I'm honored to be looked at in the legacy of all the great masters and pioneers to have contributed to the music. To be mentioned in that league of players is indeed an honor, and I'm eternally grateful for that.

A version of this article appeared in print on February 3, 2017 with the headline: In Movement