Wednesday's Free Week offering at Beerland belonged to the Red River venue's regulars – the gritty, propulsive punks that have served as the mainstay venue's lifeblood for more than a decade.

As good as their studio work comes across, Xetas live is required viewing, the dynamics of their stage presence displaying the spectrum of intensity. Guitarist David Petro plays like he's on the verge of splitting apart at the seams, a frenzied blur of constant thrashing. Given Dilick's pummeling, both men reddened and dripped sweat by the end of the quick set.

For her part, Harris anchored it all with a heavy, throbbing bassline and cool composure, each line delivered with steely concentration. "Shut the fuck up and listen," said her stage presence. Happy to oblige. 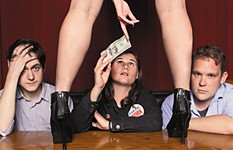