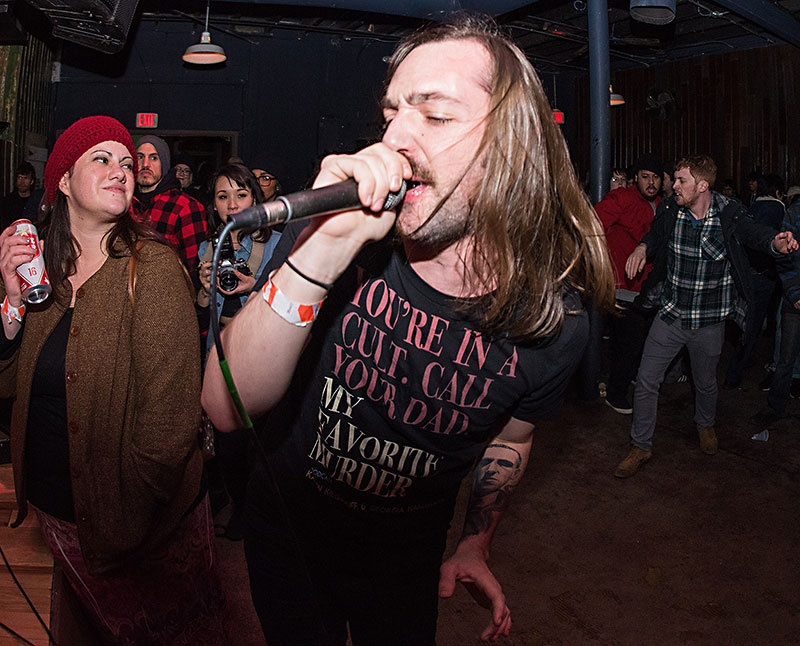 This Is Austin, Not That Great Fest 2, a festival celebrating DIY punk at its weirdest and loudest, unfolded outside on a freezing Barracuda patio, but inside, three trios – Skin Drips, Oozer, and Vampyre – unfurled their own harsh sound for Free Week-goers.

Skin Drips kicked off the audio assault with Nineties grunge. Recalling both Nirvana at its messiest and noise rock contemporaries Metz, their gravelly sound thickened with heavy distortion, vocals rendered unintelligible by the assault of fuzzy guitars and hammering drums. Twenty minutes of chaos, the trio's set surpassed closers Vampyre's in length by a whopping three minutes.

The word "sludgy" gets kicked around a lot when talking about Oozer, but it doesn't capture the urgency or command the band demonstrates onstage. Maybe sludgy in the sense of being crushed by a massive mudslide; there's a foreboding, heavy, off-kilter compositional sense steeped in distortion. The brutality of the sound feels bruising, traces of Drive Like Jehu's Yank Crime all tangled up in the sonics.

Vampyre's quick, propulsive set served up frenetic hardcore, a crushing and chaotic tsunami of noise. Brandon Brooker delivers his feverish, poetic lyrics like sermons preceding the apocalypse, brazen with confidence. Throwing himself into a crowd and inciting chaos from kids knocking into each other, Brooker had to holler himself hoarse to be heard over the cacophony of Zachary Parker Ingram's shattering basslines and Bryan Davis' hard, fast drums.