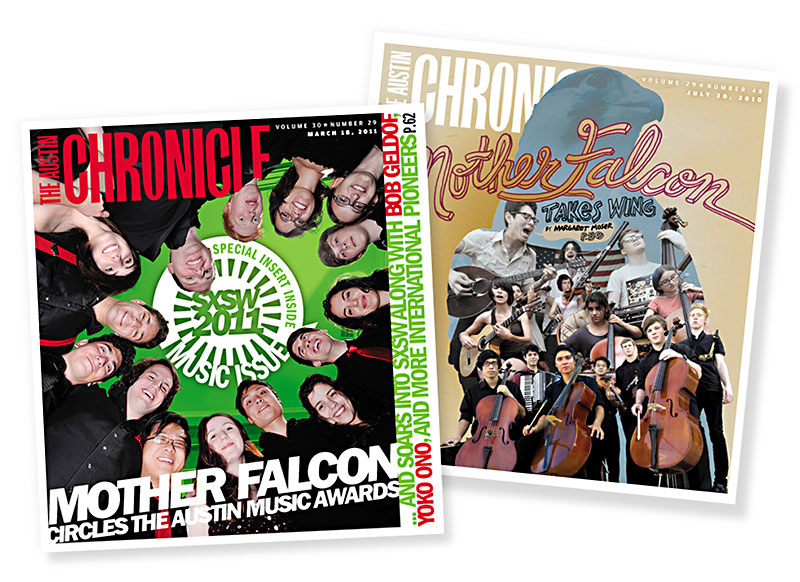 Last week, members of Mother Falcon applied their signatures to a document every band dreams of encountering: a major label contract. Seconds later, they signed its termination rejoinder, likely setting a record for the shortest tenure on a corporate imprint.

"Total formality," grins multi-instrumentalist Tamir Kalifa. "It was like, 'All right! Sweet! We signed a record deal!' Then it was promptly terminated."

So much can happen in a year.

On Dec. 29, the full band lands at Mohawk for a retrospective concert, representing not a conclusion to the project, but certainly the end of Mother Falcon as you know it.

Last October, MF's third studio LP Good Luck Have Fun came out on Universal Music Classics without a contract having been inked. Through their manager John Riedie, CEO of Austin Creative Alliance, they'd been in communication with the company for years. After their label debut, time came to complete the deal, which included Good Luck Have Fun, a follow-up, and options on two more albums.

"They'd offered a sum of money – nothing substantial – then the president left," shrugs founder/vocalist Nick Gregg. "Now they're not even a label. They merged with a jazz label [Verve]. It was just the nature of the beast. It's a hard market and we were a risk."

Faced with signing a potentially lengthy contract prompted reflection from the dozen-plus members, not concerning contractual minutia, but true existential contemplation of whether they wanted to spend the next decade in a full-time band. Their initial consensus to sign soon fractured with internal dissension.

"We always joked that being in this band is being in a relationship," smiles Matt Puckett. "Signing the contract kind of felt like getting married."

Primarily made up of symphonic-minded graduates of Westlake and McCallum high schools, the band had transitioned from late-adolescence to adulthood. Now in their post-college era, the deal prompted serious consideration of the tour/record/tour cycle stretching years into the future.

"Mother Falcon was a conduit for change and it absorbed the emotion of those changes," says Kalifa, who plays accordion and also sings. "Some of the most formative things I've experienced have been in this band. There's been high points and low points, and it's been exhausting and profoundly rewarding, but imagining another two, three, four, five, maybe more years was very difficult for some members."

For them to sign, a consensus among members would need to be reached. By late spring, there was tension, empathy, disagreement, and compassion swirling through the band dynamic, resulting in a breakdown of their decision-making process, and a lapse in communication with Universal. Gregg experienced panic attacks over it.

"This deal was putting a huge amount of pressure on us to produce and perform, and there was a fear of what toll that was going to take on the music and the emotions of the individuals in the band," he recalls.

"It was a profound moment," remembers Kalifa. "We all sat together in a room at Nick's parents' house and, one by one, talked about how we felt. It was a group therapy session moderated by each other. That was a meaningful emotional experience for everyone involved."

Mother Falcon decided not to sign with Universal, but members explored ways of maintaining a relationship with the label.

"There was a chance we were going to still sign, under my own name, clearing everyone of any legal obligation," says Gregg. "Then around that time, the label was like, 'We're done waiting for you. We'll end it.' Then everything shut down. It was part our decision, part circumstance."

Mother Falcon isn't broken up; they're just no longer a working band. The current nucleus of Gregg, Kalifa, violinist Clara Brill, percussionist Isaac Winburne, and singer/cellist Diana Burgess – plus their horn section – remains ferociously active on film scores, theatre, and long-running children's camp, Mother Falcon's Music Lab. Next Friday, they'll perform at the Paramount Theatre, scoring a puppet production of Petra & the Wolf, which will yield a recording and national tour next year. When Matt Puckett's producing an artist, Mother Falcon members are his first call for session work.

"We always talked about it as a collective, but we were always so tight-knit it was more of a band," reasons Kalifa. "Now the idea of a collective is coming more to fruition due to the circumstances."

Gregg grins when he thinks about the early days of Mother Falcon, when he'd recruit musicians on a whim and they'd stroll into rehearsal, greeted by a casual "hey," none of them knowing that they'd soon be spending four years together in vans. He calls it a "bizarre family," sustained by faith, where everyone sacrificed for the band. That faith, he says, was never broken – not this summer when internal dissent killed their major label deal, not now as members journey on separate paths.

For his part, Kalifa admits he might shed tears at Mohawk when the full band plays a final time.

"I don't see it as closure necessarily, but it's the end of a book," he says. "We're gonna write the sequel, but we don't know what it's going to be like, what it's gonna be called, or how long it's gonna take. So there's an element of uncertainty, but there's also, for me, a deep appreciation for what we've experienced together as a band."

Bill Murray and his brother, actor Brian Doyle-Murray, took in Alejandro Escovedo's coruscating Austin City Limits taping last Wednesday – a complete surprise to the PBS show's staff. The original Ghostbuster then headed over to the Belmont to see fellow Chicagoan Lupe Fiasco, rousing the rapper to perform a second encore. The Life Aquatic star had obviously left town by Sunday since he was nowhere to be seen at Seu Jorge's tribute to David Bowie at the Moody Theater.

Spray Paint's Performance at Hotel Vegas tonight, Thursday, will be the band's last local show for the foreseeable future. Guitarist/vocalist Cory Plump, co-founder of vinyl and multimedia purveyors Monofonus Press, is moving to Mexico. The trebly No Wave trio, constructed in 2012 out of fossils from extinct noise rockers When Dinosaurs Ruled the Earth, is among the best punk acts in Austin history.

Joe Doerr isn't just a lead singer, currently fronting Churchwood and LeRoi Bros., formerly of Ballad Shambles and Hand of Glory. He's also a poet with an MFA from Notre Dame. Friday at 7pm, Doerr appears at BookPeople to read fire-minded entries from his latest book Tocayo in addition to singing some songs with members of Churchwood, who recently released their spirited third LP Hex City.

Sound on Sound announced dates for its 2017 festival, held again at the Renaissance village Sherwood Forest in McDade, Nov. 10-12, one weekend later than its first iteration. Early-bird tickets go on sale today. 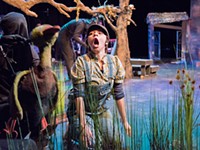