Did Shearwater Cut the Best Protest Album of 2016? Legitimate protest albums spring from dire political climates. They're an expression of fear, but also a rallying cry. Sixties folk strummed acoustic pleas to, you know, like, get it together, man, while Seventies punk manifested that unity in collective anarchy.

With that in mind, Jonathan Meiburg, brainiac behind Austin art-rock outfit Shearwater, penned one of the most prescient protest records ever recorded in January's Jet Plane and Oxbow. When the album, the band's ninth LP and second set of originals on Seattle's Sub Pop, came out, President-elect Donald Trump's path to the White House still seemed like a long shot. Meiburg asked, "Where are the Americans?" long before the Election Day results made many a U.S. citizen question everything about their country.

"It's funny, sometimes your art knows things that you don't know or knows things ahead of you that are just lurking in your subconscious," says Meiburg now.

His self-proclaimed protest album isn't a typical one, swinging for the fences on chiming Eighties balladry, recalling the brightest points of U2's career. Meiburg's fluid vocals, soaring from a whisper to a scream in seconds, drives the drama of dulcimers and electric guitars, which create the grandiose soundscapes the band specializes in. All the while, the message swirls amongst synthesizers and New Wave flourishes.

Lyrically, most of the songs are so subtle you might miss their objections entirely. "Only Child" could be about a troubled childhood rather than the state of the nation that "never laid the gun down." The author's refusal to preach leaves room for broader thematic interpretation. "You know how sometimes you're so tired of the country/ Its pop tones and its pale kings/ And its fences like knives," intones Meiburg on "Pale Kings" way before a decidedly spray-tanned individual was elected to the highest office.

That lens of power gets trained on the world stage in "Quiet Americans," wherein the bandleader sings, "Piss on the world below like a dog that knows his name."

"Protest music is such a minefield, because there's a lot of terrible music that you could put in that classification," allows Meiburg, 40. "Because it doesn't have room for you. It's someone yelling at you, or people shouting slogans. I don't like slogans. I wanted to make a record that had that energy, but also had room for you to participate in it – sort of meet me there."

Don't expect any "Dump Trump" refrains, or attacks on a specific subset of "Quiet Americans," for that matter. Jet Plane and Oxbow takes a view from commercial airliner altitudes. From there, things look even bleaker, maybe.

"I was thinking about American pathologies," he recalls. "When I was writing the record, I thought we were in the process of exorcising them in one way or another. Turns out we were heading for full-blown hospitalization, apparently."

"I listened to an [archival] interview where he was talking about his social protest music, and I was like, 'What?' Then I went and listened to it more carefully, and I was like, 'This really is kind of a bleak protest record.' There's room for you in it, and that's really the energy of it. There's explicit things in there if you're looking for them. I thought it would be really worthwhile to make a record like that."

1980, the year a B-grade actor became president, seemed like a fitting mirror for many of 2016's more ominous signs. Jet Plane's author was only 4 at the time, experiencing the beginning of the Eighties as a "smear of colors and light." Some of his favorite music from that time, including Scary Monsters and Peter Gabriel's third self-titled solo album, expressly channeled the growing anxiety of the era.

"The world felt like it was on the cusp of a really big change," asserts Meiburg. "It seemed to involve technology in some way, but also geopolitical events. Nobody knew how that was going to sort out, so there was this excitement and confusion that you can really hear in the music from that time."

Tech takes on the role of sonic inspiration rather than lyrical thesis on Jet Plane and Oxbow. More than any other Shearwater disc, it balances the scales between organic and digital sound, incorporating acoustic strums alongside almost hip-hop-inspired undercurrents. That's a fitting update for Scary Monsters, which flirted with such sounds using pre-MIDI (musical instrument digital interface) electronics.

“[Bowie] was such a humane and intelligent person,” states Meiburg. “He was interested in all kinds of things, and that’s what’s worth imitating.”

Meiburg couldn't have predicted how much weight the critiques on the new album would take on post-election, but then came the death of his inspiration for not only the album, but another project Shearwater rolled out on tour. Even before Bowie's death in January, the band planned on covering songs from 1979's Lodger, a few at a time. That culminated in the group interpreting the entire album as an encore on three separate stops.

The complete run-through of Lodger, recorded for the Onion's A.V. Club, was pressed on limited-edition vinyl and mastered by Greg Calbi, who mastered the Bowie album, and was released in October.

"It felt like such a celebration," says Meiburg. "It was this great release of energy."

Like his inspiration, Meiburg has no aspirations to Woody Guthrie-hood. The fact that Shearwater was on tour singing nightly about the ailments of the American condition, at the same time Trump zigzagged the U.S. spouting hatred, proved a coincidence rather than a crusade. The same can be said for Scary Monsters. Its subtle critique flew under the radar of the calls to arms put forth by many of Bowie's contemporaries.

"He was such a humane and intelligent person," states Meiburg. "He was interested in all kinds of things, and that's what's worth imitating."

Shearwater's vessel has plenty of other interests of his own to keep him busy. When reached by telephone the day after Thanksgiving, he was at a nonfiction writer's retreat in upstate New York, where he took a break from touring to work on his upcoming book about the caracara, a South and Central American bird of prey (revisit "The Empire That Dreams of Us," Feb. 26, 2010). That breadth, rather than a singular focus on taking down "The Man," perhaps, makes Meiburg's take on the American condition more accessible in 2016.

"It's about loving and hating your country at the same time, which is something I think almost everybody feels," explains Meiburg. "You just feel so sick of it sometimes, because you keep making the same mistakes over and over, and especially the unforced errors – the problems we create for ourselves. And now by electing Trump, we've just committed one of the biggest unforced errors in the history of civilization, I think."

And what role for musicians moving forward?

"There's good reason to be mad, but outrage is very precious," he notes. "You can't just live in a stew of it, otherwise you'll break down. So we have to figure out something else to do with that. For me, if nothing else, I'm lucky I get to plug in an electric guitar and make a lot of real loud noise in the hopes that generating energy is something someone else can use and it's not just me yelling at a wall.

"That's what musicians have, and what they're supposed to be doing: generating something that others can use."

A version of this article appeared in print on December 9, 2016 with the headline: Pale Kings & Quiet Americans 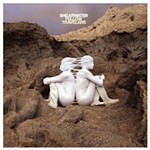