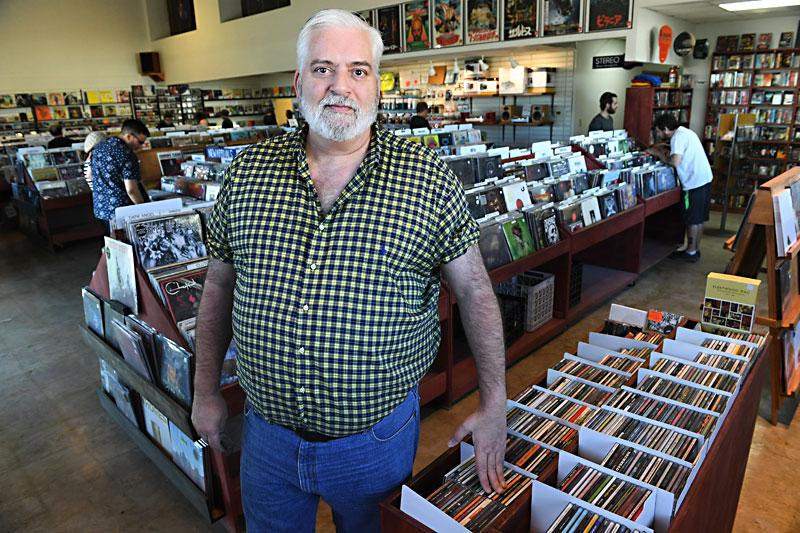 Dan Plunkett at End of an Ear (Photo by John Anderson)

"There won't be 180 people waiting outside when we open like on [April's] Record Store Day," says End of an Ear co-owner Dan Plunkett. "But it's usually a really good day for us."

Consumer holidays aside, Plunkett's seen a 6% uptick in business since relocating into the former Action Pawn building on Ben White and Clawson one month ago. Along with die-hard regulars and visiting dignitaries including Fucked Up's Damian Abraham, Guided by Voices' Robert Pollard, and country outlaw Jerry Jeff Walker, End of an Ear's new digs are attracting virgin customers.

"There's been a weird element of people coming in off Ben White, or people who found us on their phone looking for turntable needles who've never heard of us," detailed Plunkett during a busy Sunday afternoon at the shop. "That's odd because we're just five minutes away from where we've always been."

The recent sale of the building on South First where Plunkett and partner Blake Carlisle opened the shop in 2005 meant the end of an era for End of an Ear, but it also prompted a game-changing transaction. Plunkett and Carlisle found a perfect location two miles south and financed a loan for its purchase – a bold move in a town where few, if any, record stores own their own property.

"It's kind of like buying a house: Your mortgage payment ends up being less than what you'd be paying in rent," explains Plunkett. "Sure there's headaches like having to fix your own toilets, but now we don't have to worry about rent going up or it being sold. It's a relief."

It's also a sign of stabilization in an industry that's endured years of decline. Long gone are the days of knowing you could sell 500 copies of a major artist's record, but indie stores – equipped with staff knowledgeable in niches – now have a handle on customer interest. Plunkett says CD sales have steadied at 15% of overall revenue, while vinyl now represents 60-70% of their business – the majority of that being new records.

"Who knew cassettes would come back?" shrugs Plunkett, who co-owned another record store, 33 Degrees near UT, when that format was dying out. "We've all had to keep on our toes."

End of an Ear now employs 11 people, a big operation compared to the early days when it was just he and Carlisle unpacking boxes. Plunkett says the first seven years in business were "panic mode," but now they're comfortable and, with a new building, enjoying the prospect of longevity. Since they've "bought the house," "Playback" asked how he'd humanize the store's life cycle.

"I think we're in our energetic 30s, maybe having a kid soon, but we're still having fun with it."

Grizzly Hall, the East Riverside venue that looks like a heavy metal hunting lodge, has changed hands. The 500-plus capacity room, which in recent years has housed Beauty Ballroom, Antone's, and Midway Field House, will now be operated by longtime Dirty Dog Bar GM Ben Davis and booker Anthony Stevenson, whose Come and Take It Productions has slotted metal into the Sixth Street mainstay as well the annual Texas Independence and Texas Revolution fests.

Stevenson confirmed he and Davis have taken over the lease at 2015 E. Riverside from Jason Sabala, a former Emo's partner who opened Grizzly Hall last May. They'll take over operations immediately and plan to revamp and rebrand the club in coming months. There's roughly five years remaining on the current lease.

Texas thrash legends D.R.I. christen the new operation next Thursday. Stevenson says the venue will serve Austin's metal community, but will feature a variety of genres. Other shows already on the books include deathcore warriors Born of Osiris and classic metallurgists Anvil. Stevenson says smaller shows can be accommodated by cordoning off the venue's upper level and that they plan to have the venue open during happy hours so it can double as a neighborhood bar.

Jason McNeely says there's potential for a cultural corridor between Mexico City and Austin, wherein underground bands can cross the border and thrive in each other's scenes. The Barracuda/Hotel Vegas co-owner begins exploring those possibilities this weekend with Caravana!

The two-day event at Barracuda imports a trio of Mexico City acts: the garage-rock en Español of Jóvenes Adultos, English-language psych fuzz group Cascabel, and Risin' Sun, a Wayne Kramer-approved power trio of poofy-haired classic rockers. They'll join a cadre of Austin representatives including Holy Wave, Troller, and Rotten Mangos on Saturday. The night before, Ringo Deathstarr, Daniel Francis Doyle, Ramesh, and others lay out a welcome mat at the Seventh Street club.

"Mexico's music scene is incredibly vibrant and we want to be a part of it," enthuses McNeely. "It's not just psych and garage, it's all genres – hip-hop, rockabilly, country & western. I want to create a consistent exchange of performers between there and Austin."

Levitation Fest has been scratched for 2017. Organizers promise a return in 2018, writing, "With more time we can present the best festival without compromises." Last month, "Playback" reported that Levitation owners were in talks with ACL Fest producers C3 Presents – the local Live Nation affiliate – to co-produce the event. Tim Sweetwood, C3's talent buyer who's been point man on the partnership, declined comment, but the deal appears to still be in the works. After this year's festival cancellation due to weather, Levitation organizers were left in a legal entanglement with Stratus Properties, owners of former co-producers Transmission Events.

Bruce Springsteen appears at BookPeople next Thursday promoting his bestselling autobiography Born to Run, not to be confused with a 1996 Bruce-ography of the same title written by sometimes Chronicle contributor emeritus Dave Marsh. The tell-all, focusing on music first, life second, delves deep into the Boss' recurring depression issues. Tickets for the event, offering a pre-signed book and a photo with the king of New Jersey, sold out instantly on Tuesday. It's Springsteen's first trip to Austin since playing at the 2012 Austin Music Awards alongside Joe Ely and Alejandro Escovedo.

Black Pistol Fire played an unadvertised show at a women's clothing boutique on Saturday afternoon – their first hometown gig since packing Emo's in May. Taking a break from their relentless conquering of North American stages, rock & roll live wires Eric Owen and Kevin McKeown set up on the floor and got rowdy, bashing out favorites then testing out some patient, soulful material from a forthcoming fifth LP. 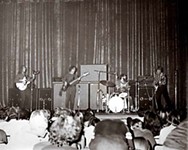