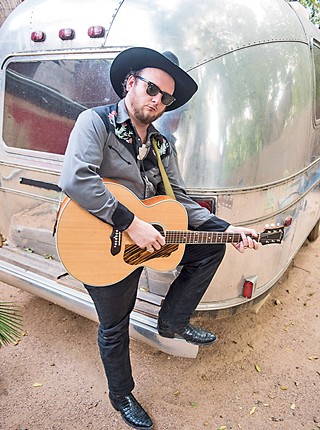 photo by David Brendan Hall
Cauthen’s songwriting puts him on par with the rising Americana tide surging against popular country music in Nashville behind artists like Chris Stapleton, Jason Isbell, and Margo Price.

Paul Cauthen strolls into the backstage area at Stubb's with a broad stride and an even wider grin. Solid of stature, the singer boasts an intimidating presence offset by boyish exuberance. He comes off as a consummate Texan, projecting a roguish independence full of hard-earned pride and grateful humility.

All those elements coalesce full force on Cauthen's solo debut, last month's My Gospel, one of the best country albums of the year. Unlike his previous local act Sons of Fathers, the new four-star effort (see "Texas Platters," Oct. 21) unleashes the Tyler native's booming, versatile baritone in songs both searching and swaggering.

On Red River, Cauthen falls heavily into a chair outside of the green room and waits to open for Elle King at the start of a monthlong tour together. He sparks a pipe and exhales, brief reprieve from a whirlwind week that includes playing with Kris Kristofferson and flying to Cleveland for a Rock & Roll Hall of Fame tribute to Johnny Cash at the request of John Carter Cash.

"I was beside-myself excited," affirms Cauthen, his thick Texas drawl punctuated with a hearty laugh. "It's a full-circle thing. You grow up listening to those guys and now you're in a position to try and fill those shoes. It's a big ol' mindfuck!"

The threads of those classic outlaw country influences weave throughout My Gospel, but Cauthen also injects a soulful Southern flair that hearkens Elvis as much as Cash and Waylon Jennings. Yet the album isn't simply a throwback homage. Cauthen's songwriting puts him on par with the rising Americana tide surging against popular country music in Nashville behind artists like Chris Stapleton, Jason Isbell, and Margo Price.

"I just wanted to be honest," he says. "I believe what's lacking in the songwriting world is honesty, people writing from their heart. It sounds cliche, but I want to feel what you feel. I want it to be almost uncomfortably personal. That's what you hear in a song by Guy Clark or Townes Van Zandt.

"Those guys set a standard that nobody lately has been upholding."

The journey to that artistic realization wasn't easy or direct. It meant Cauthen splitting with Sons of Fathers and his songwriting partner David Beck just as the Aus­tin roots outfit began garnering national attention behind 2013 sophomore effort Burning Days ("The Prodigy & the Prod­igal," March 29, 2013). Cauthen contends the split was mutual, but bitter nonetheless.

"When David and I started Sons of Fathers, we wanted to be like the Everly Brothers forever, but you grow apart musically," offers Cauthen. "David was writing more on the pop side and I was writing more on the country side. The reason Sons of Fathers worked was the tension of me and him pulling music left and right, and causing it to be right in the middle. But we grew apart and it was time to move on.

"We didn't talk for a year," he continues. "I felt like we had thrown away everything we worked for. Splitting up the whole team, management, everybody that we loved that had helped us get to that point; we let a lot of people down."

That guilt weighed heavily on Cauthen, even knowing he was making the right artistic choice. "Grand Central," the first song he wrote for My Gospel, pulls between the doubts and freedom he felt in stepping away from the band. The singer's low croon sweeps in a penitent plea as he searches for his next move.

After Sons of Fathers' spring 2014 breakup, Cauthen set up in New Braunfels and began writing. He found himself revisiting his East Texas roots and an upbringing in the church by his minister grandfather. What emerged is rough and world-weary gospel, hopeful yet rooted as much in the soil as in the heavens.

"When I finally had a table to come to and sing on my own, I decided I was gonna do what I did when I was young, sing how I first learned," he attests. "I'm not gonna sing how anybody's taught me, not gonna sing because it sounds cool and that's what's on the pop radio. That's when you find yourself. Don't change what got you here, and what got me here was a big, boisterous, badass voice.

"I've gotta back it up and use it correctly or I'm cutting myself short."

Working with producer Beau Bedford, Cauthen began to snag studio time whenever he could on a nonexistent budget. He recorded at Arlyn Studios, Modern Electric Sound in Dallas, and Sargent Recorders in Los Angeles. His biggest coup occurred when Bedford secured a slot at the legendary FAME studios in Muscle Shoals.

My Gospel's best tracks swell with the soulful backing support of the studio's standout in-house contributors. "Hanging out on the Line" burns in poignant pleas, and the title track closes in a soaring reach for redemption, but "Be There Soon" builds like a cathedral behind the organ playing of Spooner Oldham, session immortal and co-author of golden oldies "Cry Like a Baby" and "I'm Your Puppet."

"You get into that studio, and you feel there's just another presence," marvels Cauthen. "That's what God is to me, God proven in the flesh: when something beautiful is happening in the studio and everyone's on the same bus together in harmony."

Cauthen knew he'd done good work, but in time-honored music business fashion, he struggled to find a label to release it. Having enjoyed a modicum of success with Sons of Fathers, he didn't want to put out the disc without proper support. He set a deadline of his 30th birthday this spring to strike a deal or put his music on the back burner while he focused on building a life with his new fiancée.

"I was done, just over it," he admits. "I was scraping by and me and my lady were getting serious, so it was time to either start making a living or get out of the old dreamboat. I ended up getting a call from Lightning Rod [Records] on my birthday."

The Nashville imprint – which boasts releases from Austinites James McMurtry and Joe Pug, Texan great Billy Joe Shaver, and one of the hottest hands in the land, Jason Isbell – recognized an authenticity in the LP that transcended the head-turning vocals, and put its weight behind Cauthen.

"One thing I love about Chris Stapleton was that he'd been writing all these cookie-cutter hits for Nashville, but when he went to the truth for himself after his father passed, he broke away everything and just said, 'What would me and my dad like to listen to?' Sturgill Simpson, same fucking thing. Once you cut everything out, you go back to what you're actually good at and nailing that 100 percent. That's when you come out with these breakout records.

"I'm not saying that mine is a breakout record," pauses Cauthen, "but these things happen because they tap into their inner soul and self. I love Stapleton's album, I love Sturgill's Metamodern Sounds. They're amazing, honest records. They're tapped in."

Stepping onstage later that night at Stubb's, it's clear that few of the fans packed into the amphitheatre outside to see Elle King have heard Cauthen before. As he launches into "Still Drivin'," the chugging rhythms from the quintet and Cauthen's freight-train vocals immediately capture the audience's attention. By the time he closes 40 minutes later with "My Gospel," converts make themselves heard loud and clear.

"I'm not here to cookie-cut it or do any smoke and mirrors," says the singer, taking a drag from an American Spirit cigarette. "I'm not here to impress anybody, not here to target market. I'm here to welcome and spread my gospel. It's the true raw honesty of the situation.

"I'm not here for any of the bullshit anymore, just spreading this music."

A version of this article appeared in print on November 25, 2016 with the headline: The New Testament 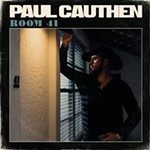 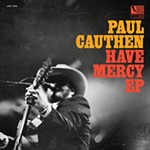