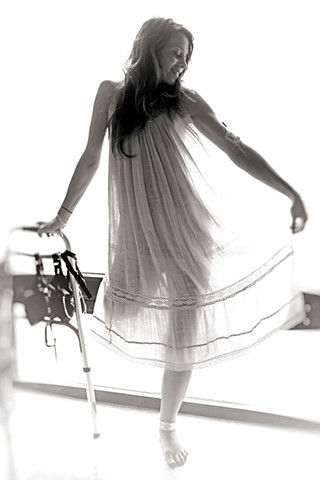 In a moment, your whole life can change.

On Nov. 2, Savannah Welch had been enjoying an idyllic afternoon in Wimberley. The local singer/actress, her esteemed songwriting father Kevin Welch, and young son Charlie stopped at the library then headed on to the farmers' market, a favorite weekly routine. As she perused veggies, a driver in an SUV lunged out of a parking space then, mistaking the gas pedal for the brake, gunned the vehicle directly into Savannah.

"I didn't even have time to turn around before the truck hit me. I think I went under it because what I saw was the underside of the vehicle – pavement, truck, pavement, truck, over and over," she calmly recalls on Tuesday from the patio of a rehabilitation hospital in Kyle as her father excuses himself from hearing the horror retold. "I had two conscious thoughts: 'Is this really happening?' and 'When is it going to stop?'"

The walls of Savannah's hospital room are plastered in get-well messages. Kelley Mickwee, her bandmate in all-female country quartet the Trishas is coming over for a sleepover tonight. On Savannah's wrist hang three medical bracelets, one reading "fall risk." After being rushed via helicopter to Brackenridge Hospital, the trauma in her right leg was so severe surgeons had to amputate it above the knee. Her "residual limb," as doctors call it, is dressed in a gray cotton covering. In three months, when swelling subsides, she'll be fitted for a prosthetic.

"This is where I pump iron," smiles Welch from her wheelchair as we pass the hospital's physical therapy gym where she does daily strength and mobility training. "It's totally rewarding. I get to learn to do life again."

Since the freak accident, Welch's perspective has remained astonishingly positive. She knows her injuries could have been worse and she's thankful her father was unscathed and her son was talking to a family friend and didn't see the crash. A tidal wave of love and support from Austin's music community, not to mention $65,000 in donations, has swelled her heart as well.

"I'm grateful for every tiny, little thing – every comment, every donation, every visitor," glows Welch. "I feel like the sweepstakes lady standing in the doorway with the balloons and big check, crying."

Only two weeks ago, lying on her back in a helicopter, Savannah thought she might be dying.

"I may have just been passing out from blood loss, but I felt myself fading, like I was sinking down and everything was closing in," she recalls, considering how the experience re-prioritized her life. "In those moments, you're not thinking, 'Shit, I never got to go to Spain!' or 'I never put out that record.' The things that come up are the people in your life. That's where my focus is."

She's also been thinking about an upcoming gig: the annual Legends & Legacies show at the Continental Club on Dec. 23, which features multi-generation family collaborations from favorite Austin clans like the McMurtrys, the Grahams, and the Gilmores. Savannah's hoping to return to the stage that night and play with her brother Dustin Welch and her pops. For the family of songwriters, recent events have yielded no shortage of material.

"I have a song idea for us," says Kevin to his daughter, his eyes bright with pride. "I'll show it to you."

Among the many bullish guarantees President-elect Donald Trump made on the campaign trail was calling for a full repeal of Obamacare on his first day in office. Put down the Canadian immigration application. Our spray tan leader-to-be has already walked back his complete obliteration of the Affordable Care Act.

Regardless, it's a threat health care leaders are tracking. Here that includes the Health Alliance for Austin Musicians, a nonprofit connecting Austin's musicians with primary health care options plus hearing, vision, and dental services. Executive Director Reenie Collins doesn't expect sweeping cutbacks to the medical landscape, but says HAAM's prepared. Since establishing in 2005, the organization's charge has been filling gaps left in health services. Those gaps have narrowed in the last two years, but she's confident in the organization's ability to continue to serve its 2,000 members if they broaden.

"You have to be nimble because health care is in constant flux," says Collins.

She points out that HAAM's currently operating at 100% of their funding, which currently comes from private donors, foundations, and corporations – not the government. Presently, they're focused on re-enrollment, a process for which they've again partnered with Foundation Communities. To remain a HAAM member in 2017, you must stop into the re-enrollment center (5900 Airport) before Jan. 31 – visit www.haamenroll.org for details and tips.

Here are three reasons to show up sooner than later:

• The longer you wait, the longer you'll wait. Since open enrollment began Nov. 1, they've been seeing 10-20 people daily, while the target is 30. Showing up now is the difference between the process taking a few hours and taking a whole day.

• There's premium assistance money available to help cover monthly payments for select members, based on income and geography, but it's limited and first-come, first-served for those eligible.

• If you get enrolled before Dec. 15, your coverage kicks in Jan 1. If you enroll afterward, it begins in February. Last year a former HAAM member got in a car wreck on Jan. 2 and wasn't insured. Don't let that be you.

Sound on Sound Fest will return to Sherwood Forest Faire Renaissance village in 2017, confirms owner Johnny Sarkis. According to him, this month's inaugural event saw a respectable 12,000 daily attendees. Sarkis says even though there's no longer a noncompete clause with former Fun Fun Fun Fest partners Stratus Properties keeping SOS outside Austin city limits, he isn't considering urbanizing the woodland gathering, citing a desire to build a unique event in an increasingly homogenized festival market. November rains (and nearby lightning strikes) caused the fest's final day to be temporarily evacuated, resulting in nine acts being skipped – four later playing free makeup concerts. Sarkis' only regret is that some attendees thought the show was over and went home. "Moving forward, we're going to buy a thesaurus and only use 'evacuation' when it makes sense. In cases like this, softer terminology would be, 'Wait in your car for a few hours.'"

The Saxon Pub will stay put. The Americana-focused music lair, 26, was slated to relocate to the incoming St. Elmo Public Market development. Now, real estate tycoon Gary Keller is in the process of purchasing the property at 1320 S. Lamar so the Saxon can operate in its original home indefinitely. Props to Keller for taking the lead on venue preservation efforts that city officials are always stressing.

The Austin Music Awards move to the Moody Theater this year, taking place Sunday, March 12, instead of the traditional SXSW Wednesday night slot. Charlie Sexton returns as musical director. Expect performer announcements in January, coinciding with the Austin Music Poll, a vote only half as divisive as the presidential election.