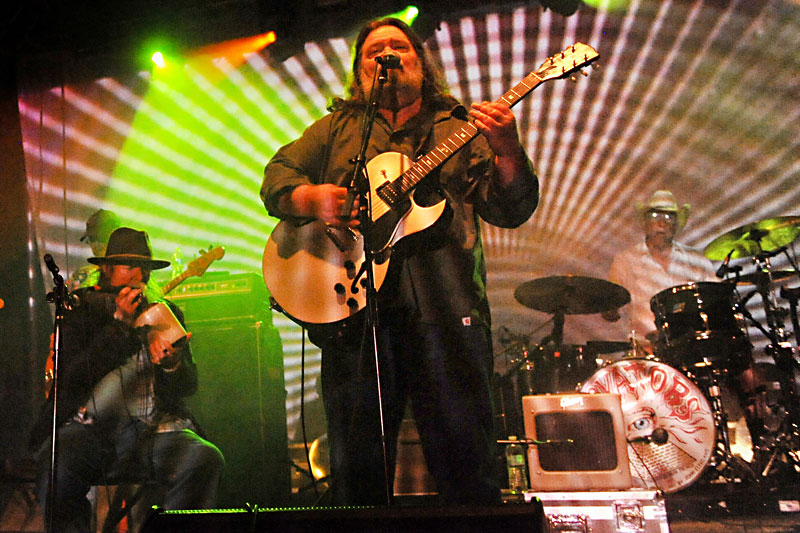 The 13th Floor Elevators marked their golden anniversary last year at Carson Creek Ranch for Levitation in the band's first performance in 45 years – and only one since the group's heyday to reunite its two key figures, Tommy Hall (l) and Austin native Roky Erickson. Original bassist Ronnie Leatherman (behind Hall) and original drummer John Ike Walton also seen here on May 10, 2015. (Photo by John Anderson)

Levitation, the popular Austin music festival that's been a hotbed for the resurgence of psychedelic music over the last nine years, is in talks to co-produce their festival in 2017 with ACL Fest promoters C3 Presents, local affiliate of global music giant Live Nation.

The Chronicle caught wind of the potential pairing through an email sent from a C3 staffer to booking agents that read, in part: "C3 has established a new partnership with the Levitation festival in Austin. I will be the point person for booking the festival. Rob [Fitzpatrick], the past booker, is still part of the internal team and will be giving input." The message detailed that the festival will "have the same general style as the previous years" back at its most recent location, Carson Creek Ranch, in May.

Last week, C3 confirmed negotiations, though both parties declined to make official statements. The two parties were in frequent communication during the reporting of this story.

Levitation has become one of Austin's favorite homegrown music gatherings over the past decade, hosting choice lineups of psych, doom, world beat, experimental electronic music, and vintage pop. In 2015, they presented a landmark, one-off performance by the truly legendary 13th Floor Elevators, the Austin band that helped birth psychedelic rock in the Sixties. This past spring, Levitation was canceled due to inclement weather, the fallout arriving last month with the news that Stratus Properties – business partners of then-Levitation co-promoters Transmission Events – is suing the Reverberation Appreciation Society for alleged unpaid debt and profit splits.

C3 Presents, founded locally in 2007, has continued expanding its portfolio of festivals – which includes Lollapalooza, Big Day Out, and Orion Music + More – since Live Nation acquired a controlling stake of the company in 2014. In 2015, they produced the inaugural Landmark Music Festival in Washington, D.C., and earlier this year it was announced they'd take over the day-to-day operations of New Orleans' Voodoo Music + Arts Experience. The company also acquired a 50% share of Atlanta's Shaky Festivals (Knees, Beats, and Boots). Shaky Festivals founder Tim Sweetwood is preliminarily involved in Levitation's booking.

This month also brought news that C3 and mega EDM promoters Insomniac have joined forces for what appears to be a medieval-themed electronic music festival called Middlelands. The three-day music and camping experience is slated for spring in Todd Mission, a microscopic city 130 miles east of Austin that hosts the Texas Renaissance Festival. Insomniac rep Nedda Soltani wouldn't specify the exact location or musical profile for Middlelands, but offered, "C3 has amazing draw to the non-EDM audiences and we bring the EDM."

The idea to hold a music fest among castles first came up locally via Sound on Sound Fest, which takes place next weekend, Nov. 4-6, some 45 minutes outside Austin at the ren faire grounds in McDade. SOS and Barracuda co-owner Johnny Sarkis shrugged off the Middlelands thematic concept overlapping with his first-year event that continues the musical curating of Fun Fun Fun Fest.

"I don't think C3 and Insomniac decided to copy our concept, found a renaissance venue, booked a festival, and executed its announcement in the five months since we announced Sound on Sound," he offered. "It's a coincidence. Having a music fest at a renaissance faire is just a fucking awesome idea.

"If I'm wrong, imitation is the highest form of flattery and it means we're on to something."

More significant to the local festival dynamic is the impact Middlelands could have on Euphoria Fest, Austin's EDM-focused campout also held in the spring. Euphoria's Chad Shearer said he views Middlelands' creation as a "testament to the popularity of the electronic dance music genre, which independent festival Euphoria has been at the forefront of in Texas."

Raw Dicks: Coinciding with the band's two sold-out farewell shows Sunday and Monday at Grizzly Hall, the Dicks have unearthed ancient live tapes for a new album entitled Raw! The recordings, cut with the original Austin lineup of Gary Floyd, Glen Taylor, Buxf Parrot, and Pat Deason at Raul's and Duke's Royal Coach Inn in 1981 and '83, capture the crazed energy of Austin's burgeoning hardcore punk scene and the gay-commie band at its forefront. King of confrontation, Floyd sings "Kill From the Heart" in a made-up language, then switches back to English for highlight "Dead in a Motel Room," powering up his gruff soulful howl while Taylor charges live wire guitar lines. Raw! also erects previously unheard songs "Watching My Friends Go Nuts" and "No Man's Slave," the latter featuring Floyd going berserk over Deason's pummeling drums and Parrot's chugging bass. Score a fresh copy at Grizzly Hall this weekend.

White Denim's "Ha Ha Ha Ha (Yeah)" soundtracks the video unveiling of Nintendo's long-awaited home/portable hybrid system: The Switch. The track, a single from the local quintet's 2016 LP Stiff, is featured prominently for three-and-a-half minutes of the clip, which quickly racked up 18 million views. White Denim frontman James Petralli confirms he's angling for an advance Switch and is contemplating throwing a party if he gets one.

Paul Oveisi, owner of West Sixth music hub Momo's (2000-11), fundraises for a new venture called Cosmic Coffee & Beer Garden that will include live music. He plans to emphasize homegrown talent and feature family-friendly music programming at the South Congress business. Invest in the project now via IndieGoGo in exchange for gift certificates.

R.I.P. Mitchell Vandenburg & Chris Porter: The two Austin musicians were killed when a semi plowed into their tour van while stuck in traffic on a North Carolina freeway last Wednesday. Drummer Adam Nurre survived and was hospitalized with serious injuries. The trio of roommates were touring as Porter & the Bluebonnet Rattlesnakes. Porter, 36, was a deep and gritty songwriter from Alabama who played in Back Row Baptists before launching a solo career. Vandenburg, 30, was the most energetic and interesting member in a dozen bands at any particular time. The Colorado native played bass with Carson McHone and Garner Sloan (as did Nurre) and also in Starlings, TN. He had an eclectic singer-songwriter persona dubbed Chester Bumblecrumb.

Buddy Guy lit up Antone's on Monday night with an intimate show for members of the Clifford Antone Foundation. "I believe I'm at home now!" barked the polka-dotted bluesman, signaling his first appearance at his favorite local club in over a decade. "When I first came here I said, 'Blues in Texas?' and they said, 'Yeah, bring it on.' When I came down here, it was at Sixth and Brazos. I walked in the door and said: Gypsy woman told my mother/ Just before I was born ..." That, of course, kicked off "Hoochie Cootchie Man." Later, Guy brought Austin resident James Cotton, a genre legend who played harmonica for Muddy Waters, onstage to trade licks while another Chicago blues transplant, Austin's Carl Weathersby, joined on guitar.

Trina Quinn is moving on from KUTX after this week, resigned "to go traveling indefinitely" with her family. The daytime jock, who joined the station in 2013, cedes her slot to Laurie Gallardo, who takes over mid-day, Mon.-Thu. Jack Anderson and Katie Bradley now cover the 8-11pm shift.