Can’t get on the bill at ACL? Start your own backyard fest. 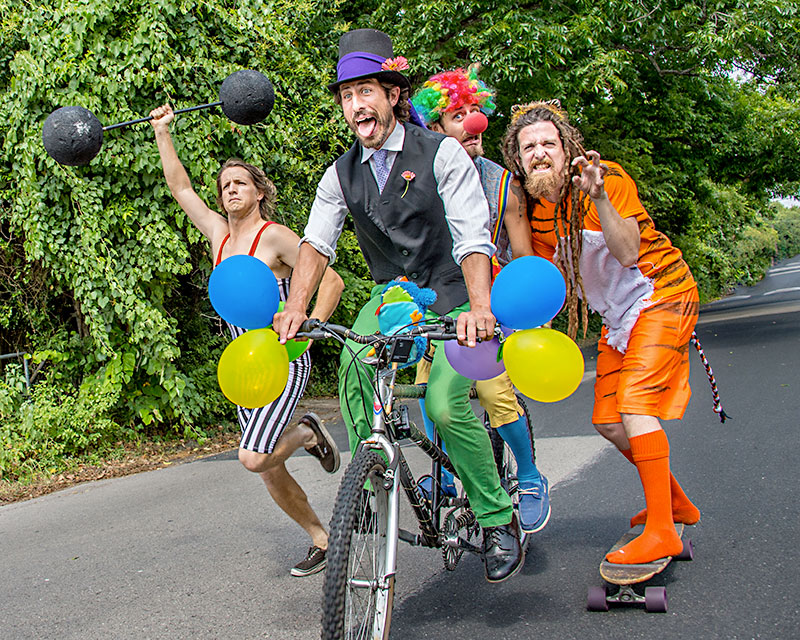 Full Service guitarist Tim "Bonesaw" Kepner beckons me from across Zilker Park. For my first in-person meeting with the hard-rocking Austin quartet, I've agreed (somewhat foolishly) to join their weekly ultimate Frisbee game, a completely foreign sport to me. Seasoned athletes 20 to 40 years my senior race by me on either side, flicking the elusive disc through the air with ease as I put my hands on my knees and gasp for breath.

Afterward, we regroup at Full Service Headquarters, a one-story house tucked in a quiet South Austin neighborhood where Bonesaw lives with his wife, Colleen, and his younger brother and drummer, David "Hoag" Kepner. Here, in a backyard practice and recording studio that also serves as Hoag's apartment, the siblings rehearse diligently alongside Full Service percussionist and rhythm guitarist Elliott "Smell" Lardon, who joined the band in 2004, and bassist Matthew Weber, who made his live debut on June 4.

Full Service Circus offers its fans an active role in the group’s career, creating a cottage industry without the backing of a label, manager, or concert promoter.

Currently, collectively, they're preparing the third Full Service Circus, a weekend-long "festival" organized entirely by the band that draws hundreds of fans from across the country to the band's backyard. The Circus promises more than a perfunctory 90-minute rock show, offering "golden ticket" purchasers a chance to jam with the band; record vocals over their favorite Full Service song; take a morning yoga class taught by Bonesaw; and get life advice from Vitali, a sagely hand puppet with a Slavic accent, voiced by Hoag, that serves as the band's "spokesmonster."

Breaking the fourth wall between audience and performer, Full Service offers its fans an active role in the group's career, creating a cottage industry without the backing of a label, manager, or concert promoter. The band invites fans of all backgrounds into their home, from lifelong diehards to unwitting journalists. Or as Hoag coyly describes HQ, the "halfway house."

A week later, the band's holed up inside their studio, rehearsing with militaristic precision to familiarize Weber with their 12-album back catalog. The bassist keeps up admirably – until Bonesaw and Hoag lock eyes and launch into an impromptu trashcan ending to one of their songs.

"They always do that brother shit!" yells Weber in mock exasperation, signaling that practice is over.

They've been pulling similar musical stunts for well over a decade. Bonesaw left Philadelphia in 2002 to pursue music in Austin, and Hoag followed a year later. They added Smell in 2004 and original bassist Anthony "Twinky-P" Pitt the following year. The four gigged locally and toured regularly with their high-octane hybrid of rock, rap, funk, and a hint of reggae that falls somewhere between the Red Hot Chili Peppers, Guns N' Roses, and 311. 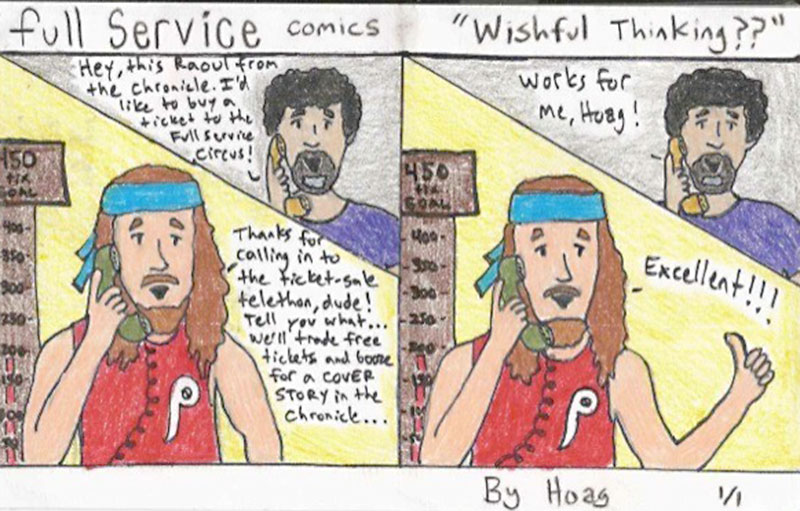 Full Service wasn't actually invited. And in fact, they never set foot inside the massive amphitheatres. Using a gas-powered generator, they set up in the parking lots or street corners outside every venue and played to any passersby who would listen.

Six months later, after catching wind of the Takeover Tour, 311 invited Full Service to open a run of shows, including a sold-out date at the now razed Austin Music Hall. The group later hit the road with renowned Sublime tribute band Badfish, playing large-scale clubs and theatres across the country. Yet as they shed their reggae roots and began exploring more acoustic, melancholy territory on 2010's Roaming Dragons, the band yearned for better ways to reach its demographic.

Enter the 20 Tour, which gave fans the chance to host a Full Service house show and invite 20 friends at $20 a pop. In return, the Austinites would play 20 songs of the host's choosing and give away 20 free CDs. If this downsizing feels counterintuitive, it's had the opposite effect on the guys.

"We've played huge shows," says Bonesaw. "We've played to thousands of people multiple times. But I have felt equally good after house shows with 20 people. I don't feel like it's different. They're both this great high. You feel like a fucking man."

At one of the 20 Tour stops in San Francisco, hosted by Bonesaw's old roommate, Full Service got a special surprise: a stack of surveys addressing why they weren't more successful.

"There's nothing interesting about being a band for 10 years," read one. "That's not a great story. It sounds like old news. You're in a band, you need to stay current."

The feedback, though brutal, sowed the seed that quickly blossomed into the first Full Service Circus in May 2013. The festival brought in 220 fans from 28 states with just six months' planning. Doubling down on the promotional efforts, the second Circus in October 2014 yielded 325 fans from 30 states and parts of Canada.

When second bassist Sean "Sunny" Eckel left the band in 2015, Full Service wobbled. In the time it took to add Weber to the lineup, they scaled back on Circus promotion to build the backyard apartment and studio. The result: a more stable and autonomous band at the cost of a greater Circus attendance.

"That's something I've been trying to work around, the growth of it," says Bonesaw, whose goal was 500 attendees. "It's not gonna be 500 unless a shit-ton of people buy tickets beforehand." 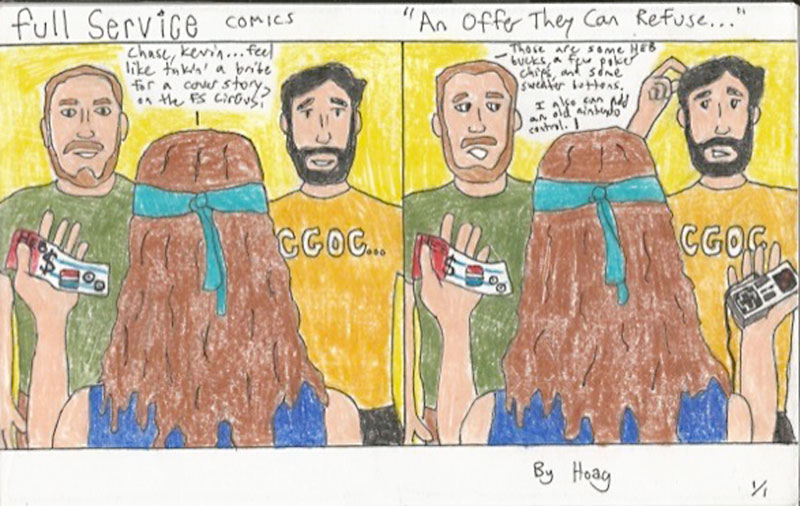 "That's the problem with goals, Bonesaw," responds Hoag in a paternalistic tone. "You don't always hit them, and they make you feel bad."

"It's not that we're jaded about ACL," reasons Hoag. "We just wanna fuckin' be on it!"

Full Service are far from bitter or unappreciative of the life they've made for themselves, playing music for people who genuinely value it and making lifelong friends and fans along the way. Bonesaw pauses to consider this before launching into the kind of sports analogy that could only come from a guy who grew up in the same city as Rocky Balboa.

"Which race am I in? Which competition am I in?" he asks. "I think it's the last-man-standing one. Because if you've been in the ring the whole time, and you're still standing at the end, that's my life. I did it."

Bonesaw: What's in a Name?

"Since he was saying it as Bonesaw, he became Bonesaw," Hoag says of his brother's metamorphosis.

"This turned into so much more, though," chimes in Smell. "We have 'fansaws,' because Bonesaw's obviously the most hardcore of all of us. So if you're doing something hardcore, then you become a 'saw.'"

The Full Service Circus takes place this weekend, Oct. 14-16, and includes sports at Zilker Park, electric and acoustic shows at Antone's Nightclub and Empire Control Room, performances by the band's side projects, and group swimming at Barton Springs. For a full schedule visit www.fullservicecircus.com.

A version of this article appeared in print on October 14, 2016 with the headline: Circus Freaks 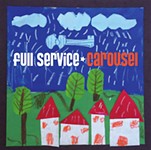