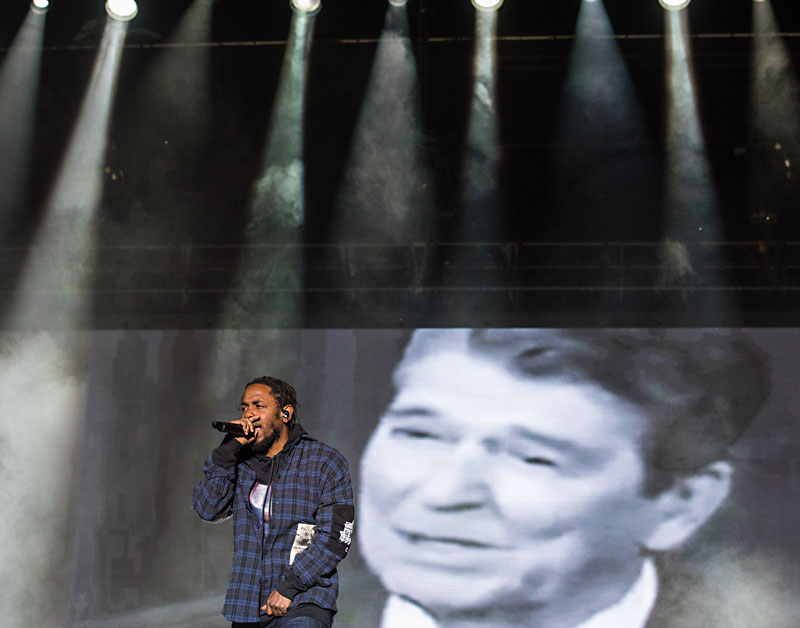 You Know, for Kids!

Now more than ever, kids own ACL Fest. Once a dad rock event where spawn were dragged along for headliners like Arc Angels, Wilco, and Neil Young, the 15-year-old festival is now largely populated with artists in their 20s performing for audiences even younger. Hip-hop, EDM, and pop dominate, with rock and Americana now minorities.

In the previous decade, teenagers would look at the lineup and not recognize 75% of the acts. Today, 30-, 40-, and 50-year-olds scratch their heads over pop singers like UK electro-stylist Jess Glynne and The Voice's Melanie Martinez, even as hordes of teens sing every word. When the latter, 21, emerged on the Miller Lite stage on Saturday from a giant crib – wearing a baby doll dress and bow in her hair, singing about sippy cups – the festival's new paradigm was as obvious as Friday's clear, cool skies in Zilker Park.

Difficult to pinpoint the sea-change moment where hip-hop and EDM began altering ACL's fingerprint. In the former category, Common (2007) led to Kanye (2011), who then opened the loading dock for headliners Outkast and Eminem in 2014, and Drake last year. Electrically speaking, Bassnectar's 2009 set paved the way for Skrillex and Disclosure to top lineups.

Today, it's kids leaving their parents – and their musical tastes – at home. Did you see how young Major Lazer's massive crowd was on Friday? They didn't care that Radiohead was playing at the other end of the park.

Radiohead unfolded impeccably on Friday, navigating a two-hour set that drew heavily from OK Computer, In Rainbows, and new LP A Moon Shaped Pool. All the while, Thom Yorke's voice emanated immaculate. Sunday headliner LCD Soundsystem, unchained from a new album, delivered exactly what their fans desired, but Kendrick Lamar on Saturday put on an ACL Fest performance for the ages.

The 29-year-old Compton rapper proved powerful, dramatic, Marley-esque, captivating youngsters and old heads alike. Booking him in 2016 is like booking Radiohead when OK Computer came out. Each time the MC addressed the crowd, whether it was to take requests or make note of a moment, he'd punctuate the statement with "Do you agree?"

Kendrick Lamar will go down alongside Al Green (2006) and Stevie Wonder (2011) as one of the best headliners in ACL history. "Do you agree?"

They Walk Among Us

Speaking of analog gear, Flying Lotus hung out with ...Trail of Dead's Jason Reese and Autry Fulbright at Barracuda for the triumphant record release show by Survive on Friday. The experimental producer, unquestionably the best electronic act on the ACL lineup this year, showed an affinity for Chronicle Music Editor Raoul Hernandez, who he thought looked like painter Bob Ross. In related news, local drummer Josh Blue spotted Metallica's Lars Ulrich at the Seventh Street H-E-B.

"He bought a soda ... His wife is taller than him ... More news as the story develops," texted Blue.

"I got arrested for smoking weed in Austin, Texas!" revealed Schoolboy Q during his Saturday set. The rapper was referring to an incident at a South by Southwest party for DJBooth.net in 2011, featuring him and Top Dawg Entertainment cohort Kendrick Lamar. Dizzy Rooster's security clamped down on TDE's crew for smoking herb backstage, leading to a scuffle and Q's subsequent arrest for possession of marijuana. "I don't see any police onstage right now," noted Schoolboy Q as he hit a blunt in front of 10,000 spectators.

I Was Country When Country Wasn't Cool

The thread of country music is nothing new to ACL, but this year's biggest Nashville futurists arrived at the nexus of significant career moments. Recent Grammy magnet Chris Stapleton drew a headliner-sized audience on Sunday that hung on his every lyric in an exquisitely understated performance. East Texas shit-kicker Kacey Musgraves impressed with hilariously trashy banter and instigated a stately chorus of female voices from a similarly giant physical demographic.

ACL's entrance lines were a frustrating mess, causing long waits for attendees who showed up midday on Saturday and Sunday. The scene played out as if TSA agents had slowed to half speed, sometimes as few as just over a dozen workers checking bags and patting down people as crowds ranging upward of 500 or more people were amassing in a claustrophobic scrum. Hopefully organizers can right the situation the second weekend with extra staffing. Or Adderall.

Sound bleed also remained an issue, even with a redesign that moved the rock-wall stage toward the entrance. The increasingly hip BMI stage is constantly being drowned out by the three stages to the west. Sound issues remain better than no sound at all, however: Main stage speakers at Samsung shut off briefly during Radiohead, a thankfully less intrusive version of what happened to Muse there in 2013.

Hard-charging Nashville alt-rockers the Gills made a splash at the BMI stage and promptly left town, but "Playback" has taken rainchecks on RZA/Interpol collabo Banks & Steelz, alt.country Kiwi Marlon Williams, and Cage the Elephant, who reportedly played with Clash-like intensity. Even Schoolboy Q, who shared the same slot, lamented, "I'm like you. I wish would have caught Cage the Elephant, too!"

"Playback" watched Mumford & Sons in virtual reality. Sitting in a swivel chair approximately 30 feet from the British folk-rock anthemists, I donned a VR headset with a Samsung phone plugged into the goggles and got lost in the live feed. The 360-degree experience beats a regular video feed because you can look wherever you want. It was like being onstage except I couldn't swat Marcus Mumford. The exclusive option is only available on-site in the Samsung Galaxy Lounge.