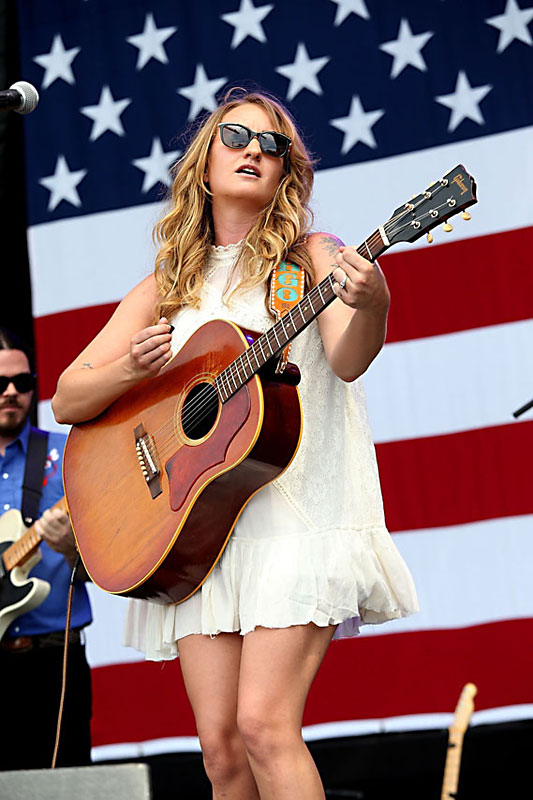 True Colors: Margo Price at Circuit of the Americas for this year's Willie Nelson Fourth of July picnic (Photo by Gary Miller)

Solo debut for country renegade Margo Price after years of trying to succeed with various rock acts in Nashville, where she moved at 20 from Illinois, Midwest Farmer's Daughter deserves all the success and praise it's reaping. Recorded at Memphis' historic Sun Studio on a budget of a pawned wedding ring and a sold family car – and turned down by every label on Music Row until Jack White's curiosity landed it on his Third Man Records – the disc's hard-luck tunes are authentically autobiographical and steeped in country tradition without sounding revivalist.

As such, she could single-handedly save the art form from the bro-minded grave and hat-act ignominy Nashville remains hellbent on digging for it. Price paused in the thick of a European festival tour to tell her tale via a trans-Atlantic phone connection.

Austin Chronicle: To start, please tell me the story about recording at Sun Studio and kissing the spot where Elvis sang.

Margo Price: [laughs] My husband and I were traveling through Memphis on the way to Texas. We thought, "We've never done this," so we took the tour of Stax [Records]. When we finally got to Sun, we were just having the best day – hearing all the history. At the end of the tour, you end up back in the studio. Everybody takes a photo holding the Elvis microphone.

I waited until everyone left the room, and the lady who conducted the tour told us Bob Dylan kissed the X on the floor where Elvis stood when he recorded there. So, I decided I was going to kiss the X, rather than take the photo. I got down on my knees and kissed Elvis and Bob Dylan at the same time [laughs].

AC: Now your husband sold the car and you pawned your wedding ring so you could record this album, correct?

MP: Yeah, we did. It wasn't something we wanted to do. We had exhausted every option and didn't want to do a Kickstarter. We had done that with the last band. I didn't want to hound everybody and do that whole song and dance. We began writing producers and managers to give us a loan or help us get into the studio, and no one was biting. They didn't care about the demos I had sent.

So my husband walked into the kitchen and said, "I'm gonna sell the car." I tried to talk him out of it, and he just wasn't having it. So, he went down Gallatin Road in Nashville where we live, and they have a lot of these places where you can sell your car and get money for them very quickly [laughs]. Then we began selling some musical gear, and of course, I went into the pawnshop too and hocked the ring.

Afterward, we booked studio time at Sun with Matt Ross-Spang, who worked there as an engineer, and he cut us a good deal. We went down there and did it in three days.

AC: And lo and behold, Jack White shows an interest in the project!

MP: Yeah! That was a surprise. We'd taken it to everybody in town, and people in Muscle Shoals and Memphis, Georgia, lots of different people here and there. Labels in Chicago, everywhere. Everyone was just saying no, and it was beginning to look dour. I was beginning to think, "We put the car up for nothing. We're never gonna get the money back."

Then my pedal steel player: "Hey, I heard through a friend that Jack's into what we're doing, and you're on the radar and he wants us to send the record in to him!" So, I got ahold of Ben Swank who works at Third Man and sent him the album. He came out and saw a show, then the ball started rolling quickly once they were involved. I'm really grateful.

AC: You've clearly listened to the classics, but you've processed it in a way that's contemporary. It's not nostalgic, like you're starring in Loretta Lynn: The Musical.

MP: Yeah, well, there's a fine line between keeping a tradition and rethinking and reinventing it, and making it your own. Making it new again. I like a lot of new music. I have a lot of different influences. I try to bring the thing from the day.

AC: These songs all sound intensely autobiographical. Are they?

MP: Yes, they are. Aside from one or two lines, everything is completely factual. The one line that gets misconstrued in "Hands of Time" is, "Soon I settled down with a married man." When I met my husband, he was married to someone else. She got pregnant with someone else's baby, and he tried for a very long time to get a divorce and she just wouldn't sign the papers. So they were separated when he and I met, but technically they were still married and they eventually got divorced [laughs].

AC: Your great uncle Bobby Fischer is a well-known Nashville songwriter. Did he have any hand in your career?

MP: No. When I first moved to Nashville, I was kinda pushed by my mom to meet him, because she thought he might be able to help me. I went over and played some songs for him, and he was just very honest. He said, "Y'know, you need to keep writing. You need to keep working." That was the only advice he gave me.

I think also, at that point, I realized there was no space for me in the country world whatsoever, because I knew I was very different from what was going on there. That's why I went more toward rock & roll. I felt like an outcast in that world, but there was still something about what I was doing that was country. Every time we would make a record with my band Buffalo Clover, it would get put in the "alternative country" category, and I would think to myself, "I don't want to put an acoustic guitar on the album!" I was trying to make a rock & roll soul record.

Still, we'd always get these reviews that would say things like "Dolly Parton with the Stones backing her" [laughs]. There was still something country about it. It was an interesting turn of events, how it all ended up happening. I didn't want to do country and folk and what people call Americana now. I just thought I'd never get accepted in that realm.

AC: You have a very distinctive voice, both as a singer and as a songwriter. There's no one set path. You take on everything from rockabilly to Bobbie Gentry's style on "Hands of Time."

MP: I love Bobbie Gentry! I think with that song, some of the feel was like Karen Dalton. I really love her, too. It's such a relaxed-yet-driving feel first thing on that record. Definitely going for a little of that. We were just talking about Bobbie Gentry the other day, how we haven't heard a peep from her in so long and how what she did was very cool and very different.

AC: Is she still alive?

MP: She is. We just haven't heard from her in so long. She has so many great songs: "Mississippi Delta" and "He Made a Woman out of Me." When I found her, I thought, "This is great! She melded the two things I love the most – soul and country music!"

A version of this article appeared in print on October 7, 2016 with the headline: Hands of Time